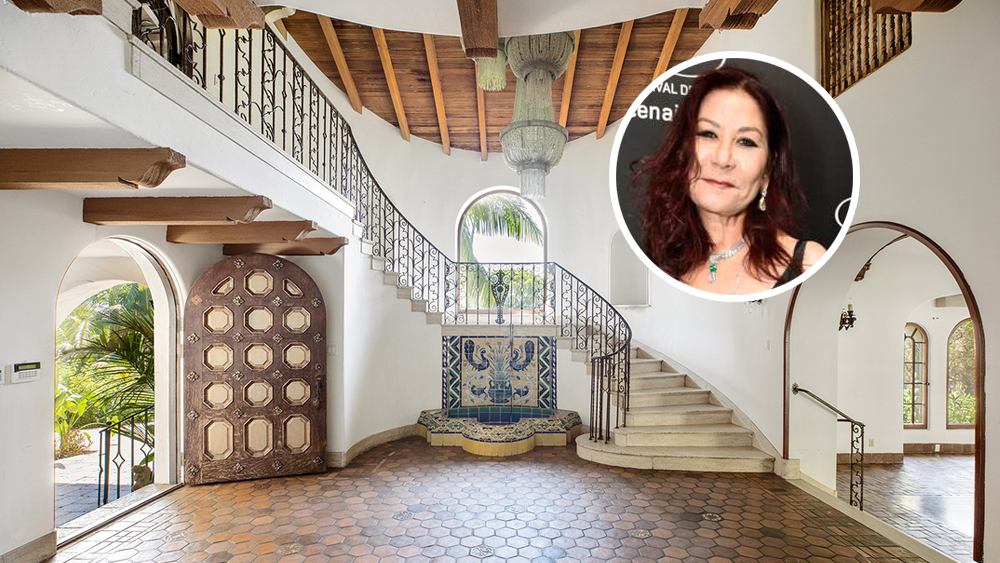 “It was a great big elephant of a place, the kind crazy movie people built in the crazy 20s,” William Holden as Joe Gillis narrates In the 1950 epic “Sunset Boulevard.”

Gillis wasn’t talking about this particular mansion, but he may as well have been. Originally built in 1926, the rambling Spanish Revival compound sits on a high knoll right atop the best section of Sunset Boulevard in prime Beverly Hills, lording over the peasants passing by far below. The nearly 9,000-square-foot house is chock-full of a treasure trove’s worth of original details — mosaic tilework, an irreplaceable front door, hand-stenciled ceilings. The foyer alone must be seen to be believed, and each room gives new meaning to the “if these walls could talk,” cliché.

Still, despite what the house would have you believe, the place has been dragged — kicking and screaming, no doubt — into the modern era. Out front, parked under the arched porte-cochère, there’s a white Lamborghini. That belongs to Anna Shay, owner of the mansion and an heiress to a fortune worth many hundreds of millions of dollars. Shay bought the house nine years ago, in slower economic times, for $9.4 million and is now ready to explore new realty ventures, listing the Sunset Boulevard property with a hefty but perhaps not unreasonable $16 million pricetag.

Whoever buys the estate will inherit a century’s worth of memories and Old Hollywood drama — urban legend says Shirley Temple lived in the house during 1936, when she was eight years old. Years later, during the 1940s and ’50s, the place was owned by Italian mobster Tony Milano, the Cleveland and L.A.-based mafia boss who controlled a vast network of nefarious business activity hidden behind the veneer of a respectable food production enterprise. Allegedly, of course.

Shay herself has elected to keep most of the mansion’s original features intact, though there are modern touches here and there — a white farmhouse-style sink and commercial-grade stainless appliances in the massive kitchen, new electronic driveway gates, and a sophisticated security system with cameras and other assorted surveillance technology.

The sprawling 1.14-acre property additionally contains park-like grounds with mature palm tres, rolling lawns, fountains original to the property, a four-car garage, substantial motorcourt, a paddle tennis court, swimming pool, and separate guest quarters. And in the main mansion’s basement is a so-called vault — also original to the property — where Shay’s only child Kenny Kemp, a self-described “passionate stoner,” stores his million-dollar collection of designer bongs. Call it the dank cellar, if you will.

As the only daughter of the late billionaire entrepreneur Edward Shay and his Japanese-American wife Ai-San, Shay was born into vast wealth. Her father founded Pacific Architects and Engineers (PAE), the contractor of defense services that specialized, at least partially, in top-secret work for the United Nations and U.S. government. In 2006, Anna Shay and her younger brother Allen sold PAE to Lockheed Martin in an all-cash, $1.2 billion deal.

Last year, Shay paid Dr. Phil’s son Jordan McGraw $5 million for a wildly decorated but smaller and more manageable mansion tucked into the mountains above Beverly Hills, so it’s not surprising that her iconic Sunset Boulevard home is now finally ready for its close-up, as Norma Desmond would say.

The US is actually making Ukraine WEAKER! #shorts
How To Buy a House in the USA
Flipping houses. South Side Chicago. Kitchen. NEGC Remodeling. Click subscribe to see our projects.
Skyrocketing Prices Cause Businesses To Close In The West
Housing: What to know before buying a home in 2023