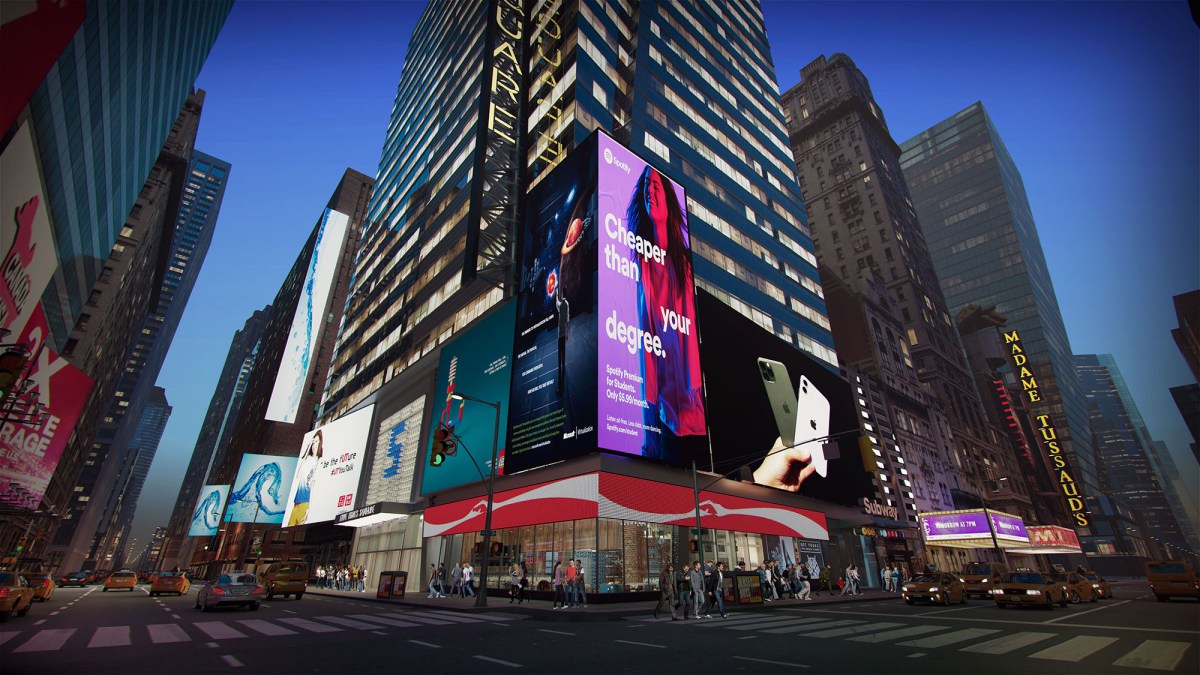 It’s battle stations at the Crossroads of the World, where Scott Rechler’s RXR Realty is ramping up to re-fill its 39-story, 1.1 million square-foot 5 Times Square, which will soon be empty.

It opened at the corner of Seventh Avenue and West 42nd Street in 2002 as one of the quartet of commercial giants that defined the “new Times Square.” Ernst & Young was former owner Boston Properties’ anchor tenant.

But in 2022, EY, as it’s now known, will move to Manhattan West. The retail spaces are already vacant. RXR has its work cut out now that leasing has slowed to a crawl, Times Square remains mostly desolate, and companies are putting oodles of space up for sublease.

RXR, which owns the tower in a joint venture with investor David Werner, is spending $50 million more on upgrades — notably, an elevator connection for the first time between the lobby and the huge subway station below.

RXR managing director Bill Elder and his team of brokers politely chuckled when we asked our dreaded, pandemic-times question:

Are you guys crazy to think it can be done?

Elder assured us, “We’re not out of our minds. With the election over and the vaccines announced, people are starting to become re-engaged with the market. Remember, there were 19 million square feet of [corporate space] requirements before the pandemic, and most of it is still out there.

“I think by mid-year 2021, a lot of people will be outsourcing solutions to their space needs.”

Joshua Strauss, leader of a Newmark team on board to market 21,000 square feet of retail space, agreed, “We can take our time putting together our market approach in a very deliberate way.”

RXR executive vice-president Whitney Arcaro concurred. “We are fortunate to be an institutional owner that can take advantage of the lead time,” she said. RXR’s portfolio boasts 26 million square feet of metro-area offices, of which 19 million square feet are in the city.

The landlord’s confidence in 5 Times Square is based on its central location, mass-transit proximity, and column-free floor plates of 31,000 square feet with floor-to-ceiling windows.

In addition to the new subway link, RXR is replacing obsolescent exterior signage with giant LED displays, redesigning the lobby, and creating a tenants’ amenity center to be managed by a big-name food-and-beverage operator.

RXR must compete for office tenants with newer properties — including in the Hudson Yard-area towers and at 425 Park Ave.

But 5 Times Square’s rents will run from $80-$100 per square foot on higher floors — a bargain compared with the cost at other locations. CBRE’s Robert Alexander, Ryan Alexander, Michael Affronti and Taylor Callaghan will sift offers.

Strauss declined to cite asking rents for the stores. He said tenants will likely be large corporate users, including “experiential” venues, entertainment companies and an array of traditional retailers.

“We’re not interested in landing the first tenant who comes along, the bottom feeders,” he said. “We are patient.”

The “vast majority” of the Yard’s total 5 million square feet are leased, according to Navy Yard chief development officer Johanna Greenbaum. Rents at many Yard buildings run about $40 per square foot.

But higher numbers are in store for top floors of what are known as Building 303 and Building 77, which are hitting the market for the first time.

Gerla is targeting tech and creative companies, many of whose employees “live close to the Navy Yard, some within walking distance,” he said.

The Brooklyn Navy Yard Development Corporation earmarked $187 million to convert jumbo Building 77 from a former US Navy facility into a design and light manufacturing hub. Building 303, in the Admirals Row section developed by studio founder Doug Steiner, opened this fall for light manufacturing and creative tenants.

Greenbaum attributed the Yards’ leasing success to close cooperation with tenants during the pandemic and to “the proximity of workers, a huge contributing factor. The creative workforce largely lives in Brooklyn.”

Gerla said, “Johanna has done an incredible job of creating a real urban eco-system” out of the Yard’s diverse tenant mix. For example, women’s apparel brand Lafayette 148 employs creative designers and seamstresses “who all live in Brooklyn,” Greenbaum said.

And at One Vanderbilt …

The insatiable leasing machine plows on at SL Green’s One Vanderbilt. The latest new office tenant is executive search/advisory firm Heidrick & Struggles, which just signed a 12-year lease for 36,031 square feet on the entire 25th floor.

There’s a substantial new retail lease as well. One Medical, a brand of 1Life Healthcare, signed for 4,924 square feet on the ground and second floors. One Medical offers membership-based primary care and other health services.

3 Real Estate Investing Strategies You Must AVOID in 2023
Flipping Houses and Landlord Business on the Rise
Housing Market: Will 2023 Be Another 2008 For Real Estate Investors?
Are you ready to buy your next real estate?
Housing market crash: NOT everywhere YET, here’s why!