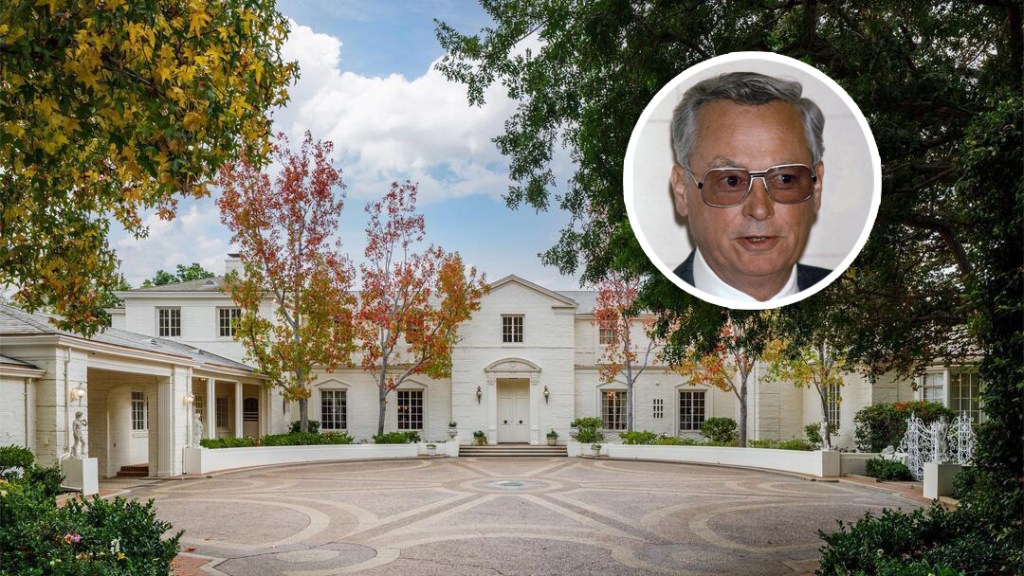 Just over a year after his September 2019 death, the longtime Los Angeles estate of the billionaire philanthropist Barron Hilton has become available for sale, packing an attention-grabbing — but arguably not unrealistic — $75 million asking price. Known as the Jay Paley Residence after its original owner, the 15,000-square-foot, vaguely AR-15-shaped mansion was built in the 1930s and sits at the crossroads where the neighborhoods of Beverly Hills, Holmby Hills, Bel Air, and Benedict Canyon all collide, though the location is most frequently considered Holmby Hills.

Completed at a reputed cost of $100,000, the rambling house was designed by pioneering Black architect Paul R. Williams and contains no fewer than 32 rooms, nearly all of them grandly scaled with elaborate decorative moldings. Described in the listing as a “rare and stellar interpretation of traditional English Georgian architecture,” the structure is surrounded by a highly coveted, mostly flat lot of 2.55 acres, all of them elegantly landscaped with rigidly geometric lawns, formal gardens, and mature trees.

Invisible from the street behind tall iron gates and a wall of ficus hedges, the property is accessed via a long, curving driveway that dead-ends at a substantial motorcourt ringed by liquid amber trees. Inside, public entertaining spaces are categorically vast and include a fireplace-equipped formal dining room with gorgeous parquet hardwood floors and wood-paneled walls, a step-down living room with another fireplace, a more intimate den, and separate billiards room.

Not pictured in listing photos is the commercial-style kitchen, which is assuredly large enough to cater a fundraising banquet for any prominent politician, or a movie theater that reportedly can seat 80. A delicately curved staircase bypasses a crystal chandelier on its way to the upper level, where there are two master suites, each outfitted with a private bath, dressing room, and romantic garden views. Three more family bedrooms round out that floor, also accessable via an elevator. Naturally, the estate includes discreet staff and guest quarters, plus a separate staff motorcourt and driveway.

Out back, loggias accented by long, sinuously slender columns spill out to pancake-flat expanses of grassy lawns. At the far rear of the property lies an iconic swimming pool — best-known as the Zodiac pool — which incorporates all 12 signs of the zodiac in colorful, imported tiles arranged in a sunburst pattern. Just beyond the pool is a Moderne-style poolhouse, also designed by Williams, that predates the main house and contains a wet bar and games room. The pool house was featured on the cover of Architectural Digest in 1933, and appears to remain in shockingly original condition. Other estate amenities are no limited to numerous fountains, reflecting pools, and a full-size tennis court with viewing pavilion.

Hilton, the second son of hotelier Conrad Hilton, acquired the architecturally pedigreed property in the early 1960s for a paltry $475,000, an amount equivalent to several million dollars in today’s money but still an insignificantly tiny fraction of its current value, which is only further enhanced by its sublime location.

The compound is surrounded by some of the most expensive homes in California, lying just a quick skip up the road from the Jack Warner estate, purchased by Jeff Bezos earlier this year for a record $165 million. It’s also just around the corner from the massive Fleur de Lys compound, which sold for $88.3 million in 2014 to Russian billionaire Yuri Milner.