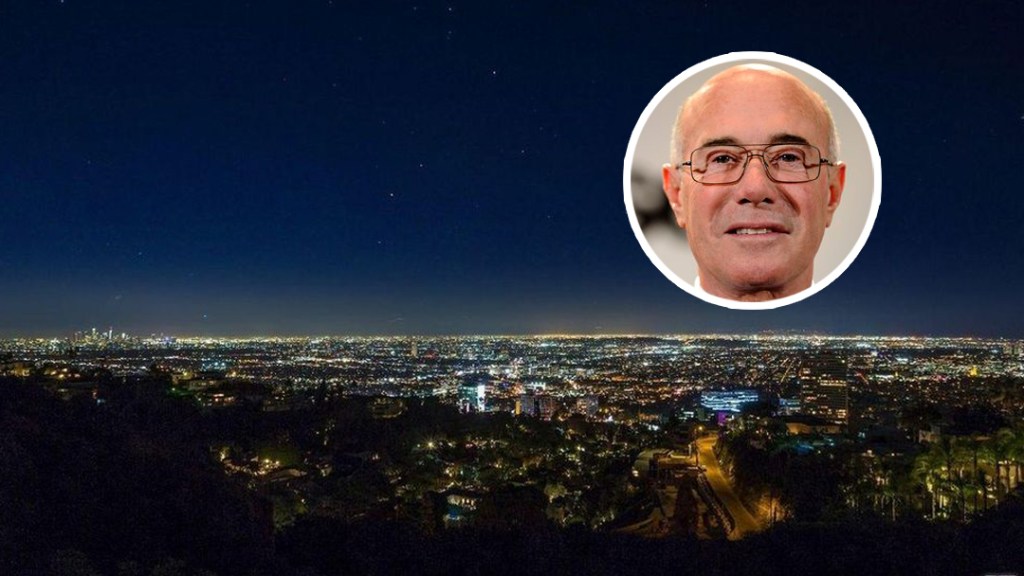 So the tongue-wagging Platinum Triangle real estate scuttlebutt goes, billionaire real estate developer Randall Van Wolfswinkel has over the last year or so peeped and poked around just about every trophy home for sale in Beverly Hills with a price tag under $100 million. But, in the end, the property mad developer decided on an undeveloped lot along what is arguably one of the best and most expensive streets in the famously high-priced Trousdale Estates area of Beverly Hills, paying $33.75 million in an off-market deal for a vacant one-acre parcel that was sold at a multimillion-dollar profit by David Geffen.

Set along a high, ridgeline cul-de-sac of nine homes, each with a more compelling bird’s eye view than the last, the scraggly, unkempt property has been sold half a dozen times over the last 12-or-so years, and somewhat improbably in the process transformed from a $7 million house to an almost $34 million vacant lot.

The property was owned by late SoCal real estate developer Nathan Shapell until his heirs sold it in 2007 for about $7 million to British entrepreneur Peter Jones who held on to it until early 2013 when it was sold for $12.5 million. The buyer, a corporate entity tied to East Coast-based financier Ed Parisi, tore the existing house down and sold off the newly vacant property in March of 2014 for $15 million to Emirati businessman Khadem Al-Qubaisi.

Turns out Al Qubaisi was neck deep in the sprawling, multibillion-dollar 1MDB scandal — he was sentenced last year to 15 years in prison for corruption and money laundering — and as a result the Department of Justice stepped in to orchestrate a 2016 sale for $22.4 million to private equity billionaire Alex Soltani, the same guy who’d previously paid $32 million for Dr. Dre’s former house above the Sunset Strip and tore it down to make way for another even more lavish house.

Soltani owned the Trousdale Estates property for just two months before he flipped it for $32 million, an eye-watering profit of almost $10 million, to Thai businessman Sumet Jiaravanon whose estimated $4.3 billion fortune means he can comfortably afford to weather the $2 million loss he took on the property when it was sold to Geffen in mid-2019 for exactly $30 million.

Van Wolfswinkel’s plans for the property aren’t immediately known, but presumably he’ll do what real estate developers do and build a house. He’s likely to bring in his own team to execute his own vision, but he does have the option of picking up fully engineered plans that one of the previous owners had drawn up by designer Michael Palumbo and architecture firm Shubin + Donaldson. Those plans are certainly grandiose and call for a 24,000-square-foot minimalist pavilion with seven bedrooms, 14 bathrooms, a bowling ally, a private nightclub, a wellness center and beauty salon, and a 140-foot-long vanishing edge pool.

Whatever Wolfswinkel builds it will likely be designed to fit in with its over-the-top immediate neighbors. A couple of doors down is the ultra-modern mansion Minecraft creator Markus Perrson bought in 2014 for $70 million and next to that is a garish, vaguely Moorish-inspired mansion that was once owned by late comedian Danny Thomas and sold in early 2017 by Lebanese-Nigerian billionaire Gilbert Chagoury for $65 million to Evan Metropoulos, whose equally deep-pocketed brother bought the Playboy Mansion in 2016 for $100 million.

Immediately next door to Van Wolfswinkel’s new property is the so-called Opus residence, a 20,000-square-foot ultra-luxe spec-built extravaganza that was originally listed for an outlandish $100 million and, after the price plunged to $59.5 million, has just been sold for a still elephantine $47 million to local real estate developer Josephine Yeh. And, to the other side is a massive, nearly completed contemporary mansion built around a huge courtyard by private equity billionaire David Kabiller on two lots he hoovered up in two transactions, the first in 2015 and the second in 2016, for a total outlay of $50.9 million.

Van Wolfswinkel grew up in Santa Barbara but has long been based in Texas where he owns a suburban macmansion-sized condo atop a downtown Dallas tower as well as a 13,000-square-foot mansion in hoity-toity Highland Park, a leafy and exclusive neighborhood aptly described by some as the Beverly Hills of Dallas. Back in California, the gloriously named and deep-pocketed property tycoon has recently traded one property for another. Just about a year ago he shelled out close to $17.9 million for an oceanfront compound in the low-key but exorbitantly expensive seaside community of Montecito, and tax records show that just a couple of months ago he sold another Montecito home, brand-new contemporary located directly across the street from the beach, for almost $17.5 million to Alicia Goetz, wife of Silicon Valley venture capitalist Jim Goetz.

As for Geffen, he’s made plenty of his own real estate moves lately. He sold his ten-acre spread in the moneyed heart of Beverly Hills earlier in the year to Jeff Bezos for a record-setting $165 million and downsized, if it can legitimately be called that, to a not-quite-3.5-acre estate in another plum pocket of the 90210 that he picked up over the summer for $65 million from showbiz scion Casey Wasserman, grandson of Hollywood pioneer Lew Wasserman and himself a successful sports and entertainment entrepreneur who serves as chairman of the Los Angeles 2028 Olympic committee. Geffen, whose mega-yacht Rising Sun measures more than 450-feet long, has long maintained a significant foothold on the East Coast as well. He keeps a 12,000-square-foot penthouse along New York City’s Fifth Avenue, which he scooped up in 2012 for $54 million, as well as an oceanfront estate along one of the finest streets in East Hampton, N.Y., that was acquired in 2016 for a staggering $70 million.

More Russia fear-mongering! When is this madness going to end? #shorts
Buying A $5,000 House: Cheap Houses For Sale 😱
Housing market ‘will be struggling for a little while longer,’ economist says
3 Real Estate Investing Strategies You Must AVOID in 2023
Is @elonmusk trolling? #shorts