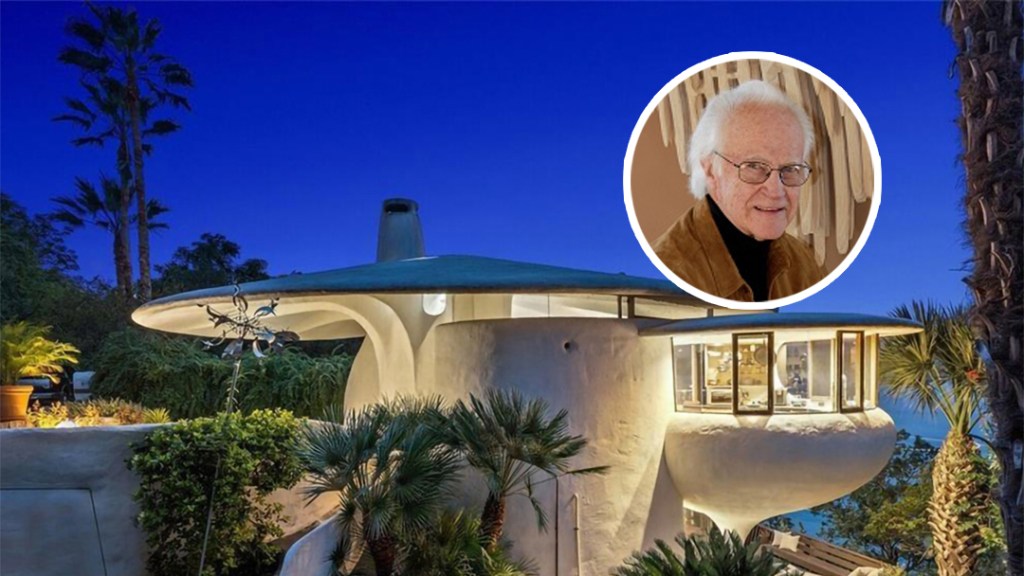 One of Austin’s most iconic homes recently burst back onto the market with a revised asking price of $1.75 million, significantly down from its original $2.2 million. Known as Sand Dollar House, the structure was designed by Frank Lloyd Wright apprentice John Covert Watson and is located on the scenic shore of Lake Travis.

Sand Dollar House is also colloquially called “the Mushroom House.” From the street, it’s easy to see why — the place resembles a little white fungi perched on a high bluff above the lake. From the air, however, the house morphs clearly into a giant sand dollar. Originally built in 1979 as a second home and studio for Eugenia Hunt, an artist whose name has fallen into obscurity with the sands of time, the eccentric residence boasts three bedrooms, 2.5 baths, plus several decks that provide stunning views of Austin’s surrounding Lakeway neighborhood.

Watson’s Austin family roots run deep in the city. He attended Austin High School, graduated from the University of Texas and is perhaps best known around town for helping preserve the land around Hamilton Pool — a place he likened to a “Roman grotto.” He began studying under Wright while the legendary architect was designing the curvilinear Guggenheim Museum in New York City during the 1950s.

Although Watson’s work is sometimes compared to John Lautner — another, better-known student of Wright, Watson’s constructions have a much more whimsical, organic feel to them versus Lautner’s more masculine, clean-lined aesthetic.

Beyond a glassy front door lies the great room, which contains the home’s open living and dining areas. Sleek white bricks line the floor, while sunlight streams in through teardrop-shaped skylights and a wall of glass framing the cinematic view across the lake. The space really does feel akin to being inside a sand dollar — or mushroom, for that matter — with curved, Gaudi-esque white columns that resemble organic growths, and not a straight line in sight.

The living room features a Kiva-esque fireplace while the dining area is situated next to a cantilevered wood bench that runs below the windows. The curved spaces open to dual semicircular balconies, both of which are ideal spots to sip an iced sweet tea, or maybe something stronger, while watching boats skitter across the sparkling lake.

While obviously not made in this century, the boho-chic kitchen doesn’t feel particularly dated. Curving countertops are covered by iridescent blue mosaic tiles, appliances are up-to-date, and a bay of windows offers lovely view into the garden. (Just watch your head around the pot rack hanging above the impractically tiny island!)

An undeniably cute spiral staircase with wheat-colored wood treads leads to the lower level, where all three of the bedrooms are located. Oversized windows flood the master suite with light, and there’s a unique lower level sitting area that spills out to a private deck. The master bathroom’s got a funky ’70s psychedelic vibe about it, with its groovy curved counters, garden-style tub, dazzling emerald-green mosaic tiles, and an open shower daringly positioned next to a large window.

The property itself isn’t particularly big, but the lot still packs in bunches of artfully untamed greenery, plus plenty of outdoor deck space. For those adventurous enough, a wooden staircase leads down to the lake’s edge, where you just might find an actual mushroom.

The listing is held by Michelle Jones and Todd Grossman of Compass.

Why Home Prices will CRASH by 30% in 2023
Housing Market and The Economic Recession: A Look into 2023 Real Estate
The Best Money Making Real Estate Investing Strategies
Is Ukraine seriously going to try to take Crimea? It was never theirs to begin with! #shorts
Are Mandates coming back?!?! #shorts