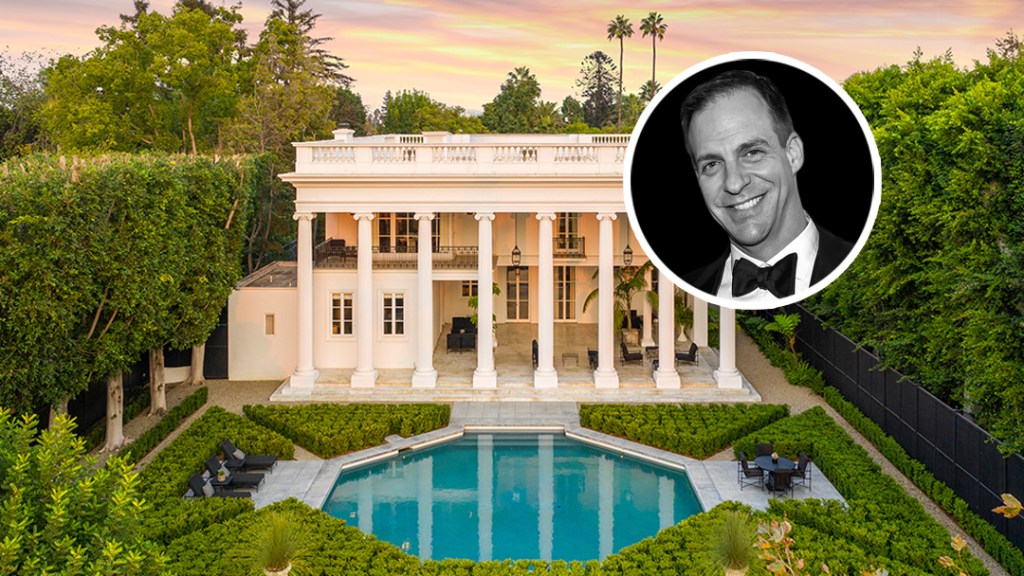 In early 2016 veteran entertainment executive Patrick Moran — the former ABC Studios president signed an overall deal with Amazon Studios last year to develop TV series — shelled out $5.75 million for an undeniably palatial though pitifully neglected neoclassical villa in the high-fallutin’ heart of L.A.’s tony Hancock Park neighborhood that now, after a dazzling and no-doubt extraordinarily costly restoration and update, is back on the market with a princely price of $13.65 million.

Designed by illustrious architect Wallace Neff and built in 1960 for Ralph J. Chandler, shipbuilding magnate nephew of late Los Angeles Times publisher Harry Chandler, the by-any-standard grande dame of a house was inspired by the Claude-Nicolas Ledoux-designed Pavillon de Musique, an 18th-century structure built for Madame du Barry, the pampered last maîtresse-en-titre (official mistress) of Louis VX, on what was then the extravagantly landscaped grounds of the Louis XIV-commissioned Château de Louveciennes, about ten miles outside Paris.

Beyond the four sugar-white fluted Doric columns that front the magnificent mansion, newly installed flannel-grey and white checkerboard marble floors extend from the oval-shaped foyer, with its 30-foot ceiling and flamboyantly embellished doorways, in to a long gallery that passes an elegantly curved staircase before it opens to a grand terrace that looks over the swimming pool and across the 9th fairway of the prestigious Wilshire Country Club.

To one side of the foyer, a formal dining room is wrapped in probably hand-painted and fearsomely rechereché wallpaper, and, on the other side, an office with creamy yellow moiré wallpaper includes a private powder room and a wet bar. Sensuously curvaceous, modern and spare furnishings act as a visual counterweight to an intricately carved antique fireplace and elaborate moldings that festoon the ceiling in the ballroom-scaled main salon. Unusually and fantastically tall floor-to-ceiling French doors allow the showy room to spill out to the backyard. Walls in the chef-accommodating kitchen gleam with white tiles that extend all the way to the high ceiling, while the adjoining breakfast room is plenty big enough to comfortably accommodate a comfy lounge area.

Upstairs, two en suite guest bedrooms are joined by a library wrapped in mossy-green wood paneling. A fireplace warms the room, a wet bar means no need to scoot downstairs to refresh cocktails and a wall of glass leads out to a balcony with a verdant view over the golf course. Painted the palest of grey, the main bedroom is a luxuriously sedate, monochromatic space with floor-to-ceiling windows and a floridly carved fireplace that looks like it could have been ripped right out of Versailles. The walk-in closet/dressing room is spacious and lined with lighted wardrobes, and the bathroom is awash in a mausoleum’s worth of thickly veined white marble.

Somewhat surprisingly, the house sits atop a subterranean garage that holds seven cars, while a discreet interior staircase ascends to a vast and as-yet developed roof terrace. At the back of the house, a regally voluminous double-height portico held aloft by eight more fluted Doric columns steps down to a hexagonal swimming pool that is closely bordered by a geometric configuration of tightly planted sculpted boxwoods.

Should the Hancock Park house not be — ahem — authentic enough for architecture snobs and well-to-do Francophiles, the original Pavillon de Musique (and the 14-and-some-acres over which it presides) is also available for purchase, but through Sotheby’s Int’l Realty and with an undisclosed but to-be-sure gag-worthy asking price.

Who knows where Moran may next set his real estate sights, but another dignified mansion in Hancock Park doesn’t seem such a far-fetched guess as he previously owned a stately faux-timbered English Tudor in neighborhood that he scooped up in early 2014 for almost $3.6 million from horror film maestro Rob Zombie and extensively renovated, updated and had photographed for Architectural Digest before it was sold in late 2016 for $7.88 million.

Real estate outlook 2023: What buyers, sellers, and investors need to know
Flipping Houses 101
Why Home Prices will CRASH by 30% in 2023
Cheaper to rent than buy in most major U.S. cities
Is Ukraine seriously going to try to take Crimea? It was never theirs to begin with! #shorts