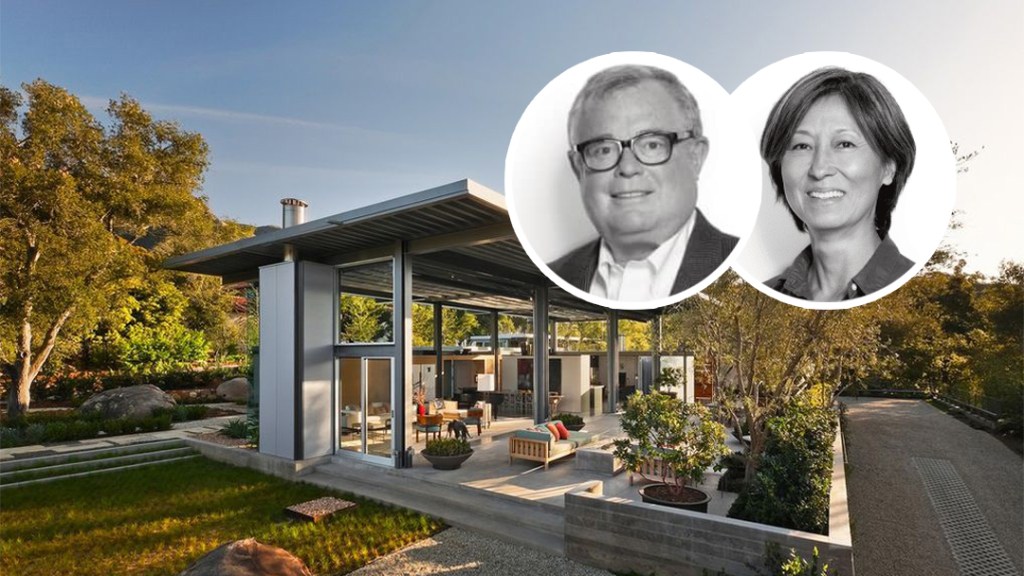 Mansions that populate the hills of Santa Barbara and the surrounding environs — Montecito, Carpinteria, Hope Ranch — are famously known for their Spanish Revival and Mediterranean architecture, but there are also world-class modernist gems there, too, midcentury icons like Richard Neutra’s Tremaine House and the Erdman House by Lutah Maria Riggs. And then there’s the shelter magazine-published Barton Myers confection, known simply as the Montecito Residence, which recently sold for $7.2 million.

Though it sports plenty of midcentury hallmarks — soaring walls of glass, a functionally minimalist floorplan, seamless indoor/outdoor living — the Montecito Residence was built barely a decade ago, completed in 2009 for Chicagoans John and Dorothy Gardner. The Gardners held onto the .94-acre property until this year, when they sold it to Silicon Valley entrepreneurs Mark Armenante and Young Sohn, co-founders of Vlocity, the cloud-applications software company acquired by Salesforce for $1.3 billion earlier this year.

Hewn almost entirely from steel and glass, Myers’ creation spans about 4,000 square feet of living space, with 2 bedrooms and 2.5 baths. Inside, there are soaring ceilings and an emphasis on light and shadow, with multi-pane glass doors that retract vertically, disappearing into the ceiling — rather like the residential version of Lamborghini’s scissor doors. For less playful traditionalists, there are also conventional horizontal glass doors, all of them opening to gardens landscaped with colorful, drought-tolerant plantings.

The house is configured with two distinctly separate wings — one with the public reception rooms, the other featuring bedrooms and other private spaces — linked by an all-glass passageway. The first wing contains a mammoth great room with living and dining areas bisected from a custom Bulthaup kitchen by a tall wall; the second features two large bedrooms, both equipped with sumptuous ensuite baths that open to a walled Japanese-style courtyard.

There’s also a separate one-bed, one-bath guesthouse on the property, plus expansive terraces for al fresco lounging or entertaining. While the industrial-chic style of the estate isn’t for everyone, the main home’s hard-edged interior spaces are visually softened by warm neutral tones and abundant natural light seeping in through vast windows.

Armenante and Sohn, both in their 60s, were initially longterm business partners and executives at Veeva Systems, the publicly-traded Silicon Valley cloud-computing company that made them both incredibly wealthy. In 2013, Forbes estimated Armenante’s Veeva stake was worth $659 million; Sohn, for her part, had a $643 million net worth.

But since then, the pair have only grown richer. In 2014, they co-founded Vlocity, the cloud software provider that was gobbled up this February by Salesforce in the aforementioned $1.3 billion deal.

A quick glance through property records reveals Armenante and Sohn own a major property portfolio that includes well over $50 million in luxury residences. Their separate and joint holdings include a historic mansion in San Francisco’s Presidio Heights neighborhood, purchased for $18 million in 2014, a $16.3 million penthouse in a particularly famous New York City skyscraper, and a $5 million condo in Manhattan’s Chelsea area. There’s also a multimillion-dollar mansion in Lake Tahoe’s Martis Camp, the exclusive guard-gated community known for its popularity with tech tycoons and other Bay Area billionaires.

Are you ready to buy your next real estate?
Expert warns of ‘meaningful’ damage in housing market that’s ‘not normal’
US Real Estate Market Forecast 2023: Insights for Buyers & Sellers in the Housing Market
Real estate outlook 2023: What buyers, sellers, and investors need to know
Why does the US think it’s OK to try and RULE the WORLD?!? #shorts