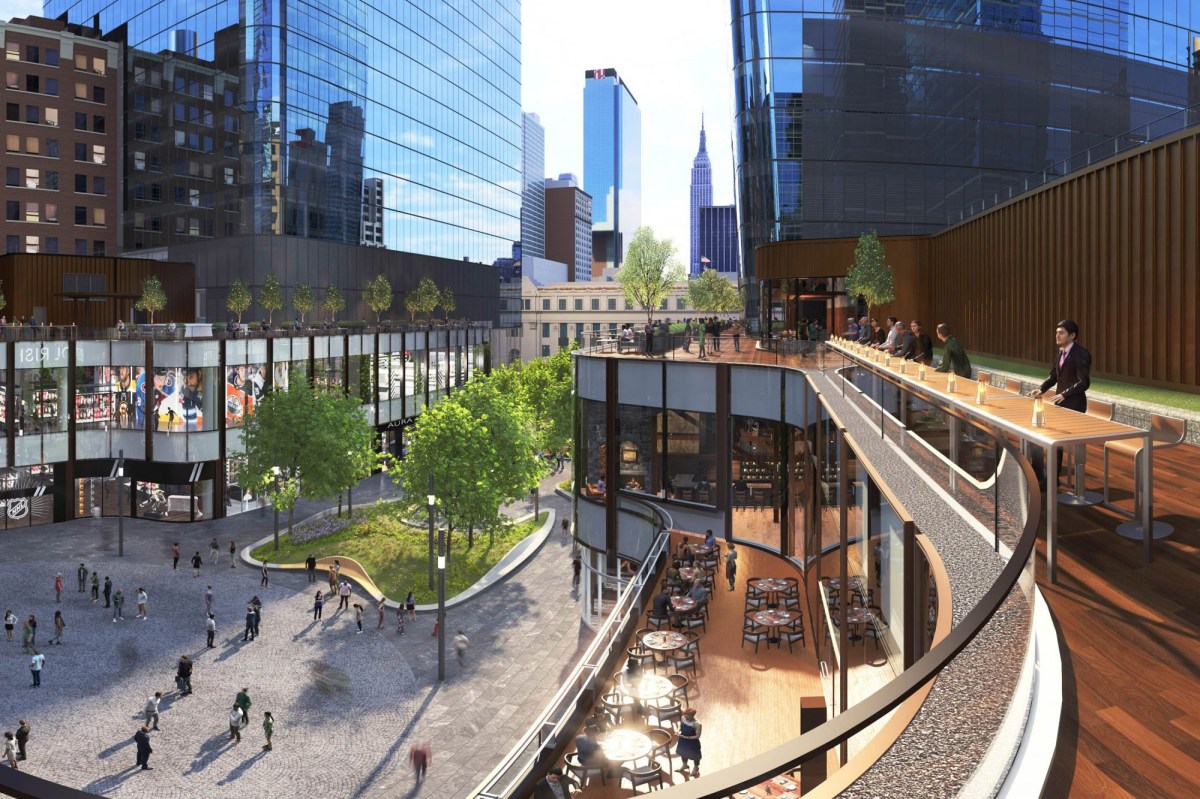 The perimeter plywood has come down, a second huge office skyscraper has begun to rise and — ­COVID-19 be damned — the ambitious Manhattan West complex is at last coming into focus.

Now equally tall, 58-story Two Manhattan West’s steel infrastructure is rising rapidly after a COVID-related pause. It will be completed in 2023 with law firm Cravath, Swaine & Moore as the anchor tenant.

Taking up the entire vast superblock bounded by Ninth and Tenth avenues and West 31st and 33rd streets, the $4.5 billion Manhattan West was overshadowed by Hudson Yards, but it’s a mega-project in its own right. It already has the fully rented Eugene apartment tower, the office building known as 5 Manhattan West and a giant Whole Foods.

Now Brookfield has shared a timetable for other elements. The first quarter of 2021 will see the launch of a 40,000-square-foot Market Hall and a food court to include the likes of Sam’s Crispy Chicken and Umami Burger.

The project’s most unusual feature, an NHL-programmed seasonal ice rink, is set for the winter of 2021-22.

Apartment-style hotel operator Mint House has taken over the floors at 70 Pine St. that were previously run by Lyric. The growing, tech-oriented hospitality company will handle the landmark tower’s 132 short-term rental suites on Floors 3-6.

Mint House is the third operator to run the suites designed for corporate travelers at 70 Pine, the highly successful, 66-story former office tower that was converted mostly to luxury apartments.

It doesn’t yet mean a mass return to offices, but Kastle Systems’ authoritative Back-to-Work Barometer says New York saw the nation’s highest-percentage increase in occupancy in its most recent report for the week ending Nov. 10.

The Big Apple posted a 4.2-percentage point rise to 17.3 percent, followed by Chicago’s 3.4-point increase to 19.6 percent. The leading cities for physical office occupancy were Dallas at 42.2 percent and Houston at 39.7 percent.

With many saying the COVID-19 real-estate turndown is like no other, heed these observations from CBRE superstar dealmaker and tri-state CEO Mary Ann Tighe.

“Why does every downturn feel like the first time?” she asks.

Pointing out that New York has had a “deeply cyclical economy going back to the first Dutch settlement four centuries ago,” Tighe reminds us, “Downturns have laid the foundation for change and ultimately regenerated our city.”

Among other examples, she cites that Rockefeller Center was launched “in the depths of the Depression” and that the Durst family bought a 42nd Street blockfront for a penny’s-worth $50 per square foot in 1996 and built 4 Times Square, which is today a $1 billion asset.

She concludes, “For businesses seeking the moment to strike in the Manhattan market . . . for a company confident in its long-term business model, it’s time to go long with a lease.”

For those unsure about the long term, “Landlords are now more accommodating of short-term deals than they’ve been in decades.”

Tighe wrote that in the New York Observer in 2009. But they’re timely enough for November 2020.

They proved prescient — and they’re words to the wise today.

Residents of La Central, the affordable-housing complex in The Bronx’s Melrose neighborhood, will soon have more to munch on.

The Hudson Companies’ project that will be home to 992 families has signed three new eatery tenants: Taste of the Bronx Café, Metate Authentica Comida Mexicana and an organic grocery.

The eating spots and a just-signed garage account for 43,000 square feet at La Central, which opened in 2019 and will eventually have five buildings. It previously leased a 50,000-square-foot YMCA.

Hudson Companies’ principal Aaron Koffman termed the signings are “a testament not only to the vibrant Melrose neighborhood but to The Bronx as a whole.”

Real estate outlook 2023: What buyers, sellers, and investors need to know
Republicans officially flip the U.S. House of Representatives
First Time Home Buyers Are SCREWED | Housing Affordability
Why does the US think it’s OK to try and RULE the WORLD?!? #shorts
Are Mandates coming back?!?! #shorts