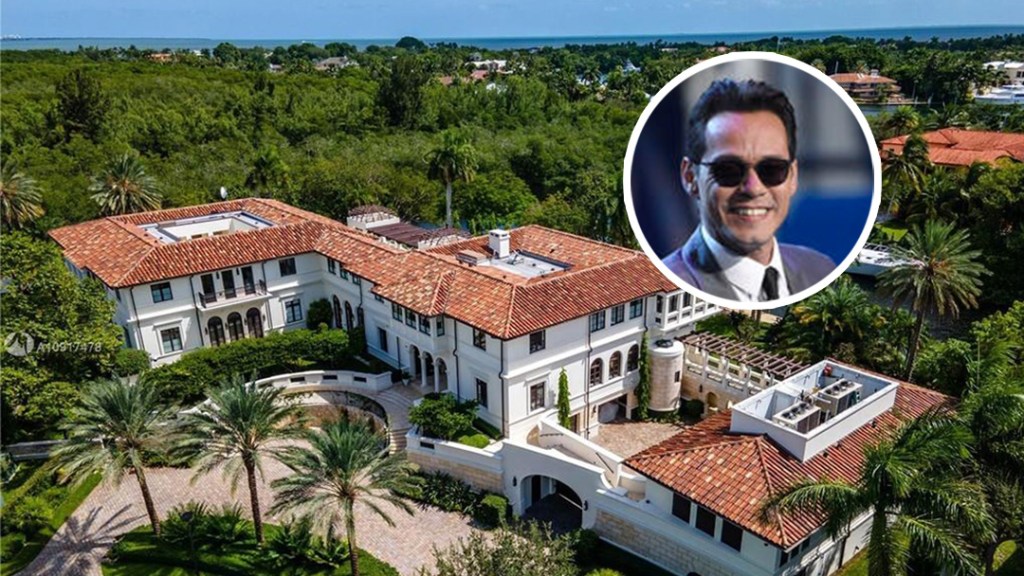 He needs to know … if he’ll get his asking price! Drinking in Latin superstar Marc Anthony’s opulent waterfront mansion in Coral Gables, Fla., is enough to make anyone intoxicated with awe and maybe even envy. The Italianate estate, known as Villa Costanera, is currently listed for $27 million, as was first reported by the L.A. Times. Spanning almost 17,000 square feet with a whopping 12 bedrooms and 14 bathrooms, the white stucco and terracotta-roofed villa comprises three principal buildings, two connected by a wide corridor lined with French doors, and a third separated from the other two by a cobblestone motor court.

Completed in 2016 and purchased by Anthony barely two years ago from Bacardi rum heiress Hilda Maria Bacardi for $19 million — far below its final asking price of $25 million — the lavish manse sprawls across 1.3 tropically landscaped and fastidiously groomed acres with 480-feet of direct water frontage replete with a private dock.

The two-time Grammy and six-time Latin Grammy winner’s $8 million markup is a bold move, especially considering he barely changed a thing. The massive living room remains awash in a soothing palette of creams, beiges and natural woods beneath a soaring coffered ceiling. Comfy, deep-cushioned sectional sofas, ultra-modern barrel chairs and a chic mirrored coffee table give the room a relaxed feel, while towering arched French doors facilitate an elegant transition to the gardens. Another smaller lounge with a carved stone fireplace is done up in the same, strictly neutral color scheme, while the colossal kitchen is a rather clunky and traditional affair with two large islands and deep-set arched windows lined with wood paneling more commonly found in libraries and fine haberdasheries.

The huge second-floor master suite incorporates a sitting room with fireplace, a bedroom with a balcony and a bathroom big enough to float a two-person jetted tube in the center of the marble-sheathed and chandelier enhanced space. Other notable features include a commercial-grade elevator, a wine cellar tucked down in the home’s vast catacombs and, above the semi-detached garage, separate living quarters for guests or staff.

Hazarding to guess the number of arches in and around the home might just land you in triple figures. There are more than a dozen, five of them in the form of a colonnade, around the snazzy zero-edge swimming pool and spa, the latter of which is accented with vibrant blue and yellow tiles. There’s also an outdoor kitchen and a great sweep of lawn sprinkled with swaying palm trees.

Anthony’s acquisition of Villa Costanera came on the heels of him swallowing a million-dollar loss on the sale of a sumptuous mansion in the Los Angeles neighborhood of Tarzana. And though he’s unsuccessfully attempted to unload it in years past, Anthony continues to own an estate on New York’s Long Island that he initially shared with with his first wife, former Miss Universe Dayanara Torres, before sharing it with second wife Jennifer Lopez, and eventually with model Shannon de Lima, his third ex-wife. He also maintains a compound at the Dominican Republic’s prestigious Casa de Campo resort that was once photographed for Architectural Digest.

Buying A $5,000 House: Cheap Houses For Sale 😱
Housing market ‘will be struggling for a little while longer,’ economist says
How Joel Made a Million Dollars with Freedom Mentor Phil Pustejovsky
How LLCs Can Protect You When Insurance Can’t | Real Estate Investing Strategies
We have sent. Over $100 BILLION by now? Do you buy that? #shorts