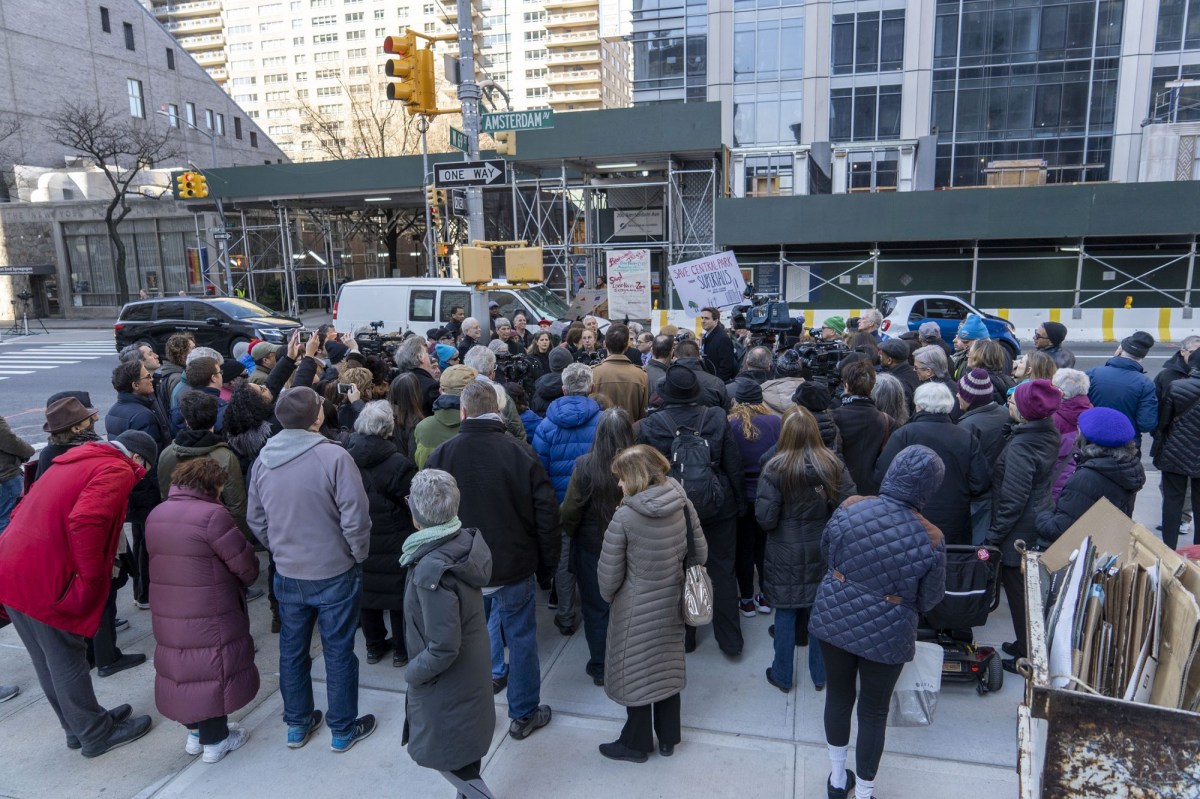 A day of destiny is at hand for 200 Amsterdam Ave., the nearly completed, 52-story condo tower at West 71st Street which a judge ordered to be half torn-down. City developers are on pins and needles, because if an appeals court doesn’t reverse the ruling, it could stymie other buildings under construction — and even impact some famous existing ones.

On Wednesday, a four-judge panel of the state Appellate Division will take up the case by developers SJP Properties, Mitsui Fusodan and the city’s Law Department seeking to overturn Judge Franc Perry’s February decision that 20 floors be taken down because the tower supposedly violated zoning rules.

The Municipal Art Society and Upper West Side activists had sued to chop down the project, accusing the developers of using “deceptive practices” and “violating city regulations.” But project proponents said that the court was improperly trying to retroactively reverse long-standing Department of Buildings rules.

The developers argued that they had valid permits for all 52 stories from the DOB and the Bureau of Standards and Appeals. City Hall joined in the appeal, saying the approvals were based on long-standing precedents. Some apartment-sale contracts were already signed but more were put on hold pending the legal outcome.

The approvals for the $700 million project (not including site-acquisition costs) were based on DOB interpretation of an arcane, 42-year-old zoning policy permitting “partial” and “whole” tax lots to be combined in order to create a larger footprint for new construction.

The DOB over decades approved dozens of other tax-lot “loopholes,” as critics call them — including for the MetLife (formerly Pan Am) tower on Park Avenue.

Perry said the city should yank 200 Amsterdam’s permits because the DOB nixed such tax-lot combinations in 2018. But the DOB and BSA gave the developers the green light a year prior to that. The agencies, moreover, said that forbidding such combinations was merely a proposal at the time and not yet signed into law.

A project spokesman said, “If a single judge can unilaterally cast aside expert agencies’ reading of a complex technical statute, it effectively renders city agencies powerless and creates uncertainty and risk for anyone trying to do business here.”

The team behind the massive Terminal Warehouse redevelopment in West Chelsea have tapped CBRE to nail down a $1.2 billion construction loan. Developers L&L Holding Co. and Columbia Property Trust (formerly Normandy Real Estate Partners) hope to close on a debt package by January.

Project plans were approved by the Landmarks Preservation Commission last January. Since then, the developers have refined the design, emptied 500,000 square feet of self-storage space that will be converted to offices, and begun soft demolition work. The project is slated for completion in 2023.

The 1.2 million square-foot, 1891-built mammoth spans the entire block bounded by 11th and 12th avenues and West 27th and 28th streets. It was once a key transfer hub for goods entering the city by rail and became home to the Tunnel disco nightclub.

The space is to be turned into a state-of-the art workplace with a sunlit, blocklong interior passageway for public use with stores and cafes. The design by COOKFOX architects incorporates many of the structure’s industrial-era elements, including timber from 500-year-old trees.

Curious doings are afoot at two of Sheldon Solow’s West 57th Street properties between Fifth and Sixth avenues, a block he increasingly dominates with his signature 9 West tower and new developments on both sides of the street.

At four-story 35 W. 57th, which he’s owned for decades, he’s booted two small kosher restaurants he wanted to evict over supposed insurance violations. The Great American Health Bar and Café Classico are gone and boarded up.

The site might be too small for a large new building. But it’s adjacent to a big empty lot — once home to the Rizzoli bookstore — owned by a Vornado-Lefrak joint venture. Now that No. 35 is vacant, Solow could easily sell it to the JV to create an even larger development site.

Or it could hint at a future Solow buyout of Vornado and Lefrak so he could put up another giant tower of his own. Far-fetched, but stranger things have happened.

Meanwhile, most of the artworks in the Solow Art & Architecture Foundation gallery at 9 West mysteriously disappeared over the past week.

Walls that displayed works by Jean-Michel Basquiat and Franz Kline, among others, are now bare and only a few paintings and an Alexander Calder mobile remain.

Coincidentally or not, the vanishing follows our Oct. 27 report on how Solow enjoys big tax breaks for the gallery even though it isn’t open to the public, as his IRS filings say it is.

The tax break will save him $33 million on the planned January sale at Sotheby’s of a Botticelli work expected to fetch more than $80 million.