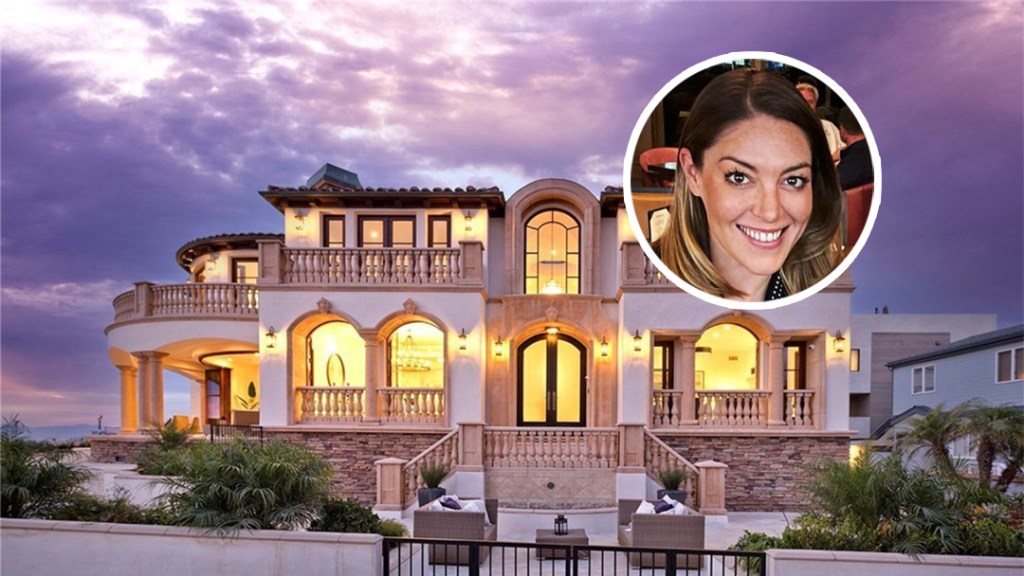 2020 has been a real estate whirlwind for Cindy Robinson, the wildly wealthy heiress to a Los Angeles-based helicopter empire. Over the summer, Robinson paid $14.5 million for a Malibu compound, and she’s selling multimillion-dollar homes in the Hollywood Hills and on Hawaii’s Big Island. And now, just in time for the holidays, the 33-year-old has listed her most lavish residence of all: a hulking mansion set on a double-wide Hermosa Beach oceanfront lot, which hit the market yesterday with a $22.9 million thud. That ask makes it the most expensive current listing in Hermosa Beach — and the second-priciest house for sale in L.A.’s entire South Bay.

Built new in 2002, the 7,500-square-foot house last sold in 2003 for $8.1 million to the late Barbara Robinson, Cindy’s mother and a noted cancer activist. In 2009, when she was just 22, records indicate Cindy inherited the property from her mother’s estate; since then, the place has been used occasionally, mostly as a part-time vacation home.

Though the exterior architecture has a distinctly early-2000s, Mediterranean-style bent, with columns and arches galore, the mansion’s interiors were completely renovated this year by Robinson and her husband Tim Mullen. Within the vast structure, rooms now flaunt a distinctly contemporary and sophisticated — if slightly generic — design, with wheat-colored hardwood floors, milky white walls, open-plan living spaces, and a minimalistic freedom from excessive frippery.

A double-height entryway topped by a skylight faces a delicately curved staircase and is flanked by formal living and dining rooms, the former with a fireplace and the latter opening — via sets of French doors — to an ultra-slender Juliet balcony.  The fireplace-equipped family room sports a curved bank of glassy doors that foldaway, offering panoramic views of the beach and access to a broad stone patio with space for large-scale entertaining.

Parties can be catered via the eat-in kitchen, and any chef will be impressed by the luxe gourmet amenities, which include quartzite countertops and top-of-the-line stainless appliances. Upstairs, the master bedroom has another fireplace and an oceanside balcony with unstoppable whitewater vistas. For its part, the spa-style master bath is replete with dual vanities, a built-in soaking tub, and a steam shower.

Other nifty features include a breakfast room with ocean views, a three-car attached garage, an office, multiple guest suites, a wine cellar, and a subterranean games room/lounge that includes a wet bar and fireplace. There’s also a soundproof movie theater swaddled in what appears to be royal blue tufted walls.

Of course, the property’s biggest selling point — and the reason for the nearly $23 million pricetag — is its sublime location on the Hermosa Beach Strand, with a sandy beach and blue sea spread before it. The .15-acre lot also has what is perhaps the city’s largest private oceanfront patio, complete with a BBQ grill and al fresco dining spaces.

For what its worth, the Robinson-Mullen mansion happens to sit right next door to a slightly smaller home — this one likely worth in the $10 million range — that was also owned by Robinson’s mother prior to her death. Records indicate that house is now owned by Robinson’s older brother Mark, though it appears he intends to remain in Hermosa Beach, at least for the moment.

Now in her early 30s, Robinson is a daughter of entrepreneur Frank Robinson, 90, who founded and nurtured Robinson Helicopter Company from a tiny upstart into a leading global manufacturer of civilian choppers, with $200 million in annual revenue and more than 1,300 employees. The Robinson R44, the company’s most famous model, has been the world’s best-selling civilian helicopter for over 20 years.

Besides her Hermosa Beach getaway and her new $14.5 million Malibu home, Robinson also owns a five-star cottage at Hawaii’s exclusive Kukio Golf and Beach Club, currently for sale with a $6.2 million pricetag. Her home in L.A.’s Hollywood Hills is also for sale, recently reduced to $5.75 million from its original $6.25 million ask.

Robinson also has clear ties to a fifth estate, this one a multimillion-dollar mansion in Lake Tahoe’s exclusive Martis Camp gated community, the resort enclave known for its popularity with Bay Area billionaires and assorted tech tycoons.