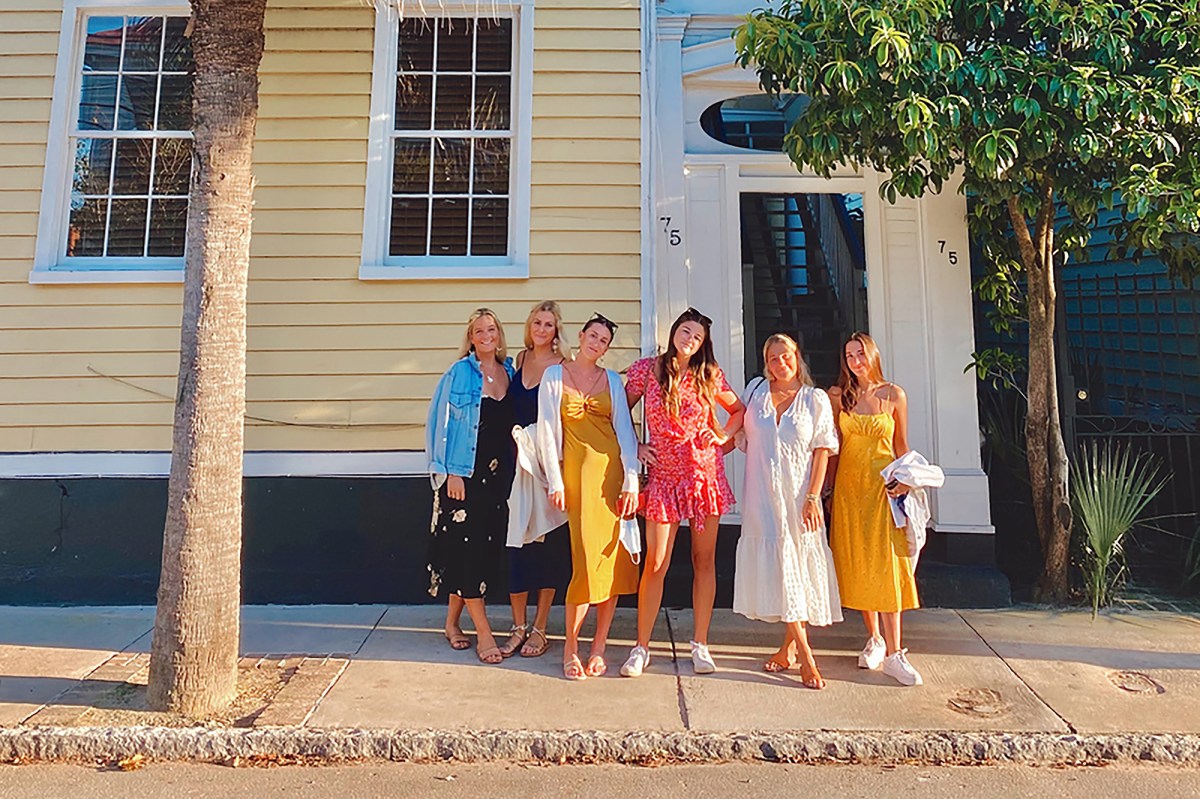 Ali Malecka was living her ideal post-college life in New York City. She had a dream job with a luxury travel company, an apartment in the East Village and plenty of friends who she spent her nights and weekends with frequenting buzzy restaurants and bars.

“I loved everything about New York,” said Malecka, 25, who is originally from Darien, Conn. “The people, the energy, the food. I couldn’t ever imagine leaving.”

Then COVID-19 hit and her perspective quickly changed.

After four months of lockdown, Malecka and her two college friends were itching for an escape. The trio decided to head to Charleston, SC, where they had attended the College of Charleston.

They moved into a three-bedroom apartment in downtown Charleston on the top floor of a 19th-century home and now have no plans to leave.

“Being here has been the most fabulous and relaxing experience,” said Malecka. “We’re able to work remotely and have tons of room to spread out. On weekends, we head to the beach.”

More importantly they’re saving cash. The $1,500-per-month rent Malecka paid in Manhattan got her just one-third the space she has today. Plus, her rent in Charleston is only $900.

Malecka isn’t alone. While many well-heeled New York residents retreated to Yankee strongholds like the Hamptons, Nantucket and South Florida, another surprisingly large group of city slickers are decamping to the American South.

These one-time loyal New Yorkers are moving to trendy mid-size cities like Charleston, SC, Nashville, Tenn., and Charlotte, NC, and scooping up seven-figure properties in luxury residential communities in countryside and beach locales designed to appeal to the northeastern market.

According to recent Redfin data, Nashville and Charlotte are among the top ten cities in the United States for home buyers looking to move to a different metro area — while New York is the top city in the country residents want to leave. Redfin’s lead economist, Taylor Marr, said that the New York area saw a migration of 47,000 people in the third quarter of this year, a jump from the 32,000 in the first quarter.

Tennessee and the Carolinas, in contrast, are leading the nation in population growth, said Marr.

These states are attractive, he said, because living costs are low, there’s no shortage of housing like there is in New York and the pace of life is laid-back. Plus, they’re picturesque with distinctive cultures and friendly locals. Politics also factors in.

“The country and especially New York is more polarized politically than it has been in a long time, and in talking to agents at our local offices, we’re finding that Republicans are leaving to go to more Republican areas while Democrats are moving to Democratic communities,” said Marr.

These are wealthy people in their 30s and 40s with no ties to the south who want a different lifestyle for their families. They have a new flexibility to work from anywhere and love the low property taxes, great weather and many attractions.

The evidence of New Yorkers saying “bye y’all” to the big city for a more easygoing life is everywhere in these local Southern markets.

Mary Lou Wertz, a co-founder of Maison Real Estate, which focuses on sales and rentals in downtown Charleston, said that her company has helped around ten New Yorkers move to the city since COVID-19, compared with a few last year.

“These are wealthy people in their 30s and 40s with no ties to the south who want a different lifestyle for their families,” she said.  “They have a new flexibility to work from anywhere and love the low property taxes, great weather and many attractions.”

In Charlotte, Lisa Archer, a broker with the real estate agency Live Love Homes, said that she has sold eight homes since April to people moving to town from New York. In a typical year, she sells two.

“I have a handful of retirees, but most of my buyers are in their 20s or 30s and are in shock and awe when they see how far their money will get them here,” she said.

The average price for a 1,500-square-foot house with a two-car garage in a desirable neighborhood is $250,000, according to Archer, but it’s possible to live in the lap of luxury for under seven figures.

As an example, she just sold a $800,000 sparkling new townhouse in an upscale development with a gym and pool to a Manhattan couple in their late 20s.

“Charlotte is a few hours from both the beach and the mountains and an incredibly safe, welcoming place to live, which my former New York residents say isn’t always the case there,” said Archer.

In Tennessee, Troubadour, a new, 860-acre luxury community from Discovery Land Company, has been a hot home buying spot for Manhattanites in the last few months. Owner Mike Meldman (who is also a co-founder of Casamigos Tequila), said that the community has seen an exodus of home buyers from the city who are looking for a safe haven.

Located just 30 minutes from Nashville, Troubadour has 369 homesites and a long list of amenities including a Tom Fazio-designed golf course, a waterpark with slides, an equestrian center and an outdoor amphitheater. Prices start at $2 million.

“There’s no income tax in Tennessee plus Nashville, which is so close, has an incredible country western and food scene,” said Meldman. “We’re seeing people from New York moving into Troubadour full-time, as opposed to using it as a vacation home, which is what home buyers often do in our communities.”

Also speaking to the popularity of remote settings, the Charlotte-based private equity real estate investment firm South Street Partners has seen a dramatic surge in home sales over the last few months in the luxury, amenity rich residential communities it owns in North and South Carolina.

The firm’s other entity, The Cliffs, a collection of seven mountain and lake club communities in the Carolina mountains, reported 48 closed sales this August, compared with 18 last August. The bulk of these buyers are also from New York, said Melton.

Daniel Donnelly, a Midtown East resident is currently building an 8,000-square-foot lakefront home with five bedrooms, a pool and infrared sauna at The Cliffs in Keowee Springs, SC (he will continue to live in Manhattan while the home is being constructed). He was drawn to the community, he said, for its golf course, hiking and biking trails, lake and open spaces.

“I love an active lifestyle, and The Cliffs gives me that in the most hypnotic setting you can imagine,” he said.

Donnelly, who is 62 and a consultant with a stake in several Manhattan restaurants — including the posh Italian eatery Avena — grew up in Flushing and raised his family in Garden City, Long Island; he also owns a home at Gurney’s in Montauk.

“I’m deeply entrenched in this city and know it will come back from the pandemic, but I need a retreat for my family, and The Cliffs is it,” he said. “Also, it might sound cheesy, but I’m an old-fashioned Catholic and I can’t get over the hospitality, family values and manners down there.”

But these New Yorkers haven’t totally given up their big city ways.

In Charleston, Malecka says she scouted out New York flavor and discovered the downtown tavern Little Jack’s — a dead ringer for her old haunt J.G. Melon on the Upper East Side.

“It has the same dark vibe and checkered tablecloths,” said Malecka. “And, dare I say it, the burgers are just as good. Almost.”

$70K Profit on Out of State House Flip! – Flipping Houses Long Distance – Numbers and Takeaways
I have the right to poop on the street. #shorts
Is @elonmusk trolling? #shorts
The American Dream vs Reality: Home Prices and Rents in America
How to Get Started In Real Estate Investing: What State is Best? #shorts #realestateinvesting