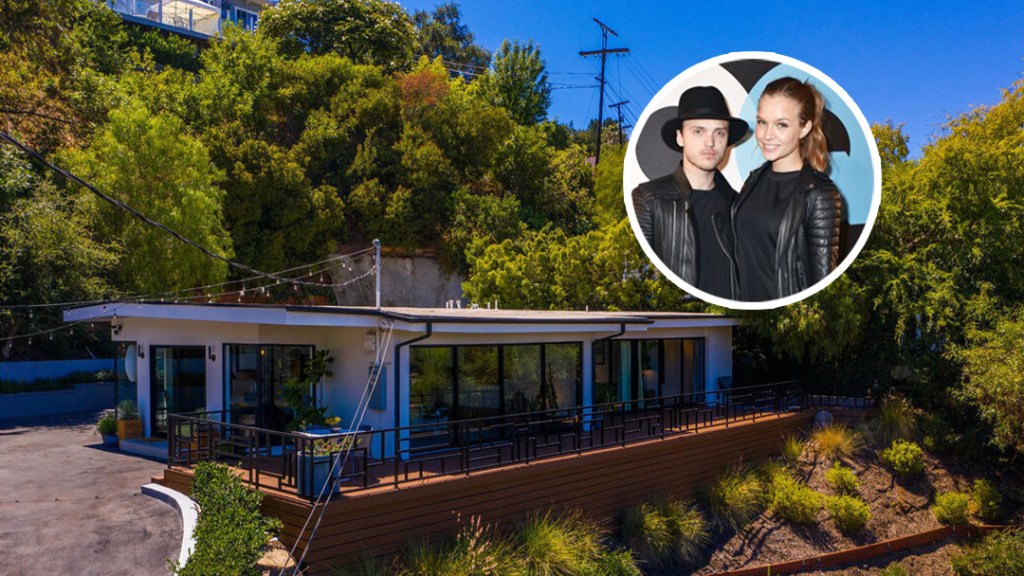 A supermodel and a rockstar. It’s the oldest cliché in the book, yet love still blossoms in this modern world. Luxury real estate is usually part of this arrangement’s equation, and for Victoria’s Secret angel Josephine Skriver and rocker Alexander DeLeon, who have just purchased a $2.35 million Hollywood Hills home, they are sticking faithfully to the formula.

The flat roofed, single-story post-and-beam midcentury modern home is only just over 1,600 square feet, but has undergone a sparkling renovation that’s transformed it into an ultra-modern playpen for the millennial lovebirds. The open plan layout features a canvas of polished concrete floors and sliding black framed glass doors on all sides, allowing the main room, which features a T.V. lounge, dining table and kitchen, to be flooded with natural light. The windows frame expansive views of the surrounding celeb-packed hills. White walls and exposed rafters encourage a free-flowing vibe which extends into the open-plan kitchen. Here, lacquered white cabinets, a herringbone back splash and seamless glassy black appliances offset with Carrara marble counters take the space from functional to fabulous.

Behind the kitchen is a third bedroom that’s currently used as an office/lounge, while the master bedroom is big enough to accommodate a California king bed, on either side of which are two hanging oversized reading lamps. A dressing area is hidden behind the boudoir’s back wall and an unimpeded view of the sprawling vista and foliage brings the outdoors inside. Sleek as any five-star luxury hotel, the master bath has a double sink marble vanity, a glass-enclosed walk-in shower and a soaking tub. The second bathroom features another walk-in shower and a marble-topped floating vanity.

There’s a small deck outside the living room and, surrounded by an evergreen faux-grass border and nestled up against a steep slope planted with a fun array of sculpted shrubbery, are a small rectangular swimming pool and a large spa that are ideal for post-pandemic pool parties.

Don’t necessarily expect the couple to hire movers, however. It appears that the property might just be an L.A. crash pad, as their main residence remains an ultra-contemporary home in Nashville that was featured in a 2018 issue of Architectural Digest.

DeLeon is best-known as the frontman for rock group The Cab, though he’s also released solo music under the name Bohnes. Like any music star worth his salt, the Las Vegas native also has sports own clothing company, 42799, which offers male and female lines — handy when your fiancé is a Danish supermodel. Skriver is more than eye candy, however, as she’s known for her outspoken advocacy of LGBTQIA rights. The 27-year-old first earned her Victoria Secret wings in 2016 and became Sports Illustrated’s coveted Rookie of The Year in July. Skriver recently revealed that she and DeLeon have postponed their wedding for a year due to Covid-19. “We have been together for so long we basically feel married already so waiting another year is turning out to be okay for us,” she told People.

BEWARE of Buying a Home Here (Investors & Builders Causing BIG Problems)
Real estate experts cautiously optimistic about 2023 housing market
Buyers are Liars and Seller are Too Timeless Real Estate Wisdom #shorts #realestate #freedommentor
Don’t Invest In A Condo, Invest In A House #realestateinvesting #realestate
I have the right to poop on the street. #shorts