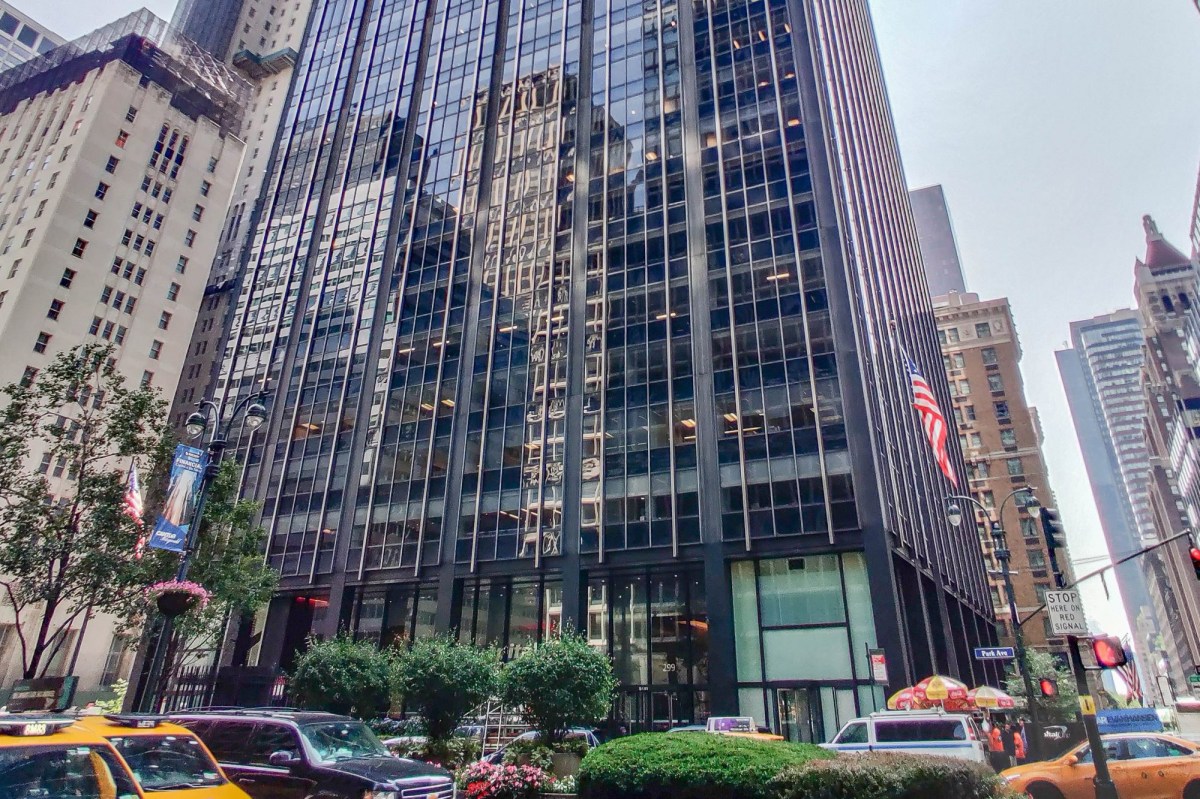 How cheap? Would you believe $25 per square foot on a prime stretch of Park Avenue?

That mind-boggling low rent is what high-profile public-relations firm 5W is paying at 299 Park Ave. under a sublease from MarketAxess Holdings, which moved to 55 Hudson Yards. The annual rent is $708,400 for the entire 10th floor, 28,336 square feet.

The 299 Park tower’s 1.2 million square feet are more than 90 percent leased at solid market rents, mostly to CapitalOne bank. The Post reported last week on the building’s capital-improvements program and Park Avenue’s overall strong metrics despite offices remaining mostly empty. We said that the subdistrict’s asking rents were more than $110 per square foot.

But the sublease market — which accounts for 23 percent of all availability in East Midtown — is a different story. And some Midtown tenants are unloading for peanuts the space they no longer need.

The balls all fell into the right holes at the right moment for power publicist Ronn Torossian’s 5W, which moved from a larger space at 230 Park Ave. nearby.

Its sublease at 299 Park Ave. is for a mere 18-month term that ends in February 2022. (The Post obtained a copy of the lease from independent sources — not from 5W, deal brokers at CBRE and Norman Bobrow & Co., MarketAxess or building owner Fisher Brothers.)

For Nasdaq-listed electronic-trading firm MarketAxess, which boasted revenues of more than $500 million last year, the lowball price it gave to 5W might be scarcely a rounding error — we couldn’t determine how much MarketAxess was paying on its Park Avenue lease.

Even so, it’s a sobering reminder of the sublease market’s struggles. Sublease asking rents in the Park Avenue area are as low as $30 psf.

Real-estate firm Keller Williams is said by brokerage sources to be paying less than $20 psf — a figure we couldn’t confirm — at 99 Park Ave., where the asking rent was reported by the Real Deal in July as $52 psf.

The avenue’s availability rate is a reasonably low 12 percent. Most direct-lease tenants are paying rents on time.

But the avenue’s “going to look like a shadow of itself until people start going back to their desks,” an executive of a longtime tenant said.

“There are only about 50 people going to work at 299 Park every day, which is the same at lots of buildings, and not just on Park Avenue.”

The muted financial-services leasing market still has a heartbeat. No, there are not any 300,000 square-foot expansions. But sometimes, even modest new leases can be meaningful for the type of tenant involved and the location.

The Empire State Building’s 2.7 million square feet, which are 94.2 percent rented, landed Stockholm-based Swedbank AB. Its lease for 7,905 square feet on the iconic tower’s 45th floor doesn’t sound like much, but it reflects the enduring confidence that many firms still have in the city — and in a future when office employees will be back at their desks.

The beloved skyscraper’s larger tenants include LinkedIn, Coty and Shutterstock. ESRT pumped hundreds of millions of dollars into the tower over the past 10 years to burnish its public spaces, restore neglected portions and to bring its formerly antiquated infrastructure up to 21st-century standards.

Downtown, Investors Bank — a subsidiary of Investors Bancorp — is taking more than 14,000 square feet at 111-115 Broadway. The Short Hills, NJ-based firm is consolidating its regional offices. CBRE’s Adam Foster and Mike Rizzo repped landlord Capital Properties along with their firm’s Brad Gerla and Adam Leshowitz. The asking rent was $59 psf.

The proposal to develop a Special Flushing Waterfront District sailed through the City Planning Commission last week by an 11-2 vote. Next stop is the City Council, which is to begin hearings on Monday. The council has 50 days to decide whether to approve the project.

As we reported two weeks ago, the Queens complex, to be developed by three companies, will have more than 1,700 apartments, as well as office space, retail stores and a public park on a currently vacant, 29-acre site on Flushing Creek.

I have the right to poop on the street. #shorts
BEWARE of Buying a Home Here (Investors & Builders Causing BIG Problems)
How To Start House Flipping As A Beginner (2023 Guide)
We have sent. Over $100 BILLION by now? Do you buy that? #shorts
How to Get Started In Real Estate Investing: What State is Best? #shorts #realestateinvesting