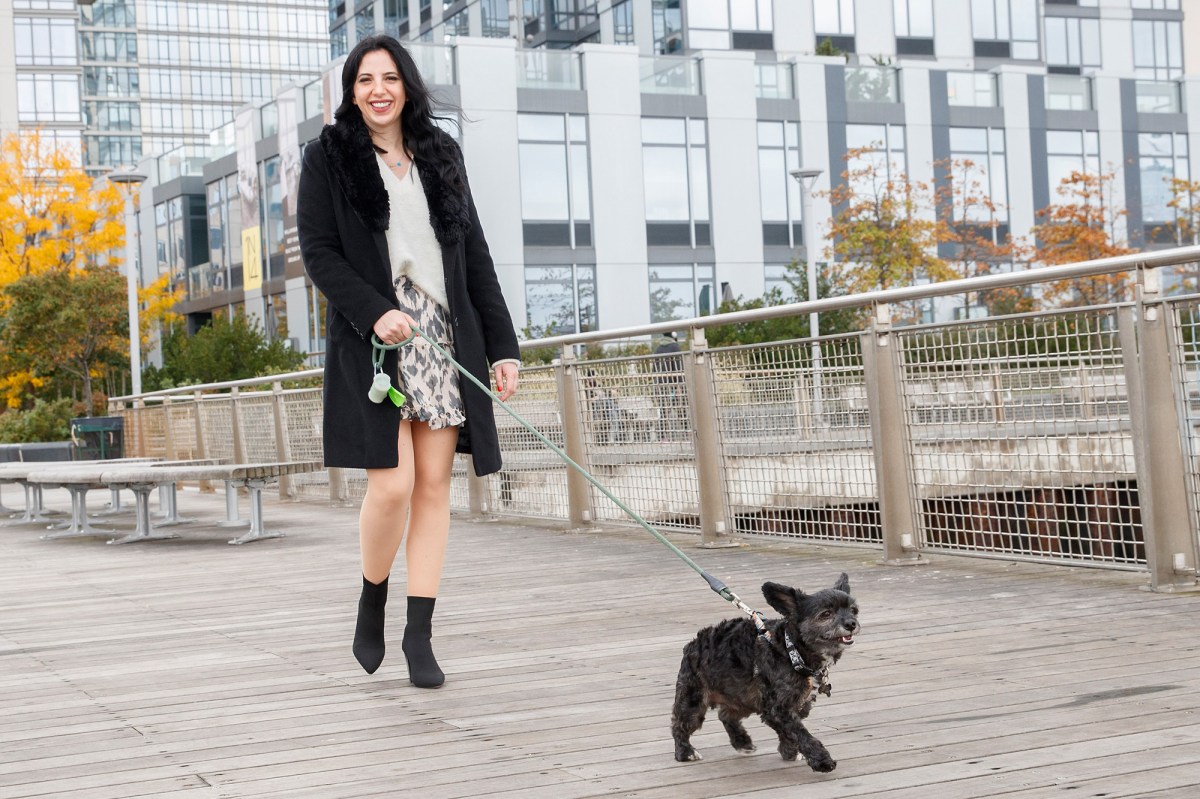 “Like everyone else I was in my apartment constantly,” she recalled. “I felt trapped, like I was just constantly within these four walls.”

Martinelli couldn’t cure the coronavirus, but she could change her surroundings.

At the end of September, she moved to a two-bedroom rental unit at Two Trees Management’s One South First on the Williamsburg waterfront — similar units are asking $4,367 a month.

Between East River vistas, access to Domino Park and building amenities like a roof deck and lounge pool, the new location has eased her mood.

“Even though you’re still trapped [at home], you don’t feel as trapped,” Martinelli said of her new abode.

Green space and expansive views are always in demand with New York apartment hunters, but the pandemic has pushed demand to new extremes and punished developments that lack a sense of the great outdoors.

According to StreetEasy, searches for both for sale and rental apartments with outdoor space in NYC is up 249 percent since before the pandemic started. And 38 percent of New Yorkers surveyed by the listing site in October said that outdoor space is now a bigger priority to them.

Joshua Young, a vice president at development firm The Douglaston Companies, added that renters have been flocking to the company’s Williamsburg waterfront buildings Level (where studio units start at $2,650) and One North Fourth (where studios start at $2,500). Meanwhile, at Douglaston’s West Chelsea rental building Ohm (studios from $2,000), the developer has seen “an exponential increase in vacancies,” with renewals and new lease signings coming in “dribs and drabs,” Young said. “It really is a tale of two cities right now.”

Mollie Beitch, 28, moved this month from Bushwick to a one-bedroom at One North Fourth. A tech worker, Beitch stopped|
going into the office once the pandemic hit.

“I was literally spending 24 hours a day in a studio apartment in Bushwick,” she said of her work-from-home experience.

When she decided to move, she knew better views and nearby greenspace would be high on her list of must-haves. That was especially the case given that many of the classic draws of city living — things like restaurants, museums and nightlife — are operating at somewhat limited capacity, with the possibility of a second wintertime lockdown looming.

“I think that people have sort of reframed how they are looking [for apartments], what their priorities are and are seeing parks and rec space as an extension of their home in the city,” said Vanessa Connelly, vice president of sales at Brown Harris Stevens Development Marketing.

For attorney Dennis Sughrue, 55, it wasn’t enough to be near a park — he wanted to be in it.

Sughrue moved in May from his Prospect Heights apartment to a two-bedroom at Landing A Associates’ 126-unit condo building Quay Tower (units from $1.7 million), which sits in Brooklyn Bridge Park.

While his old place was close to Prospect Park, he had to cross Eastern Parkway and Flatbush Avenue to get there, and that proved an obstacle, both physical and mental, that kept him from using and enjoying the park.

“I would always think long and hard about whether it was worth crossing Eastern Parkway and Flatbush Avenue to get to the park,” he said.

Now, the park is right outside his front door. That, plus the panoramic views from his 16th-floor unit, have made weathering the pandemic easier, Sughrue said.

“Even though I’m trapped at home, I don’t feel confined,” he said. “Particularly having the view of the harbor. It’s this ever-changing tableau and it makes the experience of working from home much less constricting.”

As a doctor, Minerva Romero Arenas, 37, doesn’t have the luxury of working from home, but she also wanted to make sure that when she was home, she didn’t feel like she was stuck there.

After looking at a number of sites in Brooklyn and Lower Manhattan, Arenas landed at Extell Development’s 815-unit Lower East Side condo building One Manhattan Square (units from $1.2 million), which abuts the East River and East River Greenway.

“I was really trying to prioritize not feeling trapped,” she said.
In addition to easy access to the riverfront, One Manhattan Square features a 1-acre private garden on site, which Christina Medina, director of sales at Extell and a building resident, said is a draw for buyers.

“The garden is definitely of interest to people, because we’re starting to see that people want a different quality of life but still with that New York City vibe,” she said.

I think the top priorities for people who are staying [through the pandemic] are open spaces, river views, and larger apartments. Basically, they are looking for a suburban lifestyle in New York City.

Spread across 2 waterfront acres, the complex sits along the East River Esplanade and features what it claims is the city’s largest roof garden.

“I think the top priorities for people who are staying [through the pandemic] are open spaces, river views, and larger apartments,” Davis said. “Basically, they are looking for a suburban lifestyle in New York City.”

It doesn’t get much more suburban in the city than the Parkway Village Coops in Kew Gardens. Built in 1946 as housing for employees of the United Nations, the 675-unit complex sits on 35 acres of parkland, which was a key part of its appeal for Alina Voitenk, 39, who moved in June from Crown Heights to a three-bedroom in the development (units from $320,000) with her husband Vitalii, 47, and their three children. The home they purchased was part of a package of 63 renovated units in the complex offered by real estate private equity firm Glacier Equities called The Village At Parkway.

She said they had enjoyed the more urban feel of their Brooklyn neighborhood, but that, “When the pandemic came, our lifestyle became very different from the way it was before.”

Parkway Village allows for easier social distancing than most New York neighborhoods, Voitenko noted, and being surrounded by park space makes it easy to stretch your legs — an important consideration given that all five members of her household are currently either working or studying from home.

“We are New Yorkers, we are city people, so we didn’t think about leaving the city,” she said. “For us, this is a choice that lets us stay in the city but not to be surrounded by so many people.”

What Drives You? (Discovering Your Real Estate Burning Why)
Flipping houses. South Side Chicago. Kitchen. NEGC Remodeling. Click subscribe to see our projects.
Housing: What to know before buying a home in 2023
Why does the US think it’s OK to try and RULE the WORLD?!? #shorts
Couple Flips House out of State for $Huge$ Profit! House Flipping Before Renovation Walkthrough