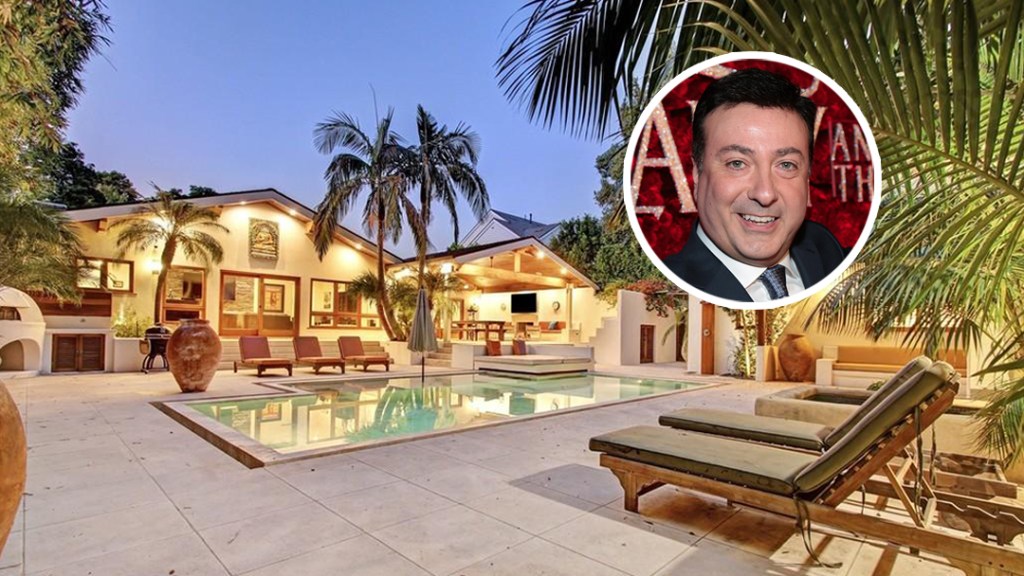 It seems that screenwriter Evan Spiliotopoulos, whose credits include “Beauty and the Beast” and “The Huntsman: Winter’s War,” has a case The Real Estate Fickle. It was only about a year ago he dropped nearly $4.1 million on a two-residence compound in one of the more coveted neighborhoods of L.A.’s popular Studio City community that he’s now got back up for sale at a bunny’s breath under $4.5 million. (It was originally listed over the summer at a slightly higher price of almost $4.6 million.)

Tucked into a leafy and coveted neighborhood, the two-residence compound has a rather illustrious former owner, “Baretta” star Robert Blake. The “In Cold Blood” actor owned the property from 1982 until it was sold in 2002 — several years before he was acquitted of the 2001 murder of his second wife, Bonnie Lee Bakley — for $840,00.

The just shy of one-third-acre parcel manages to comfortably accommodate two fully self-contained residences that, according to listings held by Jay Martinez and Gilbert Dirige of the JM Team at Compass, together span a mite more than 5,200 square feet. Unassuming from the street, the single-story 1930s ranch-style main house sits behind a decorative wood fence with three bedrooms and two and a half baths, while the two-story guest house, a vaguely neo-Mediterranean style villa, adds another four bedrooms and four bathrooms.

The front door of the main residence opens to an unusually long, bowling alley-like entrance gallery that leads to an airy great room that showcases a massive stacked stone fireplace and a 14-foot-high wood-beamed cathedral ceiling. At one end of the room, an open chef’s kitchen features walnut cabinets, marble-like quartz countertops and an array of gleaming designer stainless steel appliances. Two guest bedrooms, a shared luxury bath (with whimsical wallpaper that depicts dancing elephants!) and a spacious laundry room are clustered together, while the primary bedroom offers a fitted walk in closet, a small dressing area and a spa-style bathroom partly clad in tongue-and-groove wood paneling.

A tropically planted courtyard designed for relaxed outdoor living and entertaining separates the two homes. Just outside the main house, a cavernous covered patio with an outdoor fireplace spa steps down to a huge, sun-splashed terrace with a built-in grilling area complete with wood-fired pizza oven. A snazzy zero-edge saltwater swimming pool dominates the center of the courtyard and is complemented by a waterfall spa, an outdoor shower and a meditation pond.

In addition to its four bedrooms and baths, the spacious back house has a voluminous double-height great room replete with a rusticated stacked stone corner fireplace and a sleek high-end kitchen that uses the exact same deluxe materials as the kitchen in the main house. One of the main floor bedrooms has French doors to a semi-private deck, and an upstairs bedroom spills out to a balcony that overlooks the pool.

As it turns out, this isn’t the first time Spiliotopoulos has owned a home with a showbiz past. Earlier this year he took in close to $2.6 million on the sale of another Studio City home, a turreted Spanish Revival-style residence in the Colfax Meadows neighborhood that he bought in 2013 for about $2.12 million from “Walking Dead” star Jeffrey Dean Morgan.

Tax records show that Spiliotopoulos, who penned the script for “Snake Eyes: G.I. Joe Origins,” the upcoming Henry Golding-starrring prequel to the “G.I. Joe” film series, has already acquired his next San Fernando Valley  home, a brand-spanking-new “modern farmhouse” in on of Encino’s finest neighborhoods. The more-than-6,500-square-foot home has five-bedrooms, a state-of-the-art home theater and a guesthouse alongside the swimming pool in the lushly manicured and hedge privatized backyard.

2023 Real Estate Investing Strategies to Make Money
Ukraine Planned War With Russia To Join Nato
$70K Profit on Out of State House Flip! – Flipping Houses Long Distance – Numbers and Takeaways
Massive Changes are Happening in the US Housing Market
How Joel Made a Million Dollars with Freedom Mentor Phil Pustejovsky