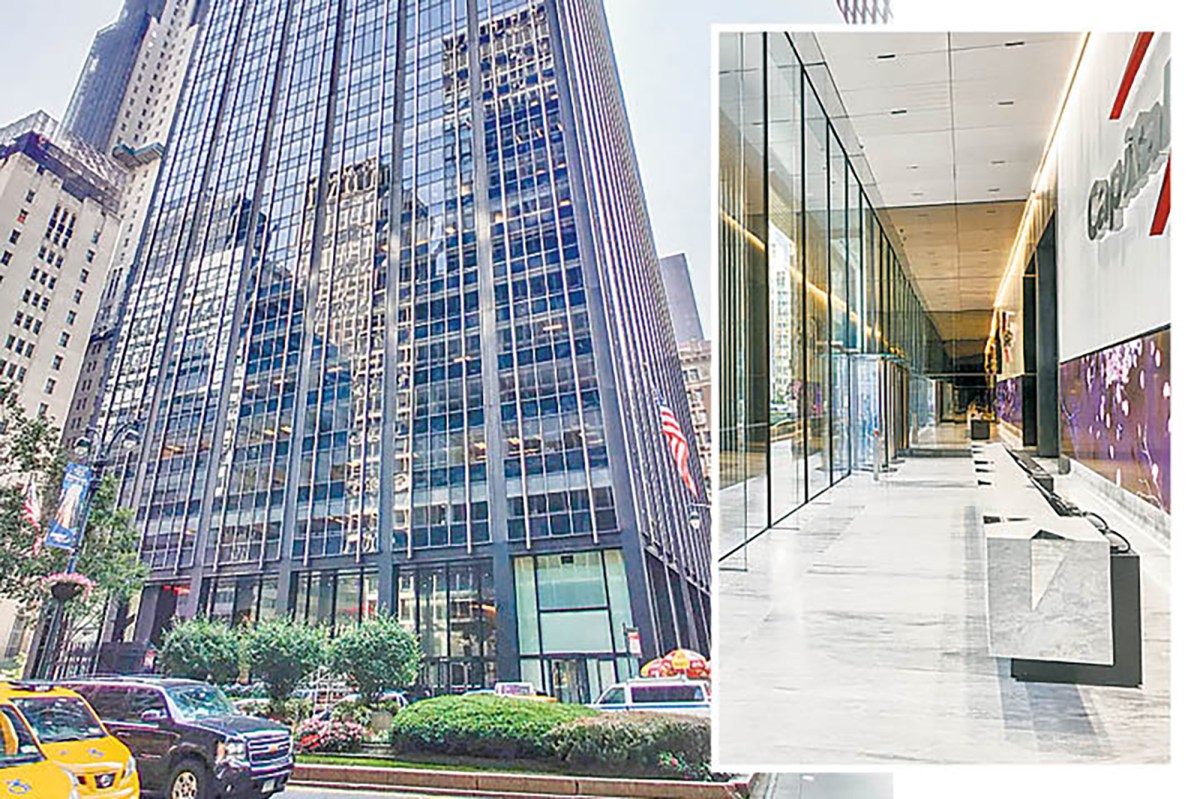 As part of a just-completed $20 million capital-upgrades program, 299 Park boasts a monumental digital art display in the lobby. The installation — done in partnership with Rockwell Group — hosted a week of safely spaced theatrical and dance acts for the public last week.

The digital display is a 60-foot-long LED art installation called “Living Canvas,” which Fisher says “brings the space to life with drama and dynamism.” Changes to the previously staid tower also include a new lobby exterior of black stone and a 26-foot-tall, 88-foot-long structural glazed curtain wall.

Landlord partner Ken Fisher called the new look “a significant milestone” using “one of the first dynamic art displays that uses advanced technology to create an immersive experience” and “to revitalize and electrify Midtown in a way that hasn’t been done before.”

He said the 1965 vintage tower’s recent upgrades have drawn “a substantial increase for in-person tours” by prospective tenants.

The tower’s 1.2 million square feet of office space are more than 90 percent leased, much of it to Capital One’s New York headquarters. Asking rents are “holding steady with Midtown Park Avenue trends,” a Fisher spokeswoman said. CBRE cites average asking rents on the avenue of $110.27.

Meanwhile, Park Avenue as a whole is holding up well after a rough patch that had some analysts questioning whether the corridor’s best days were over.

Park Avenue remains a crucial bellwether of the city’s fortunes thanks to its proximity to Grand Central Terminal, which in normal times disgorges tens of thousands of well-paid executives from Westchester and Connecticut.

At a time when office occupancy remains under 15 percent, Park Avenue can seem even quieter than other avenues because it has fewer street-level shops and eating places to generate sidewalk traffic.

But “the metrics are strong relative to the rest of the market,” said CBRE research manager Michael Slattery.

The avenue’s 900-ton gorilla is JPMorgan Chase’s ongoing project to replace its obsolescent 270 Park Ave. with a new skyscraper. The boulevard is also home to one of central Midtown’s few other large new office towers — L&L Holding Co.’s nearly completed 425 Park Ave., where Ken Griffin’s Citadel is taking half of the tower at rents ranging as high as $350 per square foot on the top floor.

CBRE says the 37-building Park Avenue submarket comprising 28.6 million square feet has 12 percent availability, a level the brokerage calls “equilibrium.” Sublease availability of 795,200 square feet represents about 23 percent of all availability — on par with the rest of Midtown.

“For a time, the momentum seemed to be sending tenants out of the corridor. It wasn’t a vote against Park Avenue, but about finding the newest and best space” elsewhere, LaRusso said.

One major loss was Wells Fargo, which left the Seagram Building at 375 Park Ave. for Hudson Yards.

But Park Avenue landlords, aware of the threat, began spending a fortune a few years ago to contemporize their properties, including at Vornado and SL Green’s 280 Park (which had a whole new facade installed on lower floors) and at the Stahl Organization’s 277 Park Ave., where a $100 million capital improvements program is underway.

One indication of that was Raymond James’ spirits-lifting lease at Mutual of America’s 320 Park Ave. for 160,000 square feet in July, as first reported in The Post.

But what the avenue really needs to feel like its old self is a reopened Waldorf-Astoria Hotel, where a complete redesign was behind schedule even before the pandemic struck.

Owner Dajia US recently auctioned off 80,000 old Waldorf items prior to interior demolition. Completion of the hotel in shrunken form and 375 condo units is still at least two years off.