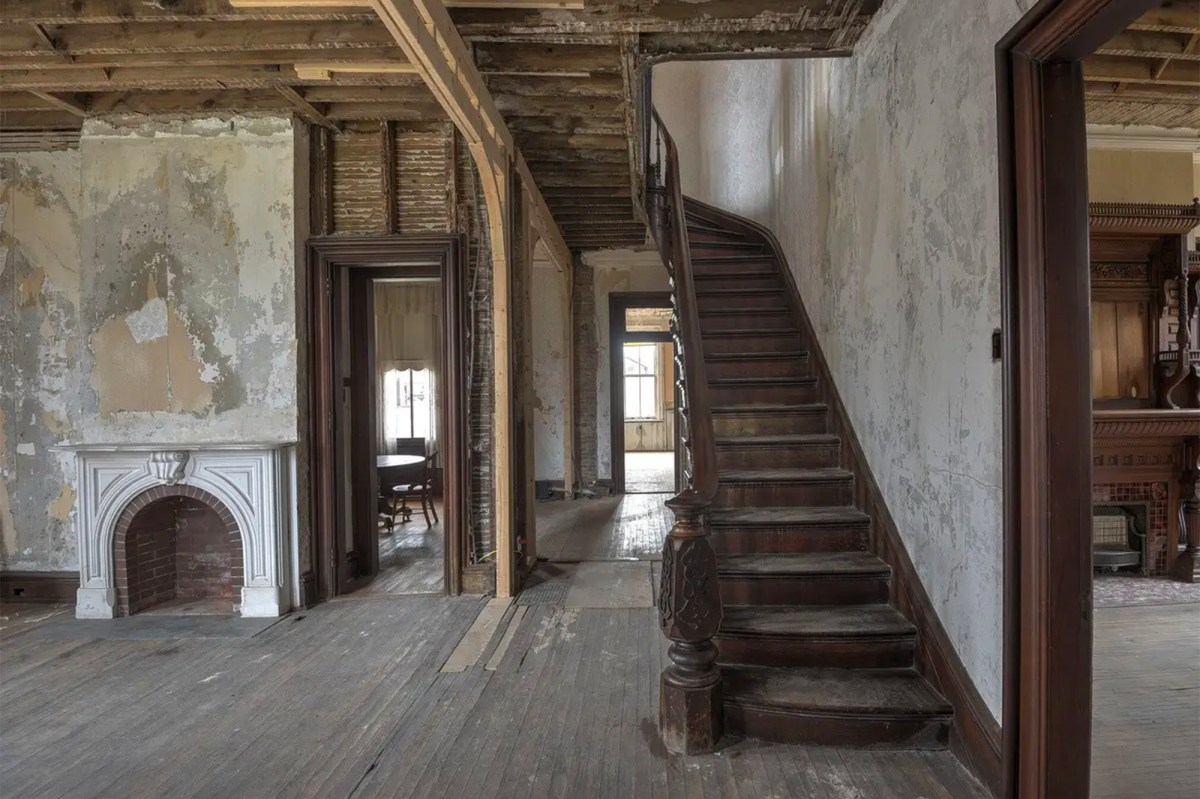 At the stroke of midnight on Halloween, the gavel will fall on a haunted castle in upstate New York. The starting bid: just $25,000.

That sounds like a steal for an approximately 7,000-square-foot mansion in the Finger Lakes that features three stories (including an extremely spooky basement), four fireplaces, a separate carriage house, a turret, stained glass and so many bedrooms the listing simply advises aspiring nobility to “see floor plan.” But also included? Ghosts.

“There’s activity there, 100 percent,” paranormal investigator and founder of the ghost-hunter group Soul Searchers Shawn DiBello told The Post, pointing to ample audio and video evidence of supernatural occurrences. “We got everything from noises to figures on our SLS kinetic camera — a camera that can see what the human eye can’t see.”

In 1871, stockholders of an Auburn, NY, mill spent $7,000 to build the castle in a style reminiscent of a Scotch manor for mill manager and Scotsman Samuel Laurie. But Laurie’s wife, Jeanie “Jane” McAllister, would tragically die in the building. In August 1890, she succumbed to a prolonged case of “the grippe,” an archaic term for influenza. Her funeral was held in the castle. Some say that her spirit never left. The couple had 10 children and only one son survived.

Three years later, the Panic of 1893 decimated Laurie’s mill interests, and he was forced to sell the property. Soon after, his health began failing, and within two years, he had died of Bright’s disease.

“We asked, ‘Do you remember the cars?’ and a child responded, ‘Lots of cars,’ ” said DiBello. “There’s something intelligent there — you don’t always get stuff like that.”

Owner Patrick Connelly has enjoyed being a local celebrity ever since he bought the castle at 45 Owasco St. five years ago. But he has finally decided to put the fixer-upper on the market with broker Michael DeRosa. Bids are accepted online and from anywhere in the world up until “just before midnight” on Oct. 31, DeRosa said.

“Whether I’m at the diner or the pub, it’s always the same thing: ‘This is the guy who owns the castle!’ ” said 55-year-old Connelly, who told The Post he pretty much knows how the conversation will go.

“The first thing they ask, ‘Is it haunted?’ ” said Connelly, who always answers in the affirmative. “I thought the spirits were friendly to me. I don’t think they have harm in mind — they just want to let us know they’re there.”

A few months ago, while he was up in the attic with a small group taking pictures, a poof of dust appeared out of an old wicker baby carriage.

“We all stepped back and asked each other, ‘Did you see that?’ ” recalled Connelly, who noted a few especially spooky spots around the property. The carriage house, which Connelly said is older than the castle itself, revealed a “charged spot” in the basement that’s a constant trigger.

“The hair on my neck stands up, and I get freaked out. I feel cold whenever I’m down there,” he said. “It’s creepy.”

Another time, a friend was over with his back toward the closet and blithely said, “Well, I don’t believe in ghosts” when the door suddenly popped open and hit him on the head. “Then he changed his tune, ‘I do believe!’ ” recalled Connelly.

Ukraine Planned War With Russia To Join Nato
WHY Flipping Houses Never Made Me Wealthy…
What are the trends in the 2023 housing market?
Is @elonmusk trolling? #shorts
Skyrocketing Prices Cause Businesses To Close In The West