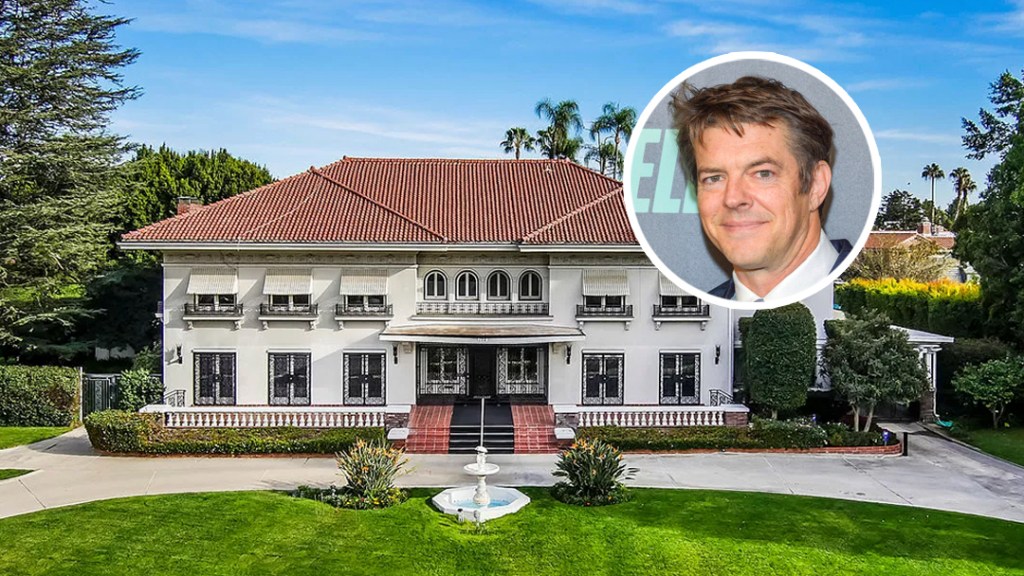 One of the first mansions built in the historic and prestigious if somewhat unheralded (and arguably under-rated) Fremont Place enclave, due south of L.A.’s fancy-pants Hancock Park neighborhood, has been sold by powerhouse film and television producer Jason Blum and writer Lauren Schuker Blum in a clandestine off-market deal valued at $11.4 million. The sale price is an enviable chunk above the $9.44 million the trophy property collecting pair paid for the stately spread not quite two-and-a-half years ago.

Known as a prolific producer of profoundly profitable micro-budget horror film franchises, “The Purge,” Paranormal Activity” and “Happy Death Day” among them, Blum first won an Emmy as an executive producer on the TV movie “The Normal Heart” (2014), based on Larry Kramer’s groundbreaking 1985 play of the same name. He took home another Emmy the following year for HBO’s documentary series “The Jinx.” Blum’s many feature film credits include “Whiplash,” “Get Out” and “BlacKkKlansman, all of which were nominated for an Oscar in the Best Picture category, and his slate of nearly two dozen upcoming projects being powered forward by his Blumhouse Productions includes the final installments of the “Halloween” franchise and “Vengeance,” B.J. Novak’s directorial debut starring Issa Rae and Ashton Kutcher.

Completed in 1915, Blum’s now former Mediterranean Revival-style villa was originally built as the winter home of Illinois real estate developer Charles Henry Thompson and his wife Clara. The Thompsons leased the property to filmmaker, author and composer Rupert Hughes, uncle of Howard Hughes, before they sold it in 1922 to oilman King G. Gillette, silver-spooned son of disposable razor tycoon King C. Gillette. Gillette remained in residence only a handful of years before he sold it to the Archdiocese of Los Angeles. A chapel with richly colored stained glass windows (and godawful gold carpeting) was soon added to the by-any-standard palatial home that for several decades served as the residence of Cardinal James Francis McIntyre.

One of the largest of the 70-some parcels in the guard-gated Mid-City neighborhood, the 1.25-acre spread was acquired in 1970 by L.A. socialite Patricia “Patte” Barham, daughter of physician turned newspaperman Frank Barham, long-time publisher of William Randolph Hearst’s Los Angeles Herald. Barham remained in residence until her 2016 death, at 99 years old, when the property passed to her surviving husband, Jim Inman, who soon sold it to the Blums.

Since the property was not on the open market, it’s not clear what, if any, improvements were made over the last couple of years. At the time of the Blums’ purchase, the genteel home was certainly in need of some restoration and extensive updating, though listing photographs from the time show the more-than-9,300-square-foot mansion retained a fair amount of extraordinary original detailing such as gleaming hardwood floors, exquisite Honduran mahogany woodwork and wrought iron screens that enhance privacy and floridly embellish main floor windows that face the street. In a classic layout that facilitates elegant entertaining, the wide and nearly 35-foot-long entrance hall is flanked by a ballroom-sized living room and a 450-square-foot formal dining room with delicate stenciling on the wood-beamed ceiling.

Elsewhere, a curiously (and unfortunately) window-less library is lined with glass-fronted bookcases, while a sun porch as long as a bowling alley sports a fireplace and a series of picture windows that look out on the backyard and swimming pool. A warren of rooms behind the dining room, the mansion’s extensive service quarters encompass a giant butler’s pantry, a spacious kitchen and a laundry room. Nearby staff quarters comprise two bedrooms and a shared bathroom. Accessible by front and rear staircases, as well as an elevator, the half dozen second-floor bedrooms include a three-room main suite that sprawls across a wing of its own with two fireplaces, several walk-in closets and, of course, a spacious bathroom.

There’s also a basement with wine cellar, a small attic space and a one-bedroom/one-bath apartment for staff or guests atop a detached four-car garage. The grounds showcase broad sweeps of lawn and formal gardens that incorporate a pavilion alongside the swimming pool.

Other notable residents of Fremont Place include Mary Pickford, Mohammed Ali, married actors Angela Bassett and Courtney Vance, who sold up a dozen years ago for $3.8 million, and Bridget Fonda and Danny Elfman, who have both of their homes in the swanky ‘hood for sale, one at $5.8 million and the other at $8.8 million.

The under-the-radar transaction was handled for the Blums by Eric Lavey at Sotheby’s Int’l Realty; The buyers were repped by June Ahn of Coldwell Banker Realty.

The architecture savvy Blums are by no means strangers to the property gossip columns and, indeed, preside over an impressive portfolio worth at least $30 million. They previously (and very briefly) owned an Italian Renaissance Revival-style manse in Hancock Park that they bought in late 2017 for almost $6.1 million and, after initiating extensive renovations, sold for the exact same price early the next year in an off-market deal to acclaimed landscape architect Jay Griffith. They continue to own an almost 4,300-square-foot penthouse at the ultra-luxe Ritz-Carlton Residences in downtown Los Angeles that they picked up in 2016 for $6.7 million from Hollywood power couple Mary Hart and Burt Sugarman. And, earlier this year they splashed out $14.3 million for a fanciful Frank Gehry-designed (and Mark Mack overhauled) compound in idyllic Santa Monica Canyon and then, just about a month later, dumped another $9.8 million on a turn-of-the-century townhouse along a plum street in New York City’s historic Brooklyn Heights neighborhood with a light-filled, ultra-modern interior re-worked by Michael Ingui of Baxt Ingui Architects.