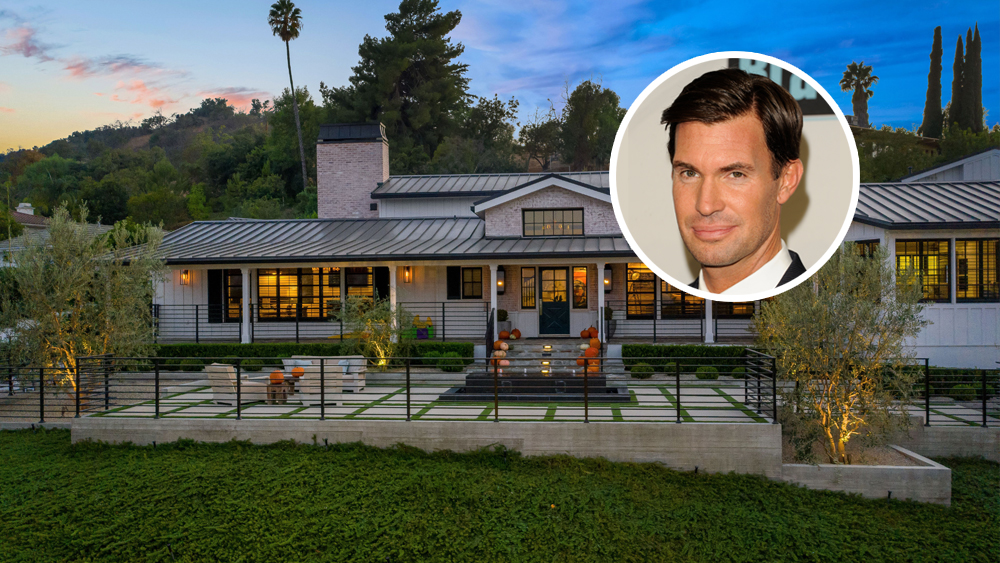 House flipping Bravolebrity Jeff Lewis is up to his old tricks again — the “Flipping Out” star has put another house up for sale, this one a large, sprawling compound in L.A.’s celeb-favored San Fernando Valley enclave of Sherman Oaks. But this time, the serial entrepreneur and radio show host’s latest flip isn’t really a flip. Lewis purchased the property in late 2015 for exactly $2 million and — before their very public split and bitter custody dispute — lived and worked there with Gage Edwards, his now ex-partner. The property and its many upgrades and alterations was, of course, featured on “Flipping Out.”

Prominently perched atop a small grassy knoll on a baseball diamond-shaped .58-acre lot, the roomy residence measures in at a little over 4,000 square feet with four bedrooms and four and a half bathrooms. Originally built in the 1940s, the painstakingly overhauled multi-level ranch-style home has all the quintessential Jeff Lewis signatures — a neutral color palette, high0end finishes, eye-catching light fixtures, and clean-lined furnishings that give it an upscale, transitional modern aesthetic. Wheat-colored wide-plank hardwood floors, pure white walls, lots of built ins, and vaulted and beamed tongue-and-groove ceilings can be found throughout the residence.

The foyer contains a geometric-patterned grey-and-white marble floor, and a staircase lined with a tweed runner curves up to the second floor. It’s two steps up from the foyer to the formal sitting room, where despite a dark, navy-blue rug, the ambiance is light and airy. Artwork is showcased with brass gallery lamps, while sunlight streams in through a series of double-hung windows covered by plantation shutters.

As per the listing, the chef’s style kitchen is filled with “every appliance and amenity that one would desire” and illuminated via a series of casement window and a large skylight cut into the room’s vaulted and beamed ceiling. Enviably large and arranged around an oversized, marble-topped island, the deluxe eat-in kitchen features breakfast bar seating, ample counter space and commercial-style designer appliances. The space is shared with a casual and cozy dining area built into a bay window with banquette seating.

Upstairs, the elegant master suite boasts a private balcony and a stately, black marble fireplace. The master bedroom has been painted a delicate shade of peach, which almost matches the honey-colored hardwood flooring. Steps from the bedroom lead up to a spacious walk-in closet more reminiscent of a high-end haberdashery and than an ordinary closet, while the master bathroom offers spa-like ambiance with a free-standing soaking tub, a two-person walk-in shower and and an elegant basketweave-pattern marble tile floor.

The property’s hilly yard is equipped with all the bells and whistles expected of a suburban home at this price point. In addition to plenty of grassy lawn, there’s also a fire pit, a fully equipped outdoor kitchen under an open air cabana, and a swimming pool and spa. But if that’s not quite enough, there are permits and plans available for a future owner to build an additional structure on the lot.

The listing is held by Josh Altman and Matt Altman of The Altman Brothers at Douglas Elliman.

What are the trends in the 2023 housing market?
How to Get Started In Real Estate Investing: What State is Best? #shorts #realestateinvesting
How Joel Made a Million Dollars with Freedom Mentor Phil Pustejovsky
I have the right to poop on the street. #shorts
Buyers are Liars and Seller are Too Timeless Real Estate Wisdom #shorts #realestate #freedommentor