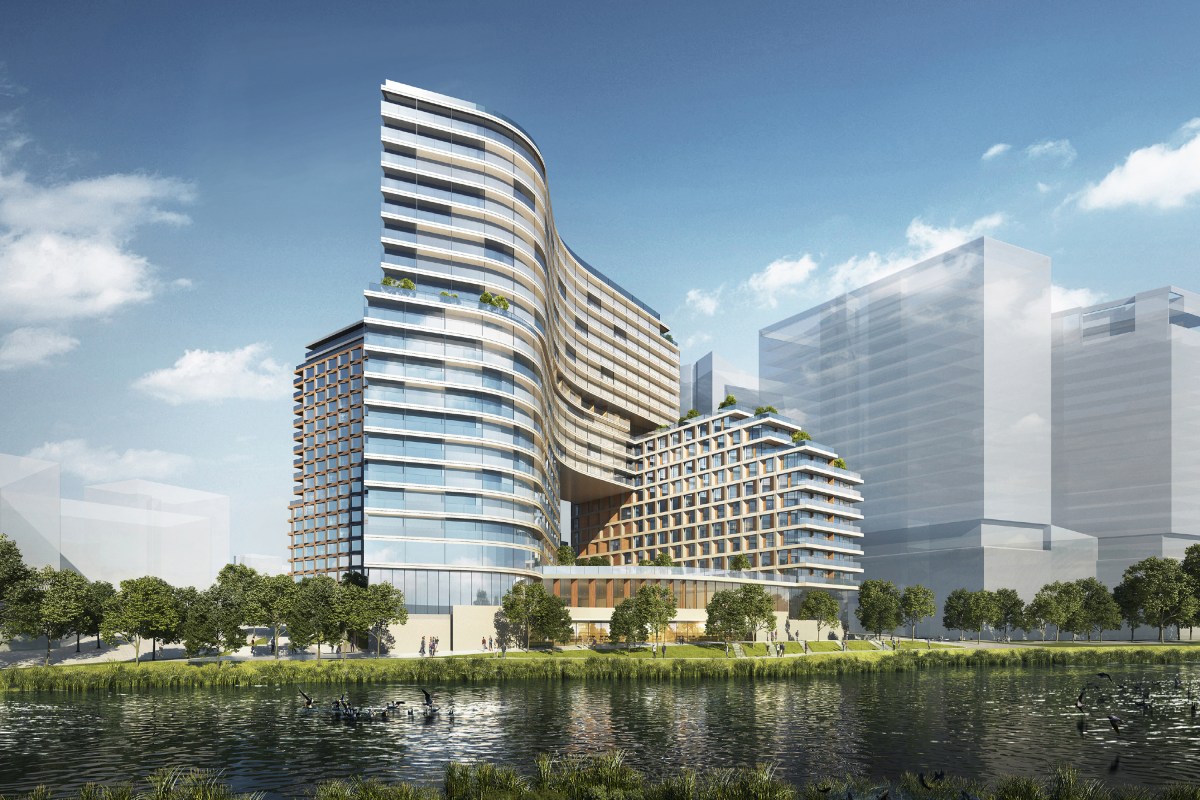 Downtown Flushing is one of the city’s most dynamic commercial districts, bustling even during the pandemic and rumbling with new construction.

But one thing it doesn’t have is a useable waterfront, even though its hotels, restaurants and malls are just a few minutes’ walk from Flushing Creek.

It would smooth the way for large-scale development on what’s now a mostly wasted landscape of bare ground and a few unidentifiable ruins, cut off from the rest of Flushing by iron fences.

The eyesore is interrupted only by a large U-Haul garage, which would remain at the site.

The question is: Can the proposal fly at a time when anti-development activists have stymied rezonings to allow new buildings in neighborhoods like Inwood and at specific sites such as Industry City in Brooklyn’s Sunset Park?

The Flushing developers aim to build a nine-building complex on the irregularly-shaped site bounded by Flushing Creek on the west, 40th Road on the south, 36th Avenue on the north and College Point Boulevard on the east.

There would also be a 160,000 square-foot, public waterfront park with Manhattan skyline views, as well as new streets to link the complex to the wider Flushing neighborhood.

It would be built without public subsidies. The developers would also provide environmental remediation including a cleanup of contaminated Flushing Creek. They say the project will generate $28 million in annual tax revenue for the city and create more than 2,900 permanent jobs.

The developers teamed up to persuade the city to create the district, but they are not partners. They own four separate parcels of land and each would build its own projects in accordance with the special district’s design guidelines.

But together they will make the complex more cohesive under the master plan by Hill West Architects than would result from piecemeal construction. Moreover, each developed segment would enhance the value of the others.

The proposal, now wending its way through the city’s Uniform Land Use Review Procedure, would require rezoning a relatively small portion of the site at its north end and modifying the existing zoning in the rest.

The plan was overwhelmingly approved by the local community board. It will next be voted on by the City Planning Commission in early November before moving to the City Council.

Young Nian Group Vice President Steven Breiman said the idea to revitalize the under-utilized Flushing waterfront has been around for 25 years. But several proposals went nowhere.

Except at the site’s northermost segment, which is now zoned only for industrial use, most of the new buildings could theoretically be built as-of-right, Breiman said.

But for various technical reasons, including height limits due to proximity to LaGuardia Airport, each element would still need certain city approvals that would make the job take up to two years longer than could be done under streamlined, special-district framework.

In a project with a roughly $2 billion total construction cost, “Time is of the essence,” Breiman said.

In typical New York fashion, the waterfront plan is getting flak from local activists who claim it will drive up apartment and business rents nearby and drive out working-class Flushing residents.

But fears of “gentrification” overlook that downtown Flushing, despite looking shabby in spots, is flush with capital and boasts many wealthy residents. Apartments at Sky View Parc, which is right across the street from the waterfront land, are asking well over $2 million for sale and renting for nearly $6,000 a month.

The City Planning Commission is expected to green-light the proposal, but its real test lies ahead in the City Council.

Recent other development initiatives died in that body due to resistance by council members who represented the projects’ districts. However, the council member for Flushing, Peter Koo, hardly seems hostile.

He told The Post in a statement: “The Special Flushing Waterfront District has many merits that would provide our community with tangible benefits we wouldn’t have under an as-of-right scenario.

“We’re working with stakeholders in hopes of making this project the best it can be for Flushing.”