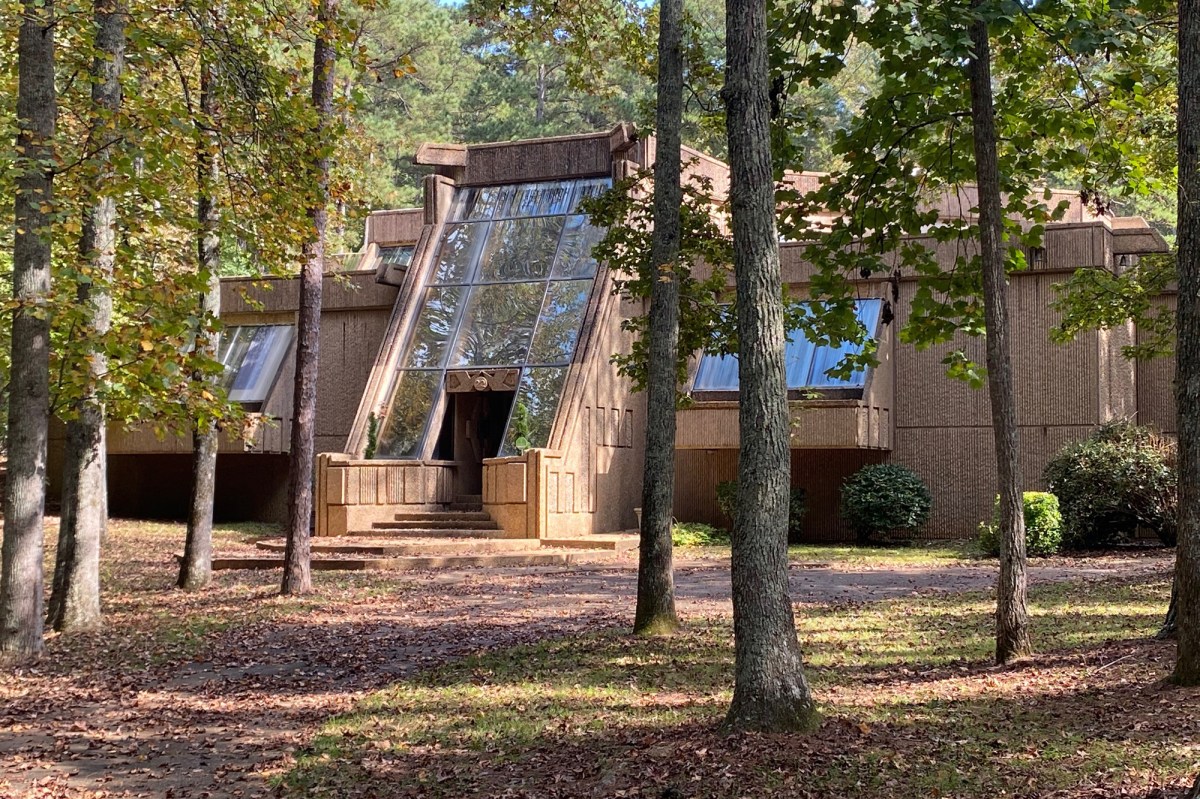 Home is where the hard is.

The buyers of a Brutalist-style concrete home that went viral in 2018 are finally sharing their story — and no, they’re not the villains of a comic book, as their menacing lair might suggest.

The severe-looking glass and concrete home in Georgia is owned by Chris Donio and his wife Riki Le Cotey, who create specialty and superhero costumes for TV and film, including some Marvel productions. The couple plunked down $325,000 for the home, which was built in 1975 in the blocky style of 1950s-era New Brutalism.

Fate brought the funky 3,771-square-foot residence in Newnan, Ga., into their lives — kind of. Donio first laid eyes on a photo of it while working on the movie “Ant-Man and the Wasp,” which featured exterior shots of the quirky abode. The interior was built on a sound stage. He couldn’t wait to tell Le Cotey, who is also a well-known cosplay model.

“My wife was working on ‘Avengers’ [both movies were filmed at Pinewood Studios in Atlanta] and I said, ‘You have to go to Stage 15 and see this house they built. It’s totally my style.’ ”

Though she never made it to set, not too long after, she was looking at real-estate listing site Zillow and saw the real thing.

The next day, they drove out to look at the property, and it was Le Cotey’s turn to fall in love. The pair snatched it, and as a nod to “Ant-Man and the Wasp,” they named it “Quantum” — a running joke in the Paul Rudd flick.

On an Instagram account they created for the home, @79quantum, they call it a “villain’s lair” — a nod to its foreboding former life on the movie set.

The home’s material has less fantastical origins. In the mid ’70s, a local concrete magnate named Johnny Estep commissioned architect Michael Corcoran to build a home with leftover concrete scraps made for parking decks. The result was the imposing structure, which also features a pool snaking through the space and giant windows tilted toward the sky.

“Friends we have brought over say it’s like being in a mall,” he said. “The malls we really liked in the ’70s when they had water features and sunken pits.”

Sadly, the home is not currently habitable. It needs a new roof, electrical system, plumbing and heating. It also had some critter issues, including a few resident scorpions.

The pair have taken pains to ensure they maintain the house’s integrity. They have developed a relationship with the original architect, who has been helpful as they move forward with renovations. But it took longer to find a contractor who understood its unique elements.

“The walls are 4-inch-thick concrete,” said Donio. “I had to drill a hole for the power line and it took me four hours of drilling.”

A local plumber Donio hired to turn on the water saw potential for other types of drilling in the space.

While he isn’t about to turn Quantum over to the skin industry, he speculates that it wasn’t erected in puritanism, given its sexy style and the fact that its original owner was a bachelor.

“I am not unaware of the aesthetic of the house and the time frame in which parties of that nature were taking place,” he said. “But the house is going to get a good scrubbing.”

Once it’s up to snuff, the couple plans to create an interior green wall. “The more plant life we have will help clean the air. It’s Brutalist architecture but we would like to work in as much nature as possible.”

And then there’s the pool.

“We are both in the costume department and we are always lugging something, so it will be nice to go in the whirlpool and soak. I have a bad back, so the thought of stretching out my back in the pool is great. I cannot wait.”

How LLCs Can Protect You When Insurance Can’t | Real Estate Investing Strategies
What Drives You? (Discovering Your Real Estate Burning Why)
STOP BUYING HOMES: The Housing Market is a Total SCAM
How To Start House Flipping As A Beginner (2023 Guide)
Massive Changes are Happening in the US Housing Market