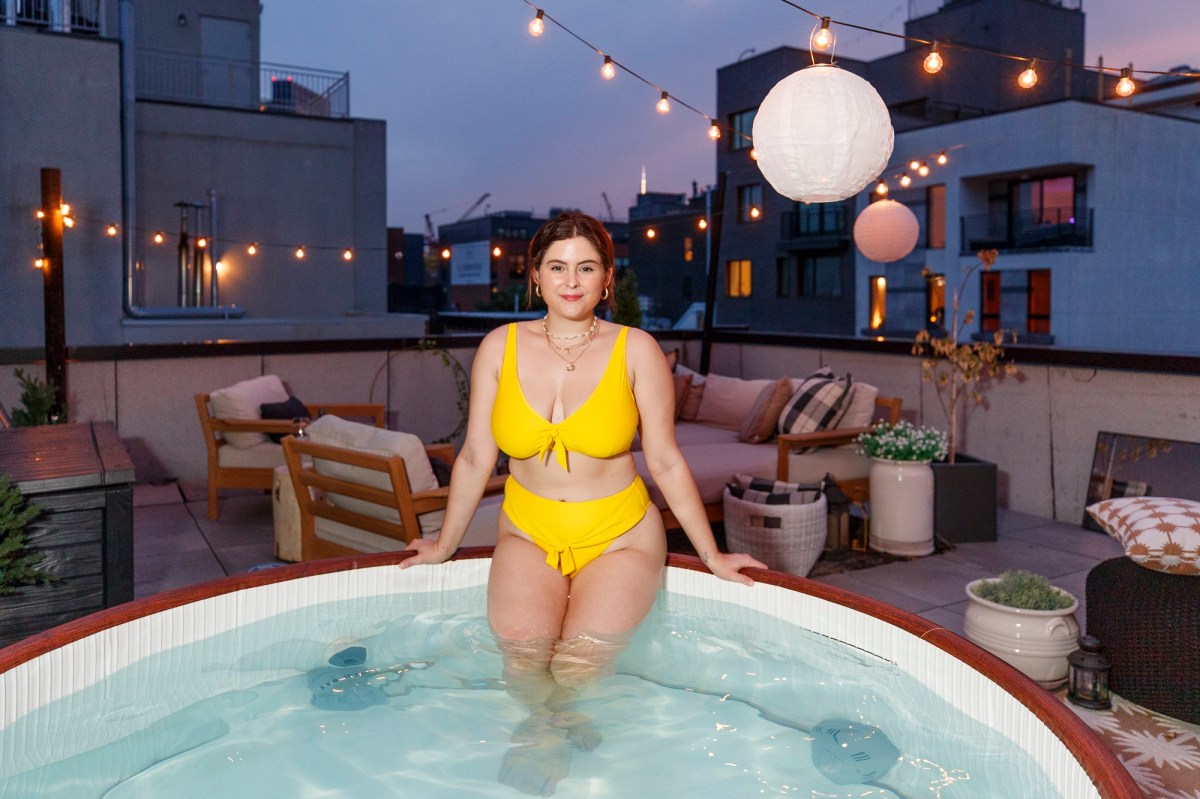 A version of this story ran in the New York Post print editions on July 16.

For Catherine Ebel and her family, theme park season passes are an annual tradition.

But in early May, as the mother of five realized that summer 2020 was going to be far from typical due to the coronavirus pandemic, she knew she needed a back-up plan. So she started searching for a swimming pool for the backyard of their Somerset County, New Jersey, home that would appease her children, who range in age from 5 to 19.

“We’re home with lots of kids and nowhere to go,” said Ebel, 38. “So we thought this could be our theme park.”

But across the country, other housebound sods had the same idea, and pools — blow-up, kiddie, hard-sided, pop-up — quickly sold out. Ebel started making multiple trips a week to retailers across central New Jersey and finally found one that had been returned to Walmart. The 18-foot-wide, 4½-foot-deep Intex metal frame pool would keep her brood cool — and sane — through the hottest months.

The craze even has New Yorkers with precious outdoor space jumping through hoops to nab a coveted pool: Brooklyn blogger Noelle Downing purchased a hot tub in March, a week before the state’s stay-at-home order took effect.

Mary Fields and her husband Pax experienced a similar scramble when kitting out their Catskills retreat, where they decamped when the pandemic hit. The Astoria, Queens, couple and their daughter spend the season there, by a private lake in the Sullivan County hamlet of Smallwood, NY, but it was unclear if the lake would even be open for swimming.

They floated the idea of a pool in April, but by the time they decided to take the plunge, they were gone. “One day, I drove 185 miles around three counties visiting every single Target, Lowe’s, Walmart, pool supply store,” said Fields, 41. “Nobody had any.”

Online, she found insane price hikes, with some sellers charging $1,000 for a pool that would typically cost around half that. Then, just before Memorial Day weekend, the Fields found a kit on eBay that included a 15-foot Intex pool, a ladder, a skimmer and a pump for $700 — shipping included. “As we were deciding whether or not we should buy it, the number of people looking at just kept going up,” recalls Fields. “So we did it.”

After a delivery mishap because the truck driver couldn’t get down their tiny, winding road, the couple finally brought the pool home. It took three adults an hour to build, and 24 hours to fill. “We’ve used it every day since we put it up,” said Fields, adding that Lux, their 5-year-old daughter, never wants to get out. “This child will be in there until she turns blue.”

The Fields plan to put the pool up again next year, even if there’s not a health crisis keeping them from the lake. But they’ll need to level the ground first. “Our yard isn’t as flat as we thought it was,” said Fields. “The pool has a bit of a dip and a lean.”

Similarly, leveling the ground for installation was the hardest part of the process for Ebel. She and her husband, along with a couple friends, did the work themselves over two weeks. “It was a way bigger project than we would have ever taken on in such a short period of time,” she said, noting that while they had considered a pool before COVID-19 hit, it was not something they had planned on doing during this time until they realized ongoing closures and social distancing requirements would be in place for the duration of summer. “We needed this,” added Ebel.

Now, a month after bringing the pool home, the backyard is completely transformed. Ebel and her husband added a gazebo on each side, bamboo fencing for privacy, river rocks for decoration and string lights for night-time swimming. “It’s our little oasis,” she said. “It gives the kids an outlet. It gives us a place to relax.”

The Truglio family can relate. The pandemic brought both Truglio children — Justin, 24, a health care consultant, and Danielle, 25, a brand marketing coordinator at NBC — from the city back to their parents’ place in Nassau County, and they all needed space to work and unwind. “This house doesn’t really accommodate four adults,” said their mom, Danna. On top of that, the family is forgoing their usual Westhampton rental due to the coronavirus, so they wanted to turn their home into an escape. They focused on the backyard, which already had a patio, a koi pond and a swinging bench.

Since March, they’ve added a hot tub and a large sectional sofa with a coffee table, as well as ornamental seagrass and ocean rocks for a beachy vibe. “It’s our vacation home,” said Danna, 61. Added dad Mario, 65, “We wanted our kids to be comfortable and give them options for places to work.” (Both parents work as geriatric care managers.)

Justin takes full advantage of the hot tub — “I use it more than anyone by a long shot,” he said — while both kids often have friends over for socially distant hangs outside. “It creates some level of normalcy during this crazy time,” Danielle added.

For Gizelle Ferrer, more downtime during quarantine meant time to perfect her backyard in Ridgewood, Queens, where she installed a stock tank soaking pool last summer. This year, with beach trips out of the question, she and her fireman husband Frank Villanueva, 42, are spending more time in their 6-by-2½-foot metal tub, so they gave it an upgrade, installing a filter and a pump. They also ringed the top with colorful noodles and decorated the outside with beer can labels from local breweries.

“Before summer even started, we spent a lot of time in the backyard,” said Ferrer, a 41-year-old graphic designer. “We eat out there, and we’ll soak between working. My husband is an essential worker, so he’s on 24-hour shifts. When he comes home and it’s hot, he can just relax in the pool.”

In Greenpoint, Downing, the blogger, has created a dreamy oasis on her 940-square-foot deck. She had a blow-up hot tub, but the pump froze and broke in the fall. A week before lockdown hit, she nabbed a $477 Helinski SaluSpa on Amazon. (It’s much pricier now.) She also had the foresight to buy two beach loungers at the same time. “The timing was lucky,” said Downing, 28. A fringed umbrella, new plants, a hammock and layered rugs complete the beachy boho escape.

“I’m definitely using my outdoor space more,” Downing added. “It fills that vibe of wanting to go to a restaurant or bar. Instead, I’m just doing that on my terrace.”

Buyers are Liars and Seller are Too Timeless Real Estate Wisdom #shorts #realestate #freedommentor
How To Start House Flipping As A Beginner (2023 Guide)
Flipping Houses and Landlord Business on the Rise
What Drives You? (Discovering Your Real Estate Burning Why)
Buying A $5,000 House: Cheap Houses For Sale 😱