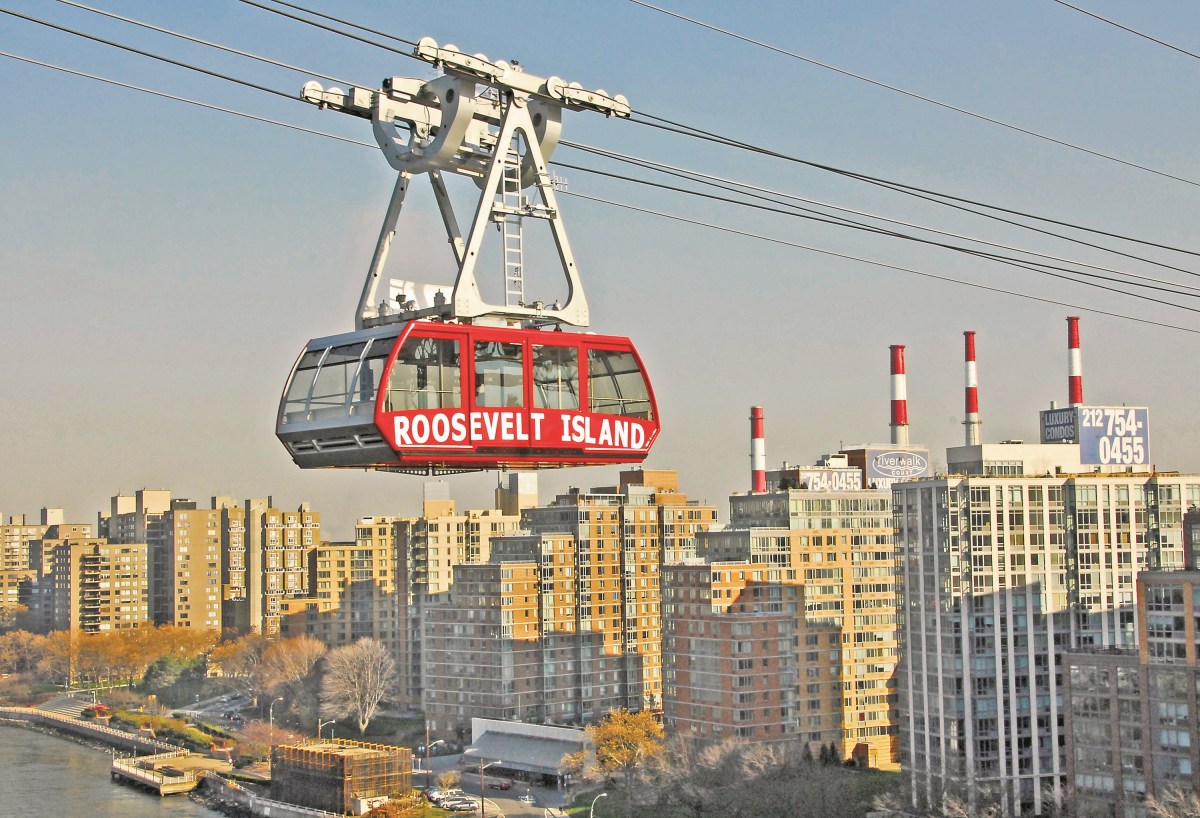 “Forget everything you think you know about Roosevelt Island,” said Kaja Meade, who moved her family from Manhattan to the spit of land in the East River in 2012.

The slender, two-mile long expanse tucked between the Upper East Side and Astoria, Queens, is a somewhat obscure neighborhood whose appeal — and sheer existence — leaves some New Yorkers baffled.

“It’s a perplexing notion,” said Meade, a 44-year-old Corcoran broker, of the reactions she gets when she tells people she lives on Roosevelt Island. “There’s always disbelief or abject curiosity. Some people have been here once or never at all.”

Technically a part of Manhattan but also isolated from it thanks to geography, it’s where prisons, hospitals and a lunatic asylum were relegated during the 19th and early 20th centuries. Roosevelt Island only developed into a residential community in the 1970s after Mayor John Lindsay sought to revitalize the area with housing.

Today, the 147-acre island has an estimated 14,000 residents (the 2010 census counted 11,661, but the number has grown). And the vision outlined in an original master plan is finally nearing completion via a joint venture between two real-estate developers: Hudson Companies and Related. The latest phase of growth encompasses nine buildings built since 1997 with about 2,000 residential rental and condo units, 40 percent of which are designated affordable. Eight buildings are done, with the final building yet to break ground. The firms have also added ground-floor retail along Main Street, bringing more dining and shopping options to the somewhat underserved island, like the recently opened Granny Annie’s Bar & Kitchen.

Meade has long enjoyed the small-town vibes of the island, which has views of the skyline and ample recreation options, including parks, swimming pools and tennis courts, all encircled by a riverfront promenade. “You can go outside anytime of day and see people you know,” said Meade, who lives with her husband Dan, a 44-year-old banker, and their two sons, age 6 and 9. “A lot of your life is lived outdoors.”
Since the onset of the coronavirus pandemic, some renters and buyers with shifting priorities are seeing Roosevelt Island with fresh eyes.

Its once-derided isolation is now a major perk. Fewer crowds, amenity-laden luxury buildings with affordable rents and wide open parkland have made its relative inaccessibility and unsavory history less of a hurdle.

When Alyssa Fernandez, 27, and her boyfriend, Iron Copelev, 37, decided to part ways with their roommate in an East Harlem walkup and find a place of their own, Roosevelt Island was not on the radar. The couple initially looked at buildings in the Financial District and Battery Park City before a friend who lives on the island tipped them off to its COVID-era benefits.

“We were apprehensive at first,” Fernandez said. But after visiting Manhattan Park, a rental development spanning four buildings and 880 units on the northern stretch of the island, they decided on a one-bedroom there with views of the East River. “It had everything we wanted without dealing with issues of high density,” said Fernandez. And at 600 square feet, it was about twice the size of anything they’d seen downtown in their $2,700/month price range.

The newly renovated building, with prices ranging from one-bedrooms starting at $2,300 to three-bedrooms from $3,900, also boasts a swimming pool whose 8,500-square-foot deck is transformed every summer with colorful murals by different artists. Manhattan Park also has a rooftop sundeck with barbecues, as well as landscaped grounds where outdoor yoga classes are offered in the summertime. The building is currently offering two months free on a 14-month lease.

As far as her new life, Fernandez said, “We’ve expanded our hobbies and use our time differently.” She enjoys simply reading a book on a bench by the river, pitching a hammock at one of the parks or hosting a socially distant barbecue with friends, while Copelev’s taken to exploring the island by bicycle. “We’re not going out as much as we used to,” she added. “We’re experiencing New York in different ways.”

For divorcé Victor Garcia, 53, privacy and safety made Roosevelt Island an attractive place to raise his 13-year-old daughter Kiara.

Leaving the Upper East Side behind, Garcia moved into a 680-square-foot one-bedroom at Manhattan Park in August. He found the $3,850/month unit with skyline views with the help of agent Monica Luque of Douglas Elliman. “It’s the perfect place. You’re in New York City, but not in the middle of the crowds,” said Garcia who enjoys morning runs around the island with his golden border collie puppy, Gia.

The relative seclusion doesn’t faze him either. The owner of a high-end art and antiques delivery company, Garcia can easily access his Long Island City warehouse via a short bridge to Queens — the island’s only vehicular access point — in just 10 minutes by motorcycle.

Transit has historically been a bugaboo for the island: The Ed Koch Queensboro Bridge, which stretches from Midtown East to Long Island City, runs above it, but there’s no way to enter or exit. The bright-red Roosevelt Island Tramway from 59th Street and Second Avenue in Manhattan is its most visible access point, but the island is also serviced by the F train as well as NYC Ferry’s Astoria route, which runs from the Upper East Side to Wall Street’s Pier 11 with stops in Queens and Brooklyn. The Q102 bus and a locally operated shuttle are other options, but commuting has become a little less pressing since COVID-19 pushed many industries to operate remotely.

“I love playing with the different methods of transportation,” said Fernandez, who’s visited Ellis Island and the Statue of Liberty by ferry this summer. And Copelev’s commute time was cut in half with their move —it’s just 15 minutes on the F train to the Lower East Side where he bartends. Meanwhile, Fernandez, who works from home developing beauty tutorials for social media, now has a spacious living room to set up studio lighting.

Don’t forget the student scene: In 2017, Cornell Tech entered the fray, adding a 12-acre campus on the southern end of the island offering masters and PhD programs in technology, business, law and design. A 26-story, 353-unit tower with student and faculty housing that rises next to the Queensboro Bridge, The House at Cornell Tech, also developed by Hudson and Related, is considered the world’s largest “passive house.”

When the Meades moved to the island, they initially leased a three-bedroom apartment in the swanky Riverwalk Crossing in Southtown, a new sub-neighborhood dreamed up by Hudson and Related. Then, in 2014, they upgraded to a $1.3 million duplex co-op with a terrace at Rivercross in Northtown, which they gut-renovated to create a four-bedroom, 3½-bath apartment spanning 1,800 square feet.

It’s kind of like surburbia dropped in the middle of New York City.

Rivercross is one of the island’s four original 1970s buildings. The Brutalist-style, cinder-block structures were designated as affordable rentals and co-ops for middle-income families through the city’s Mitchell-Lama program, established in 1955.

While most of the buildings have since been converted into market-rate apartments, a few original Mitchell-Lama tenants remain, like Judy Berdy, president of the Roosevelt Island Historical Society, who was one of its first residents when she moved there in 1977 as a twentysomething.

After living in two rentals, Berdy purchased her 650-square-foot Rivercross studio co-op in 2005 for $26,500 after 13 years on a Mitchell-Lama wait list. Now, if she decides to sell, she will owe a 45 percent flip tax to the now-privatized building. “If you’ve been here for a long time, it’s affordable,” Berdy quipped. “If you’re new, not so much.”

A newcomer as of August, Paul Krikler, 59, scored a three-bedroom, 2½-bath co-op at Island House, another one of the enclave’s original buildings. He now has more space — and a massive kitchen — for half the price of his former digs on the Upper East Side. Island House, where listings start at $474,000 for a studio and $1.15 million for a three-bedroom, has a gym and a pool. Its tranquility comes as a welcome surprise for Krikler, a native of London who works in finance.

“I love Manhattan’s hustle and bustle vibe, but it’s also nice to just sit back and watch the world go by on a park bench,” he said. “That sounds like suburbia, but it’s kind of like suburbia dropped in the middle of New York City.”

Limited inventory and pricing outliers make it difficult to track trends in Roosevelt Island’s property market. But in 2020, the median sales price was $1.17 million and the median asking rent was $3,340, according to data from brokerage Brown Harris Stevens. Since the onset of the pandemic, the share of rentals that received a discount actually dropped from 54.4 percent in February to 36.4 percent in August, according to StreetEasy. That downward shift could indicate an increase in demand that lets landlords lease units at their original (higher) prices instead of lowering them to lure renters — as is the norm these days across the rest of the COVID-stricken city.

The island remains a retreat.

“The city has changed a lot since the pandemic,” said Garcia, who appreciates the island’s under-the-radar appeal. “Most people don’t know Roosevelt Island, which is good for me.”