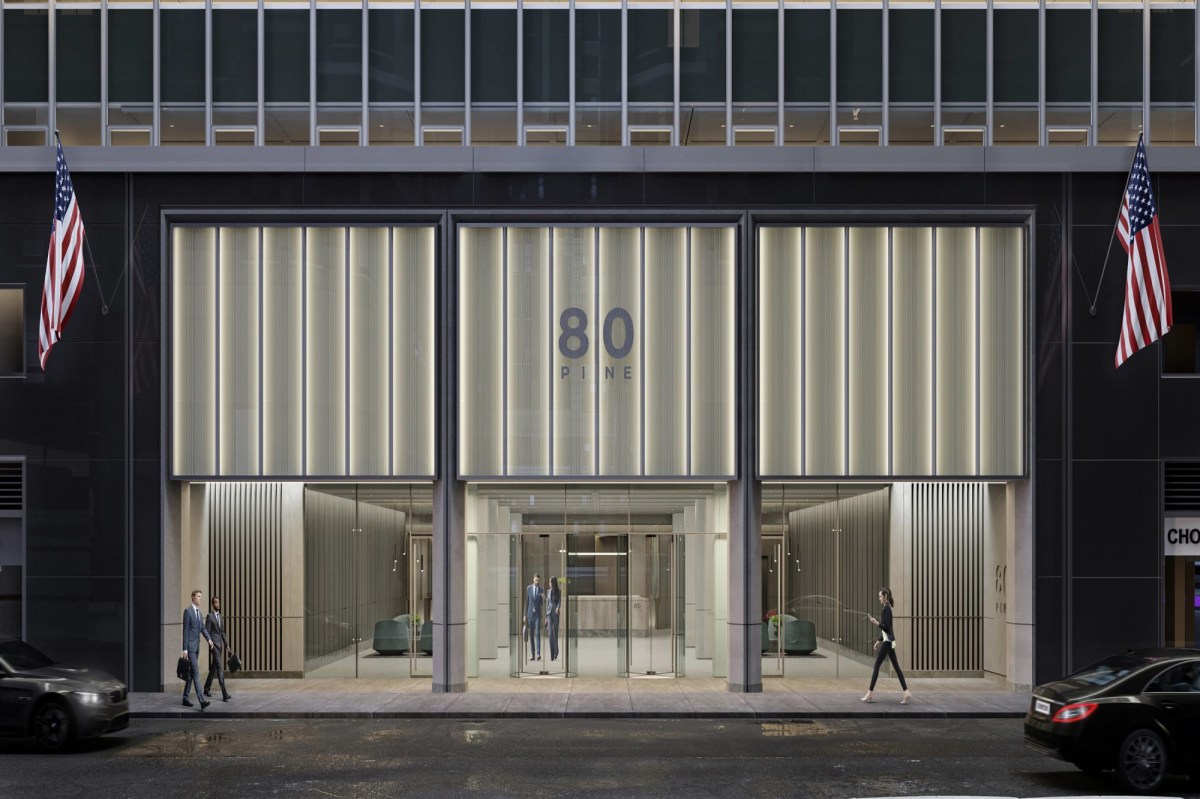 Just as the downtown office market is starting to look challenging, change is coming to 80 Pine St., the full-block, 1.2 million square-foot office tower developed by the Rudin family that opened in 1960.

Faced with upcoming lease expirations that will leave 800,000 square feet vacant, including by AIG late next year, the Rudins have tapped Fogarty Finger Architecture to design a new ground floor lobby and entryways. The reconfigured lobby can provide a “building within a building” option for a large new tenant.

Rudin has tapped a JLL team that includes Frank Doyle, Alexander Chudnoff and Peter Riguardi to lead the leasing and marketing campaign. Asking rents are in the mid-high $50s per square foot.

Rudin Management senior VP Samantha Rudin said the “fourth generation of the family business is excited to revitalize and reinvest in this important downtown office tower.”

“Like the rest of the city, it isn’t a pretty picture,” La Russo said.

She added that the “active requirements” for space downtown fell from 4.5 million square feet at the end of 2019 to about 2.8 million today. Total third-quarter leasing of 455,000 square feet was down 12 percent since the second quarter.

In such an environment, “Landlords have to put their best foot forward,” LaRusso said.

The expanding school signed a lease for the 33,915 square feet left behind by Shetler. The space was already set up for studio and music use, so few changes had to be made.

Jeffrey Rosenblatt, executive vice president of brokerage Square Foot, repped both the tenant and landlord. He had been working with AMDA to find more space than it already has at several nearby locations due to social-distancing rules.

Rosenblatt had to guide the deal through several “pauses” in the process that resulted from government lockdowns. The asking rent was $59 per square foot.

Legendary restaurant pioneer Pino Luongo, who helped turn on New Yorkers to northern Italian cuisine in the 1970s and ’80s, is still in the game — and growing.

The larger is at 307 Spring St., the former home of celeb-magnet Giorgione, which closed in January. It has 2,500 square feet on the ground floor and 2,500 more on the lower level.

The asking rent was $300,000 a year, said prolific dealmaker James Famularo, who brokered the lease.

It’s expected that both venues will be based on Luongo’s popular, rustic Tuscan-inspired Coco Pazzo concept, which currently has a home on Prince Street. Luongo also currently runs the successful Morso on East 59th Street.

It’s the company’s third location in Manhattan and its new flagship.

They describe it as “a gigantic photo-op chockablock with architectural treasures for both locals, out-of-towners, architects and designers.”

Why You’ll Regret Buying A Home In 2023
3 Real Estate Investing Strategies You Must AVOID in 2023
Home Sales Fading: Florida Housing Market Update
2023 HOUSE PRICES – Do NOT Submit Any Offer Until You Watch | Buying a Home 2023 Buyers Market 2023
Housing market ‘will be struggling for a little while longer,’ economist says