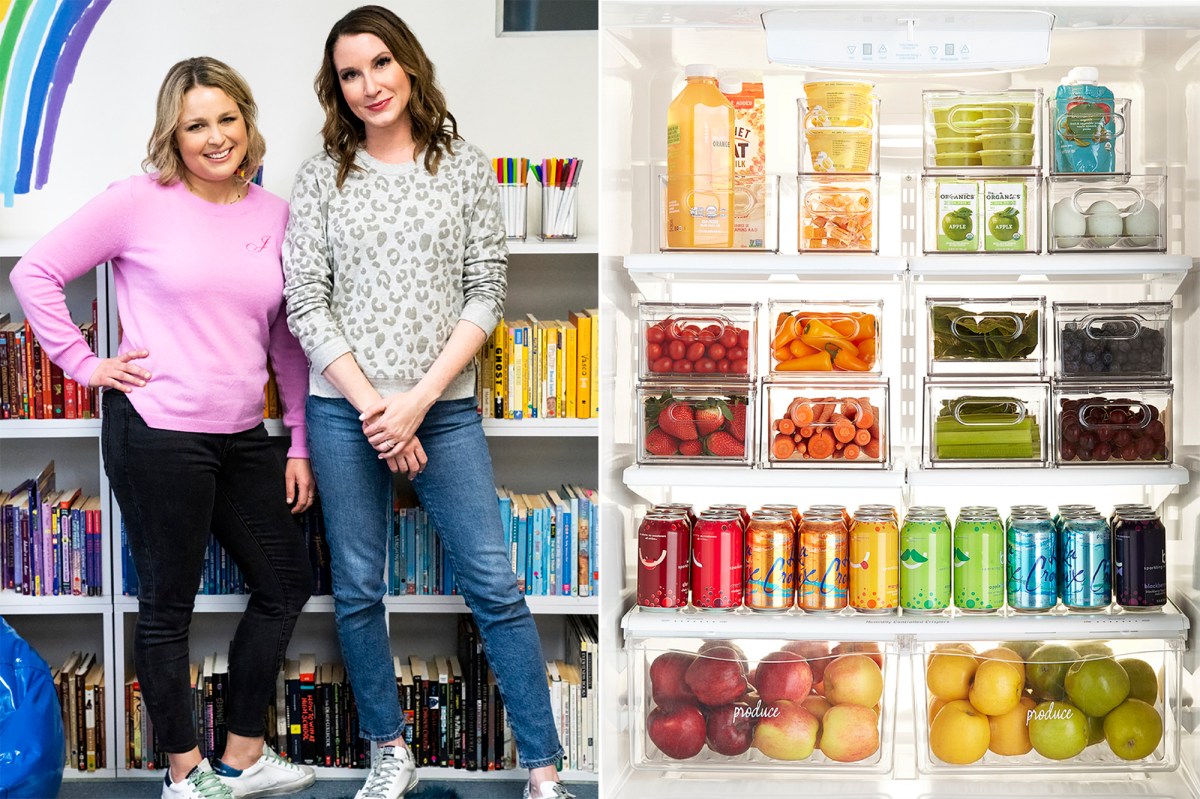 It’s a bottle of crushed red pepper that flummoxes professional organizers Clea Shearer and Joanna Teplin in episode six of their Netflix show “Get Organized with The Home Edit.” They’re revamping the small kitchen of a family of four in Brooklyn, and they can’t decide how to categorize the spice. Is it “international flavors”? Or does it go in “finishing,” with salt and black pepper? Or maybe it’s “cooking”?

This impasse shows a lot about the duo: You see how they fret over the smallest of details; you learn that they are seemingly oblivious to how one might use this very basic ingredient (not knowing how to cook is a not-insignificant part of their persona); and you get a glimpse of their process.

“If the category doesn’t work, sometimes you have to take the category higher and get a bigger overarching theme,” Teplin says to the camera.

As they consider the placement of a commonplace spice as seriously as one might weigh changing jobs, two assistants scurry around in the background, trying to make order out of a sea of kitchen tools and water bottles.

The eight-episode Netflix series, released on Sept. 9, rocketed the pair to fame. Before the release, the organizing company had roughly 1.7 million Instagram followers. At press time — less than one month after the premiere — they have more than doubled that to reach 3.9 million. At the start of the show, Shearer proudly states that the duo has grown their entire business through Instagram, and many of the clients attest on camera that they discovered @TheHomeEdit through the social media platform.

An impressive roster of vocal celebrity clients and fans, from Reese Witherspoon to Khloé Kardashian, helps, too. And their services don’t come cheap: $185 to $250 per hour for a two-person team, plus the cost of hotel, airfare, expenses and any products purchased.

A glimpse at The Home Edit’s Instagram feed shows that its particular brand of organizing focuses heavily on styling, most often by arranging belongings — be they books, snacks or board games — in rainbow order, stacked in sparkling acrylic bins.

“For us, it doesn’t end with sorting the systems and putting it back in an organized fashion,” Shearer told The Tennessean in 2016. “It really needs to be stylized, it needs to fit the aesthetic of the home, it needs to be properly labeled, and it needs to be color-coded.”

Shearer and Teplin evangelize a three-part process: edit, categorize, contain. First, you weed out things you don’t use or need. Next, you sort items into groups based on type or use. Then, you contain everything in bins, baskets, lazy Susans or drawer dividers, arranging things in a rainbow. It’s easy to see why such a visually appealing end result took off on a photo-sharing platform and earned them a cult-like following.

The Netflix fame is mere weeks old, but the duo met and founded The Home Edit in August of 2015. Both women had relocated to Nashville because of their husbands’ jobs. A mutual friend tried to set them up — they’re both from California, had backgrounds in organizing and goals of starting a company — but Teplin at first said she wasn’t interested.

“I did not need a business partner, and I did not need a new friend,” recalled Teplin, 42, during a 92nd Street Y livestream event. But the ever-persistent Shearer, 38, convinced her to have lunch. There was an instant connection. Teplin revised her initial stance: “The second I met her, I thought ‘One hundred percent this will work.’”

By the end of the meal, they had set up their business; they were securing social media handles and finalizing a logo within 12 hours.

Just months later, they secured their first famous client, Christina Applegate — Teplin’s child had gone to a Los Angeles preschool with the star’s daughter — by offering their services in exchange for an Instagram post by the “Married With Children” actress.

Applegate, in turn, introduced them to Selma Blair, and they soon found themselves the go-to organizers for Hollywood’s elite. In 2016, just before the brand celebrated its first birthday, Architectural Digest and Domino featured The Home Edit, and they hit 100,000 Instagram followers by the end of that year. Then came branded merch, a Target collaboration, expansion to new cities, a DirecTV show produced by Reese Witherspoon’s company Hello Sunshine, a best-selling book and brand-new sequel, and a Container Store line.

“We said yes to everything,” Shearer said during the 92nd Street Y talk. “You never knew when doors would open.”

The word-of-mouth accolades among celebrities intensified, too. The fandom is captured in the Netflix series: “Desperate Housewives” actress Evan Longoria enlists Shearer and Teplin to move son Santiago, 2, out of his nursery into a “big boy room.” She wants to be able to see all of his (many) clothes, so his walk-in closet is the focus of their makeover.

Meanwhile, repeat customer Khloé Kardashian is already “the most organized human,” according to Shearer. On the show, the reality star’s garage becomes a parking lot for 2-year-old daughter True’s luxury toy cars, with dedicated spaces outlined in pink tape.

Another episode features Marietta “Retta” Sirleaf. “I’m obsessed,” the “Parks and Recreation” star tells the ladies, as she greets them at her door holding their first book. Retta had already renovated her Los Angeles home, and hires The Home Edit to help her with the last space: a converted garage that the pros transform into a leisure lounge.

It’s impossible to tell how much celebrity endorsements contribute to The Home Edit’s bottom line, but the show has undoubtedly led to a steady stream of new business.

In addition to reports of sold-out items (from $5.99 to $29.99 per piece) at the Container Store, their first book, published in the spring of 2019, is currently out of stock on Amazon.

But the larger platform has also flung open the door to detractors. Many critics liken the show to one big Container Store ad, as every space is revamped using their products sold exclusively at the big-box retailer.

The comments sections of The Home Edit’s Instagram account, and myriad Twitter threads, are full of viewers critiquing the lack of diversity on The Home Edit’s staff (their assistants are all white women), the excessive reliance on plastic (see: the product line), and the inherent commercialism required by their process (you have to buy new things to store your old things).

Plus, there’s the fact that the show doesn’t offer practical advice as much as it shows off the oversize homes of rich people with too much stuff — the basement playroom of sitcom star Neil Patrick Harris’s Harlem brownstone, the walk-in closet overflowing with vintage Chanel and designer handbags of stylist Rachel Zoe, the grocery-store sized pantry and refrigerator of “Fast & Furious” frontwoman Jordana Brewster. (Each episode does feature one regular family in addition to a celebrity.)

Many find Shearer and Teplin’s loud and bubbly personalities, which earned them a following in the first place, grating.

Perhaps the biggest complaint about the show is that it’s kind of boring. Take the red pepper situation: It’s a low-drama moment over a non-important thing that has zero emotional stakes. As Kyle Chayka writes in the New Yorker, the show is “weirdly bloodless, which is why it ends up being so unsatisfying.”

It’s a strange contradiction, considering that The Home Edit’s Instagram feed is often described as a deeply satisfying balm for the chaotic world in which we live: beautiful photos of pantries with matching cans stacked neatly on tiers, labels perfectly aligned; a ROYGBIV wall of stilettos in a closet larger than most New York kitchens; refrigerators lined only with colorful cans of LaCroix and packed with fresh fruits and veggies in literally every color of the rainbow.

These are spaces that are attractive and pleasing to look at, even if organizing books by color makes you want to scream. It’s clear that The Home Edit isn’t for everyone. But considering that the duo’s following grows every day, it sure is for a lot of people.

STOP BUYING HOMES: The Housing Market is a Total SCAM
Buying A $5,000 House: Cheap Houses For Sale 😱
Zelenskyy talking about peace? No, he is talking SECURITY. MORE GUNS! #shorts
Real Estate Investing Strategies in a Changing Market 2023
How to Get Started In Real Estate Investing: What State is Best? #shorts #realestateinvesting