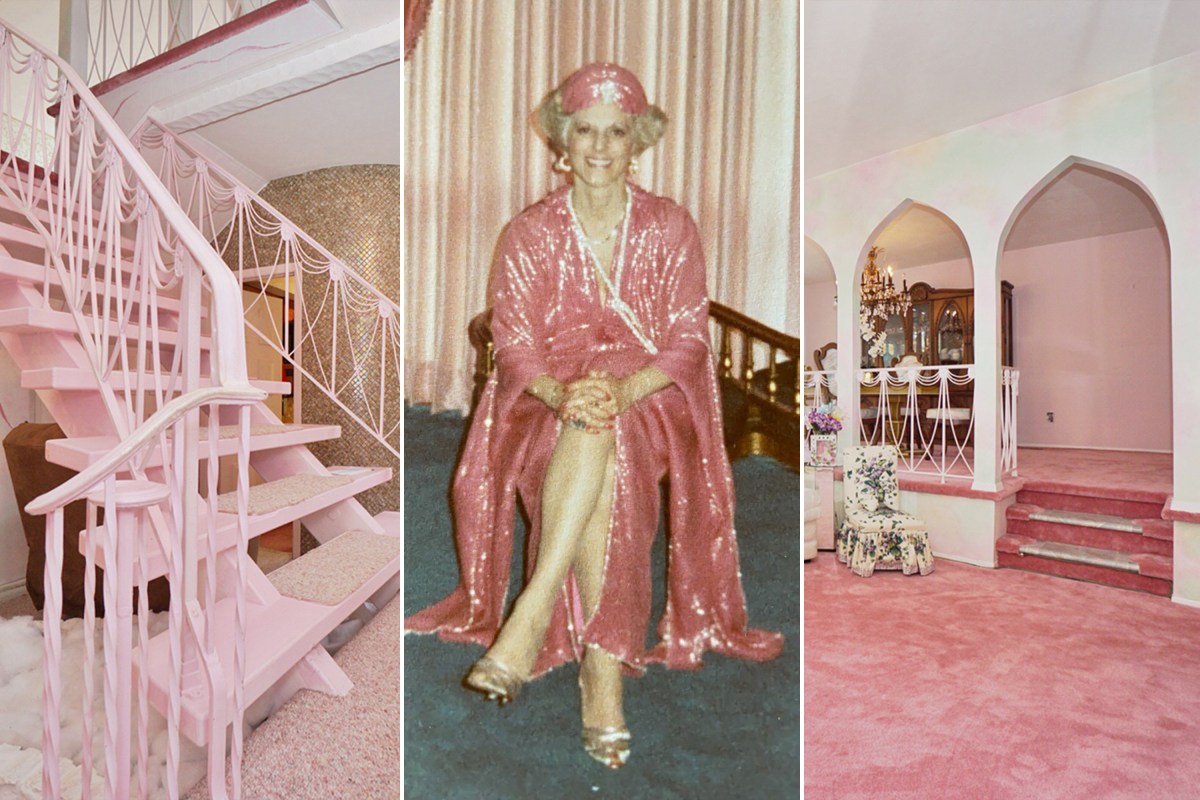 Barbara DeLeo rolled out the pink carpet in her Staten Island home when she moved there in 1969.

Her four-bedroom property is completely covered in shades of blush — her favorite color — from a bar and bathroom tile to wall coverings and window trim.

“Everyone … calls it the bubblegum house,” said DeLeo, 83, a retired deli owner.

A well-preserved time capsule with retro flair, the home at 820 W. Fingerboard Road in Grasmere — a few minutes west of the ramp to the Verrazzano-Narrows Bridge — raised a few eyebrows when it hit the market for $829,000.

DeLeo and her late husband, Richard, oversaw the ground-up construction of their pink palace in 1969. They envisioned a dream home where they would raise their family. But the decor wasn’t always so rosy.

Take the central staircase. “When I first built the house, it was brown — and then I said, ‘That’s gotta go,’ ” DeLeo told The Post. “I love pink.”

Although the home’s facade is an unassuming brown, its interior became more monochrome over time. Family photos show an upstairs sunken living room once had a blue carpet and dark pink curtains; now, it has wall-to-wall pink carpeting.

On the house’s lower level, the pink steps rise from a living area where pink walls and carpeting match a pink bar — its counter crowned with a shiny faux palm tree. Off to one side is a black-and-white kitchen that leads into a bathroom with pink tile walls and a bold red floor.

Upstairs, the sunken living area connects to a pink-carpeted formal dining room with a kitchen nearby. A pink hallway connects to three of the bedrooms, all of which have the same pink floor covering.

DeLeo’s daughter, 62-year-old Barbara Lynn Veneziano, told The Post she, her parents and her brother, Anthony, occupied the upper level. For a time, her grandparents and aunt lived downstairs — a reason why the home has a kitchen on each floor.

While DeLeo tapped a builder, the late Jerry Mattia, to decorate the home, it was her vision.

“He did everything I asked him to do,” she said.

That included carving out arches between the upper-level living and dining rooms, installing floor-to-ceiling mirrors and designing a large upstairs bathroom, which has mirrored walls and a sunken bathtub.

“That was special-made, that tub,” said DeLeo, who has four grandchildren.

The property also has three bathrooms and a single-car garage — all on a 4,312-square-foot lot.

Which is just too big for the octogenarian. Richard, a one-time electrician for Verizon, passed away in 2006, and DeLeo suffered a stroke two years ago. Even though she is ready to downsize, the decision to sell didn’t come easy.

“I was heartbroken, really,” she said.

Added Veneziano, “My brother and I both cried when we told [the real-estate agent] to take it,” noting the house contains “a lot of happy memories. A lot of parties went on in that house.”

After the listing went live in August, Veneziano said, the cosmetics brand MAC reached out to do a shoot there. But because the family was worried about the coronavirus pandemic, it didn’t end up happening.

The family hopes their pink palace ends up in the hands of buyers who will look after it as painstakingly as DeLeo did.

“God was good to me, and I took care of it, because I loved it,” she said.

The house’s palette could have been divisive, but ultimately the DeLeos cared for it wholeheartedly.

“It was bright and cheery,” Veneziano said. “I don’t think all the men loved it too much, but my father never complained.”