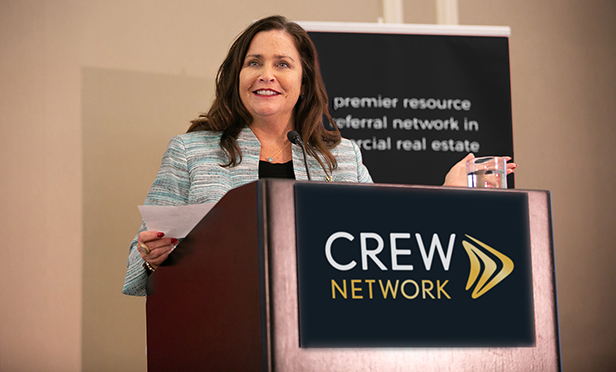 Despite a closing gap in base salaries, women in the commercial real estate industry receive a whopping 55.6% less in commissions and bonuses than their male counterparts.

That’s according to the 2020 Benchmark Study Report on Gender and Diversity in commercial real estate, the fourth study over the past 15 years by CREW Network, which partners with the MIT Center for Real Estate to conduct the study. The study also reveals that women occupy 36.7% of the commercial real estate industry, a percentage that has not changed much in the last 15 years.

The commission gap and lack of advancement news was sobering for an organization that has been championing women in the predominately male industry for the past 31 years. The commission gap “was surprising and disturbing, and very disappointing,” said Wendy Mann, CEO of CREW Network.

Even more disappointing was the much larger commission gap for women of color, she said. Black women earn 71%, Asian women earn 73%, and Hispanic/Latinx women earn 74% less than the commission and bonuses that their male counterparts earn.

The CREW study also found women are less satisfied with their jobs, a figure that was the lowest level since the study began in 2005, and that women now occupy 29% of the brokerage positions – more than ever before – which is a 6% increase from 2015.

This year’s report is the first year the CREW study began asking diversity questions. It was no surprise that the commercial real estate industry isn’t very diverse. Only 16% of respondents reported that 25% or more of the professionals in their workplace are Black, indigenous and people of color (BIPOC).

But Mann was encouraged that respondents indicated there is a culture shift afoot regarding diversity, equity and inclusion due to external industry pressures and new mandates from leadership.

“We found that really promising,” she said. “The diversity data reinforces that the industry must take intentional action, to recruit, retain and advance diverse talent. Research indicates – outside and ours – that companies that prioritize diversity are outperforming others; they have greater earnings, better governance, greater innovation and more opportunities.”

“Commercial real estate firms that don’t prioritize DEI will be left behind,” Mann added. “They will miss the talent and miss the opportunity to have a more profitable bottom line.”