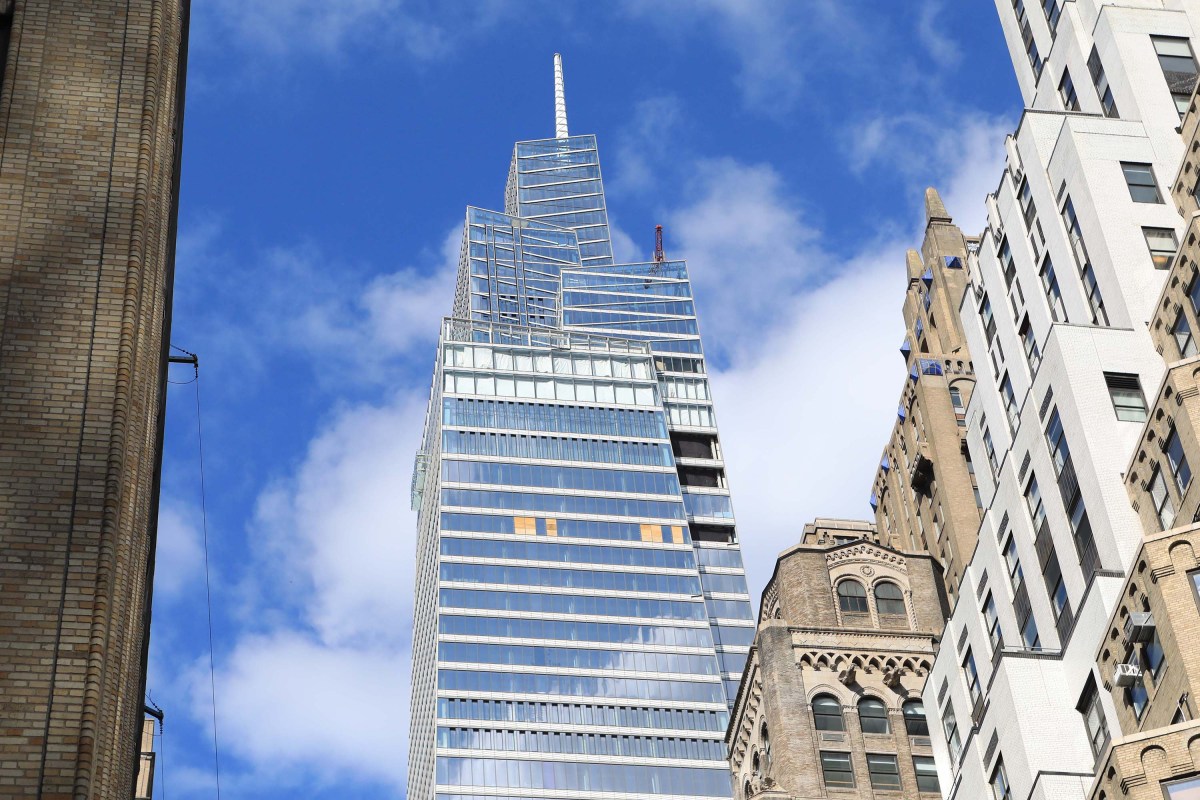 Creation of the mighty new skyscraper One Vanderbilt started with the almost incidental purchase of an obscure old office building 19 years ago. The project negotiated a treacherous development labyrinth of zoning challenges, a $1 billion lawsuit, activists’ demands to change the design, complex negotiations with the state and city — and a struggle with two Irish bars that didn’t want to leave.

But on Monday, SL Green’s One Vanderbilt, central Midtown’s tallest skyscraper ever, opens to office tenants with a public ceremony — and to widespread praise.

New York magazine’s architectural critic, Justin Davidson, earlier had described it as “not just a machine for making money, but a juncture in the city’s life . . . that rarity, a civic-minded Goliath,” for the tower’s integration with new mass transit and public amenities that cost SL Green $220 million.

In all, SL Green spent $3.3 billion to assemble the site and to build the 1,401-foot tall, 77-story, 1.7 million-square-foot tower designed by Kohn Pedersen Fox Associates.

Publicly traded SL Green, which owns 71 percent of the project in partnership with Hines and the National Pension Service of Korea, is the city’s largest commercial landlord. But One Vanderbilt was still a gamble for CEO Marc Holliday, with pundits warning of a new-office-construction glut as mighty towers went up at Hudson Yards, Manhattan West and the World Trade Center.

One Vanderbilt is 67 percent leased to such companies as TD Securities and TD Bank, Carlyle Group, Greenberg Traurig, McDermott Will & Emery, KPS Capital Partners — and to SL Green itself, which will have 70,000 square feet. Some will begin moving in by November or December.

That means about 33 percent remains to be spoken for at a time when pandemic-battered companies are reassessing their real-estate needs. But One Vanderbilt is well equipped to take on the challenge, thanks to its ideal location, column-free floor plates, ceiling heights from 15 to 24 feet, and $17 million in sustainability and wellness features.

The saga started when SL Green purchased 317 Madison Ave. in 1999. It later snatched up three more properties on the block bounded by Madison and Vanderbilt avenues and by East 42nd and 43rd streets.

SL Green had no specific vision for the site until it bought the last piece of the puzzle in 2011 from a Chinese investor who wasn’t expected to sell.

Next came rezoning needs and tricky air-rights transfers. Then-Mayor Mike Bloomberg yanked an expected up-zoning of all of East Midtown in 2013 when it became clear the plan would be rejected in the City Council. It was “a body blow” that left SL Green with four obsolete buildings of limited potential.

One Vanderbilt got the biggest bump-up, thanks to an agreement for SL Green to pay for and build a batch of transit and pedestrian amenities to link the tower directly to Grand Central Terminal underground, widen and improve its confusing subway passages and stairways, and create a public plaza.

The next problem: Some 200 tenants on the block had to be relocated. The toughest to budge weren’t entrenched financial or law firms, but Irish pubs Annie Moore’s and Patrick Conway’s.

“They couldn’t start demolition with the bars in the way,” an insider recalled. “They both had long-term leases, and they were fierce competitors, which made it much harder to induce them to leave. Neither one wanted to be bought out first because the other could then ask for a higher price to move out.”

It took SL Green two years to finally negotiate move-outs. Then, in May 2015, investor Andrew Penson, who owned the land under Grand Central Terminal, sued the city and SL Green for $1.13 billion, claiming that the rezoning had cheated him out of air-rights revenue he thought he should have received.

The suit was yanked in August 2016, but it cost SL Green precious time. Even so, construction ran ahead of schedule and leasing proceeded swiftly, led by a CBRE team headed by Robert Alexander.

Superchef Daniel Boulud signed up in 2017 to open an 11,000-square-foot, fine-dining restaurant on the second floor overlooking Grand Central. It’s set to open in early 2021.

Later will come an observatory on the 57th to 59th floors , which will have its own grand unveiling some time in 2021.

What Drives You? (Discovering Your Real Estate Burning Why)
Flipping Houses and Landlord Business on the Rise
More Russia fear-mongering! When is this madness going to end? #shorts
Hang on, now you have to pledge allegiance to the climate change gods to get a job? | Redacted News
$70K Profit on Out of State House Flip! – Flipping Houses Long Distance – Numbers and Takeaways