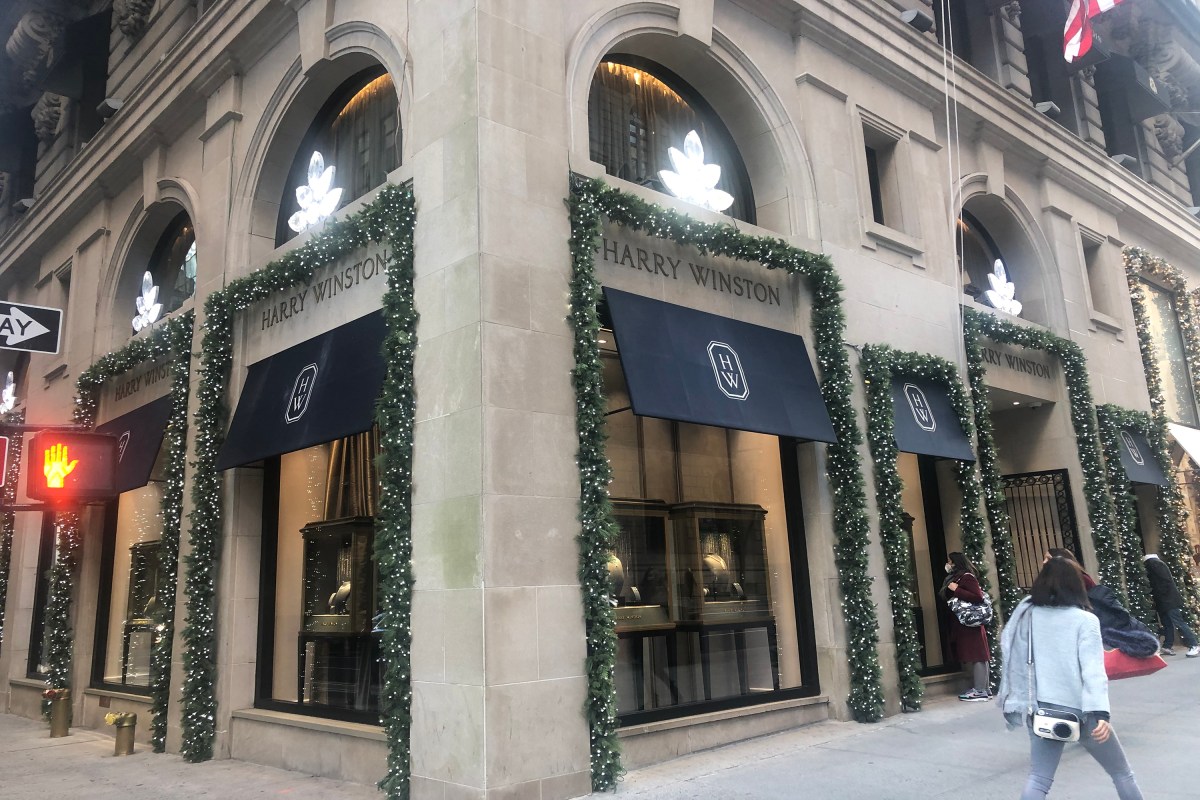 Diamonds are forever on Fifth Avenue, where big moves by premier gem house Harry Winston will soon put glitter back into the pandemic-battered shopping corridor.

In a major breakthrough for the limping boulevard, Harry Winston is expanding into the long-vacant former Henri Bendel space at 712 Fifth. The elegant, landmarked storefront is next door to Harry Winston’s original home at 718 Fifth — where the jeweler will return when renovations are completed.

Winston renewed its 16-year lease on 19,000 square feet at 718 simultaneous with signing for 18,000 square feet more at 712 – nearly doubling its street-front presence on the avenue. The company won’t occupy No. 712 until construction’s done, which could take several more years. But its return to 718 Fifth will occur sooner.

Colliers vice-chairman Brad Mendelson said that landlords who previously asked for $5,000 per square foot at sidewalk level are now asking $2,500 – which hasn’t yet been low enough to lure new tenants.

Harry Winston is temporarily selling its precious baubles at Vornado’s St. Regis Hotel retail condominium two blocks south. Its landlord at 712 will be Paramount Group, which owns the entire building. Paramount and Harry Winston are 50-50 partners in 718 Fifth, the five-story, 1870s-vintage townhouse that has been the gem merchants’ home since 1960.

News of the Winston moves surfaced in Paramount’s and Vornado’s third-quarter SEC filings and conference calls. Paramount CEO Albert Behler said that integrating Winston’s space across several floors “reflects the creative efforts of both the Paramount and Harry Winston teams. The 16-year lease has a weighted average initial rent of $437.43 per square foot” – a so-called blended rate across several floors that’s harder to evaluate than sidewalk numbers.

One industry source called it “cheap.” However, Vornado president Michael Franco said in an analysts’ call that he regards the Paramount lease figures “as a positive” for the avenue.

Interior construction at 712 and 718 Fifth will yield a much wider ground-floor footprint for Harry Winston. There will also be new office and storage space on upper floors of both buildings.

Vornado won’t likely lose a dime on the Winston space when it moves out. Its retail lease at the St. Regis is with Swatch – which owns Harry Winston and plans to replace it with another luxury brand when the jeweler returns to 718 Fifth.

Vornado’s Franco even said “We see them moving across the street to their original home as a positive for Fifth Avenue.”

Colliers’ Mendelson, who repped Harry Winston in its move to the St. Regis in 2015 when he was at Cushman & Wakefield, said of the brand’s new leases, “It’s a shot in the arm for Fifth Avenue. The remaining [vacant] spaces will hopefully follow after the pandemic. Then, as less space is available, prices will rise on a supply-and-demand basis.”

Reflecting the malaise, Lauren leased its corner store at 711 Fifth at East 54th to mid-market sportswear chain Mango for less than 20 percent of Polo’s $27 million annual rent. However, a source called the bargain-basement price an “aberration. It’s a sublease between two retailers. No landlord would ever give space away like that.”

The Harry Winston expansion comes amidst a backdrop of less-publicized new investment energy. Christian Dior recently signed a four-year retail lease at 767 Fifth, the former GM Building, to use while it redesigns its East 57th Street digs.

There’s lots of development in progress or coming soon as well – which will temporarily make certain locations unattractive until the work’s completed.

Developer Michael Shvo plans to add 10 stories to 685 Fifth Ave. to make room for luxury condos to be managed by Mandarin Oriental Hotel Group. Rolex plans to replace its 12-story building at 665 Fifth with a 25-story tower designed by David Chipperfield Architects.

And Brookfield is completely re-designing and re-cladding former Kushner property 666 Fifth, which will emerge as 660 Fifth to avoid Satanic associations.

“People are investing in Fifth Avenue” and, once things settle down, “We will be well poised for full recovery.”

Real estate outlook 2023: What buyers, sellers, and investors need to know
Where the Money is in Foreclosures
What Drives You? (Discovering Your Real Estate Burning Why)
Housing Market and The Economic Recession: A Look into 2023 Real Estate
Are Mandates coming back?!?! #shorts