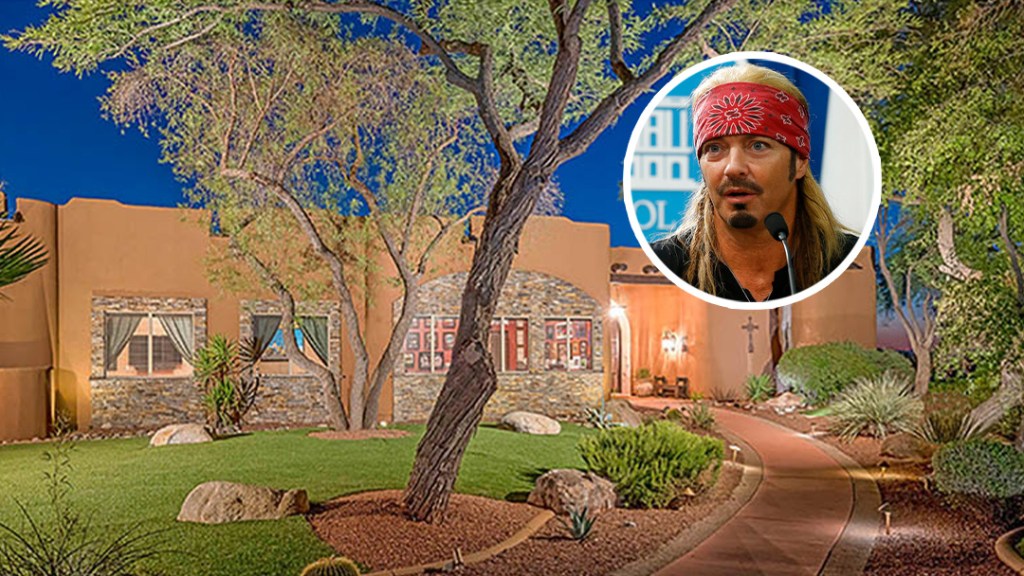 For a notoriously hard rocker with a penchant for partying, Bret Michaels’ Scottsdale, Ariz., estate is surprisingly subdued. No leopard print furnishings, no under-lit onyx wet bar and not a stripper pole in sight. Indeed, the single-story adobe-inspired home of the kerchief-wearing frontman of iconic ‘80s hair band Poison, who’s long had a side hustle as a reality TV star, is a fairly understated study of earthy desert inspired tans and beiges, all 7,400-and-some square feet of it. Should Michaels get anywhere near his nearly $3.3 million asking price, it would tally up to a tidy profit; he picked the place up in 2016 for just over $2.2 million.

The 5 bedroom and 6.5 bath main residence spans about 6,200 square feet, according to listings held by Bob Nathan of Engel & Völkers, while a spacious separate guesthouse chips in another 1,200 square feet with three more bedrooms. Paradoxically, and like many multimillion-dollar estates in the rain-starved region, the gated compound is a verdant oasis-like respite from the scenic yet unrelenting desert sandscape, with lushly watered lawns, shaded gardens, swaying palms and a turquoise swimming pool.

A beige-tinted driveway circles up around desert plantings before a double garage, and a foot path curves up to a deep porch with a rustic set of wood doors set into a stone arch. Terracotta-style pavers continue from the porch in to and throughout the mansion’s main living and entertaining spaces, most of which are painted a warm, peachy version of beige. The living room, where half a dozen guitars hang on the wall alongside a portrait of Michaels, features hand-hewn beams across its high ceiling, and the dining room is demarcated by an abstractly asymmetrical accent wall. With faux-distressed cabinets, granite counters and up-to-date appliances, the eat-in cook’s kitchen flows in to the family room where a kiva-style fireplace adds authentic adobe charm. Glass sliders open the room to the backyard.

Michaels’ office has light wood floors juxtaposed with burgundy walls hung with a collection of gold and platinum albums and associated artwork. A library with tan carpeting and built-in shelves crammed full of sports memorabilia rather uncomfortably does double duty as a gym with a handful of exercise machines pushed up against the walls, and the spacious master suite features coffee-colored velvet draperies over sliding glass doors.

There’s really no point in living in the scorching desert unless you make the most of the cooler morning and evening temperatures outside. Thus, the back of the home enjoys a wide, red-curtained loggia ideal for al fresco living with ample dining and lounging areas along with a pool table. The loggia overlooks the lagoon-inspired swimming pool, where a slide cuts through a man-made tumble of rocks. A bridge traverses a shallow ravine to link the main residence to the guesthouse, out back of which are a half-court basketball court and a sand volleyball court. There’s even a small dirt bike trail carved into the desert scrub.

Between stadium tours with Poison, Michaels released copious solo music and established himself as a reality T.V. staple, most notably in VH1’s “Rock of Love with Bret Michaels” and “Bret Michael’s: Life As I Know It.” He also appeared on and won the third season of Donald Trump’s “Celebrity Apprentice,” gifting a whopping $640,000 to the American Diabetes Association. More recently, Michaels has dabbled in the real estate game. In 2014, he ponied up $3.05 million for a home in Calabasas, Calif., that he sold in 2016 for $3.43 million. And, just last month he sold a resort-like estate in Westlake Village, Calif. — about 40 miles northwest of downtown L.A. — for $4.75 million, a million-dollar-plus profit on the 2.5-acre spread he picked up close to six years earlier for not quite $3.5 million.