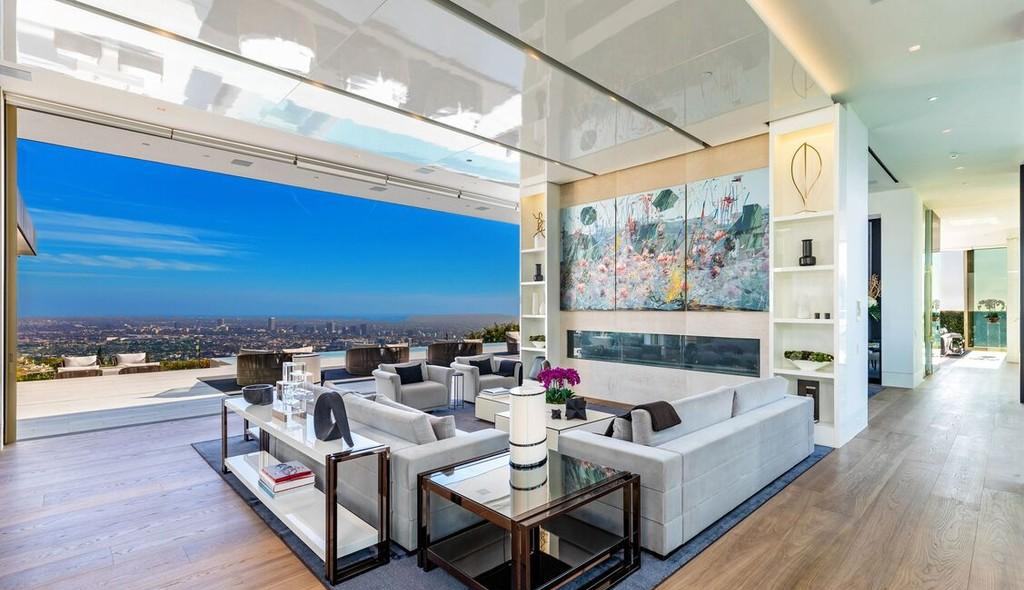 More than three years after it first hit the market, one of the Los Angeles market’s most notorious spec-mansions — the real estate white elephant formerly known as Opus — has finally found a buyer. The 20,000-square-foot contemporary made global headlines in summer 2017, when it debuted with a $100 million asking price and perhaps the raciest real estate marketing campaign of all time: a promotional video showing nude women, covered in gold paint, cavorting together in bed.

The decidedly unsubtle message to sex-starved tech entrepreneurs and other businessmen: cash in your latest app, sell your company. Buy this house and you’ll buy a harem of women to go with it; live like a modern-day Casanova. An appropriate message for the L.A. buyer pool, perhaps, but the plan failed.

It took a change of realtors, multiple price reductions — to a final $60 million ask — and a second, far more subdued marketing campaign to sell Opus. While it doesn’t appear the transfer has officially recorded, the deal is all but done, according to sources. And in an appropriate twist of irony, the buyer is female.

The new owner, who goes by the Americanized moniker Josephine Yeh but whose legal name is Bin Fen Cheng, hails from the affluent San Gabriel Valley city of San Marino, where she’s lived for more than two decades in one of the neighborhood’s largest and most lavish estates — a place she custom-built herself.

For its part, Opus is nothing if not large and lavish, albeit in a more flashy, popping-bottles-of-Cristal-in-Saint-Tropez sort of way. Flush with success — and cash — from several of his earlier real estate projects, Niami paid $9.8 million for the one-acre property in 2012. He quickly razed the existing structure and built his new residential showcase to be grander and gaudier than his previous works, complete with extravagances such as a walk-in champagne refrigerator, and a subterranean auto museum with a gold Lamborghini and a gold Rolls Royce, plus enough white marble to make a foreign potentate — or a “Miami Vice” villain — blush crimson. For all this, he believed, a buyer would pay him something close to $100 million.

And who could blame him? The house next door, a comparably sized and similarly extroverted contemporary mansion, had sold for a record $70 million to Minecreft billionaire Markus “Notch” Persson. Notch flew in from Sweden just to see it, lured by the slick marketing campaign. The home’s Instagram-famous candy wall and underground auto museum were appealing, and $5,000 in catered sushi sealed the deal.

That was 2014, however. By the time Opus was finished, in 2017, the market had shifted. Billionaires were no longer interested in the latest modern white box; they wanted true trophy estates, ones with either historical provenance or lots of flat land. Opus, set on a hillside lot with jetliner views but little yard space, has neither of those. On top of that, real estate insiders believe the sexy marketing tease was actually a turn-off, disgusting family-oriented buyers and leaving other prospective clients limp and unsatisfied.

So the bloated house became an emblem of L.A.’s real estate excess. Seeing Niami’s early success, other local developers had built too greedily, churning out dozens of big white boxy mansions for buyers who didn’t even exist, only to watch them languish on the market. Opus, the biggest and baddest of them all — excepting Niami’s still-unfinished “The One” compound — sat alone and unloved on its Trousdale Estates hill.

Undeterred, Niami continued trying to sell the house until earlier this year, when one of his lenders — local doctor-turned-real estate investor Joseph Englanoff — finally took control of the property. Englanoff gave the place a quick renovation, righting many of the previous design wrongs.

The silly champagne refrigerator became a pantry. Wide-plank oak floors replaced cold white stone. Gold trim around the windows and doors was painted a matte black. And when it returned to the market, Opus was no longer Opus — it was just another nameless L.A. mansion, albeit one with a $59.95 million pricetag. “No more gimmicks” became the unofficial ethos. Blend in, don’t be different for different’s sake.

There are still two swimming pools, a movie theater, two kitchens and two bars. Each of the seven bedrooms has its own ensuite bath. Panoramic views still sweep the shimmery Los Angeles skyline. But instead of gold cars, there’s a dinosaur fossil inside.

While it’s not yet clear what sort of discount she negotiated from the $59.95 million pricetag, Yeh is a seasoned real estate investor with decades of experience. And though ultra-low-profile — even many San Marino residents have never heard of her — she’s also an incredibly wealthy woman who can likely afford any house on the planet.

Research shows that through a vast network of LLCs and other holding companies, Yeh owns a Southern California real estate empire worth many hundreds of millions of dollars. Her assets include major shopping centers in Arcadia and Rowland Heights, plus apartment buildings and condo complexes from Rancho Cucamonga to L.A.’s Westside.

One of the biggest jewels in Yeh’s property crown is the Downtown L.A. high-rise building at 8th and Hope Street. Two years ago, in a move that shocked commercial real estate watchers, she paid a whopping $220 million for the multifamily complex, which stands 22 stories tall and includes 290 luxury apartments, plus a swimming pool and rooftop deck. The sale was L.A.’s biggest multifamily deal in all of 2018, and one of the biggest per-square-foot Downtown deals of all time.

Now in her early 60s and married with two adult children, it’s not clear what Yeh’s plans are for the 90210 property. But she doesn’t appear to be in any rush to move out of San Marino, where she and husband Tony continue to maintain a quiet lifestyle in their $15 million gated compound. That 2-acre estate includes a 10,000-square-foot mansion, a detached guesthouse, a full-size tennis court with viewing pavilion, a large swimming pool and separate reflecting pool. There are also broad, well-watered lawns, patios for grand-scale entertaining, plus a driveway and motorcourt that can accommodate 20+ cars.

Branden and Rayni Williams of The Beverly Hills Estates held the listing.