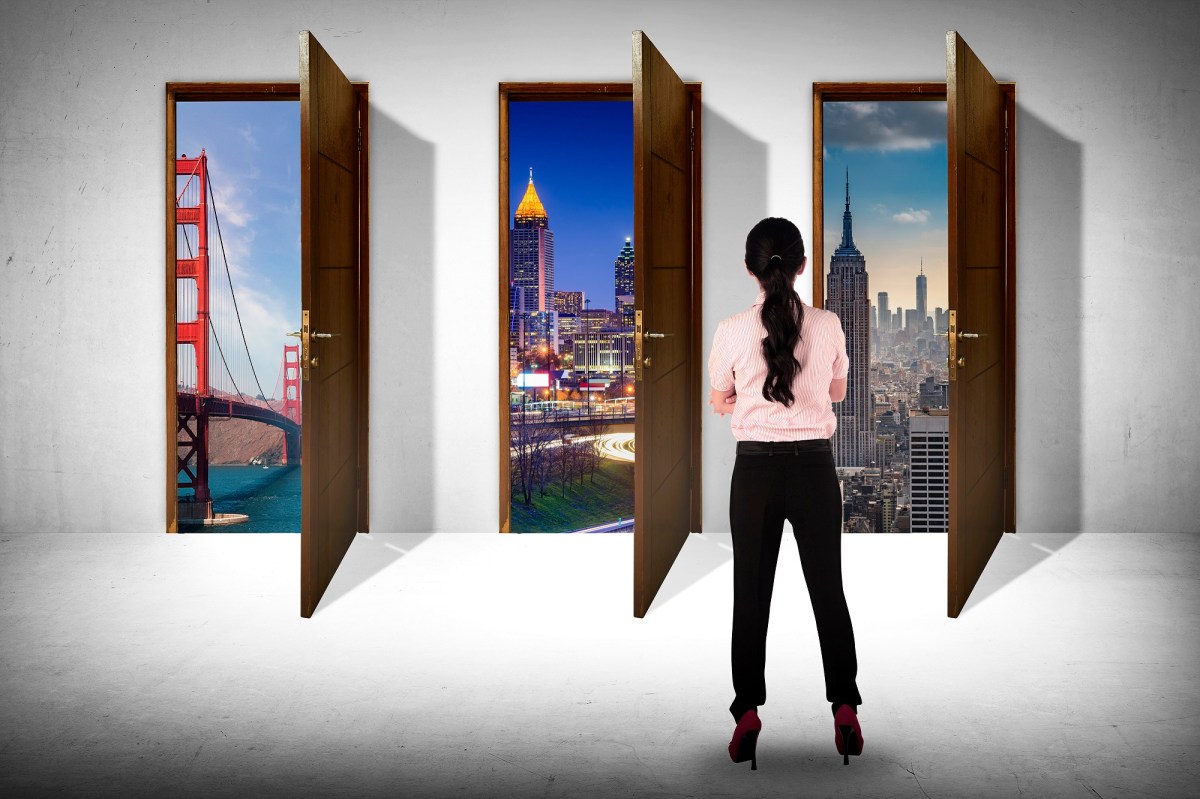 In August, Alexis Cohen and Brian Helfman started hunting for a larger apartment. The lease on their one-bedroom in Chelsea was up at the end of September.

And after spending the prior three months at Cohen’s parents’ place in Gloucester, Mass., riding out the worst of the coronavirus pandemic, the couple returned to the city hoping both to upgrade and to hold onto traces of the outdoorsy environment they’d come to enjoy in Massachusetts.

Cohen and Helfman thought a two-bedroom place in Brooklyn or the Upper West Side, maybe even one with an office, could be the answer. But after weeks of searching, something felt off — so when Cohen, a 30-year-old certified life coach, came home from socially distanced drinks on a recent Friday night and abruptly suggested moving to Colorado for a bit, Helfman was all in.

So it goes with decision-making during a pandemic. Plans are both upended and, strangely, more flexible. Faced with the ability to work remotely, many city dwellers have opened their minds to far-flung geographies, fueled by the idea that they can put stuff in storage and try living … pretty much anywhere.

Rather than moving permanently — a scary commitment at all times, but especially during uncertain ones — New Yorkers are choosing instead to test the waters, to use this limbo to explore locations and lifestyles they may have had neither the means nor the courage to test out before.

Some, including Cohen and Helfman, are even “trying on” multiple locations across the country for size. After some excited Friday-night Googling, the couple decided to push their time in Colorado to the winter to take full advantage of ski season, instead renting a cozy farmhouse upstate in Germantown, NY, for the fall, with plans to migrate to Florida at some point, too.

“We’re getting comfortable with the not knowing,” Cohen said. “We were craving freedom during this time. Letting go of a lease and not having to commit to a yearlong situation sounded really appealing, and it meant that we could go on an adventure. The unknown can be scary or exciting, and we’re choosing to look at it in an exciting way.”

That’s the right attitude to have during times of crisis, according to New York City-based psychologist Priyanka Upadhyaya, who said pandemic-fueled emotions are driving a lot of her patients to “test out” new locations, too. This craving for freedom coupled with a lack of desire to commit to one place is a direct reaction to a tumultuous period.

“New York as the epicenter has become symbolic of a war zone for many people, and with that has come a deep need to just get out, to feel free,” Upadhyaya said. “And while it’s impossible to escape the hardship we are living through right now, it is possible to figure out ways to infuse your life with newness and variety, and that’s what people who are gravitating toward this digital nomad lifestyle right now are doing. The idea of just moving and settling and creating temporary roots in a new place can be very powerful chemically in creating a positive mindset.”

It’s also an opportune time to see if mere daydreams — about, say, moving to a farm — can actually bear fruit. Brooklynite Mary Johnson, a 26-year-old project manager at Spotify, had always wondered if she could be happy at her grandparents’ now-vacant farmhouse in Rochester, Vt., a place she describes as “very remote, where you can hole up and wander around on dirt roads and look at goats and alpacas and bunnies and sheep.”

So when Johnson’s lease in Clinton Hill was up in June, she decided to give it a test drive.

“I originally had all these big plans to live by myself in Manhattan after living with roommates,” Johnson said, “but when it became clear that life was a matter of where you were going to be when you weren’t looking at a screen, I thought it would be nice to look at mountains and to connect in a spiritual way to my grandmother.” Now she spends her days on calls and her nights “seeing the glory of every sunset.” While she did have some misgivings about the isolation, she adopted a cat and has come to love the solitude.

“I thought I was scratching the rural itch by coming up to visit on the weekends, but being rooted here, however temporary, is different,” Johnson said. “This sense of belonging in a small rural town is something that I didn’t realize I wanted or needed so much until I was here.”

In fact, she’s come to love living in nature so much that she’s considering doing so elsewhere in the coming months, “maybe experiencing some wide open ocean time instead of wide open mountain time.”

New Yorkers trying out other home bases told The Post that the ability to experiment is a privilege that prompts them to think deeply and critically about their life trajectory in ways they might not have considered if not for the peculiarities of the pandemic.

Rose, a 28-year-old marketing liaison who asked to use a pseudonym for professional reasons, left the city in March to live with her parents in Atlanta for three months. She returned for a brief stint before shipping her belongings to Atlanta and subletting a place in San Francisco to spend time “vibing out” the West Coast and figuring out her next move.

“I had always flirted with the idea of moving to the West Coast, so I figured this was a good time to try it out. I’m single, I got laid off from my job and am searching for a new one, so nothing is tying me down right now,” she said. “As I made this plan and transitioned out of the city, I had friends who said, ‘So you’re giving up? That’s it?’ And I keep saying, ‘Not necessarily! This is a trial run. New York is never off the table.’ ”

And therein lies the beauty of, to use Rose’s phrase, “vibing out” other places. The test drivers do not hate New York. They do not think New York is dead. They believe that New York will be there when they conclude their experimental adventures elsewhere.

In fact, Mita Carriman, a New York native and travel entrepreneur who was inspired to set up shop in Barbados once she heard about their Barbados Welcome Stamp visa program — a popular new initiative that allows so-called “digital nomads” to live and work in the country for up to a year — says that her time in the country has made her appreciate her hometown even more.

“Because New York is such a melting pot, having these experiences in other parts of the world, and especially the Caribbean right now, is giving me a better perspective of New York’s various cultures,” Carriman said. “I’ll always come back to New York, forever and ever, but for right now, I’m enjoying the island life.”

Further afield, Rashad McCrorey has been testing out various regions in Ghana that he could possibly call home.

The 40-year-old travel business owner happened to be there on a work trip when the pandemic took hold in New York, and rather than trying to come back, he decided to take the opportunity to suss out the lifestyle there.

In the past few months, he’s lived in various rentals: one in the mountains of Aburi, one in Accra, the capital city, and one by the beach in Elmina, a fishing port on the south coast.

“I’m still a New Yorker, born and raised in Harlem, and I’ll always be a New Yorker,” McCrorey said. “But I know that I’m meant to be out here right now and possibly in the future. A lot of Black Americans are looking to travel or move right now, whether due to systemic injustice or otherwise, and in that way, I think I’m out here for reasons beyond me — to show people back home that they can live abroad, too.”

He always wanted to know if he would like living in Ghana, and he does. But still, it’s likely a temporary move. He’s been keeping up with payments on his rent-stabilized apartment in Harlem because he’s “not ready to give that up so easily,” and he wants options. “I’ve learned so much in Ghana, and it’s been an amazing experience so far. I love being so close to important history and I love living on the beach,” he added. “But everything is up in the air.”

Immigration lawyer Shravanthi Suresh-Silver, 27, and her bioengineer husband Max Silver, 28, are putting the contents of their Battery Park City apartment in storage and hitting the road when their lease is up on Oct. 4.

“Our basic plan is to go south and chase warm weather,” Suresh-Silver said. “We’ve always wondered what it would be like to live somewhere else, but before the pandemic, there was too much at stake to uproot our lives and go test out different options, so we never pulled the trigger. Now is the time to do that.”

They’re looking into a two-month rental in New Smyrna Beach, Fla., followed by a month or so in Miami, and then checking out other locales as they make their way back up the coast — likely returning to New York if and when the opportunity to work remotely comes to an end.

“We both have jobs, family and friends in New York, so it’s hard to cut ties completely,” Silver said. “But it’s great to be able to experience living in other places right now without leaving everything behind.”

How Joel Made a Million Dollars with Freedom Mentor Phil Pustejovsky
FUN FACTS ON USA REAL ESTATE MARKET #shorts #viralshorts #youtube #realestate #viralshorts
Buyers are Liars and Seller are Too Timeless Real Estate Wisdom #shorts #realestate #freedommentor
$70K Profit on Out of State House Flip! – Flipping Houses Long Distance – Numbers and Takeaways
I have the right to poop on the street. #shorts