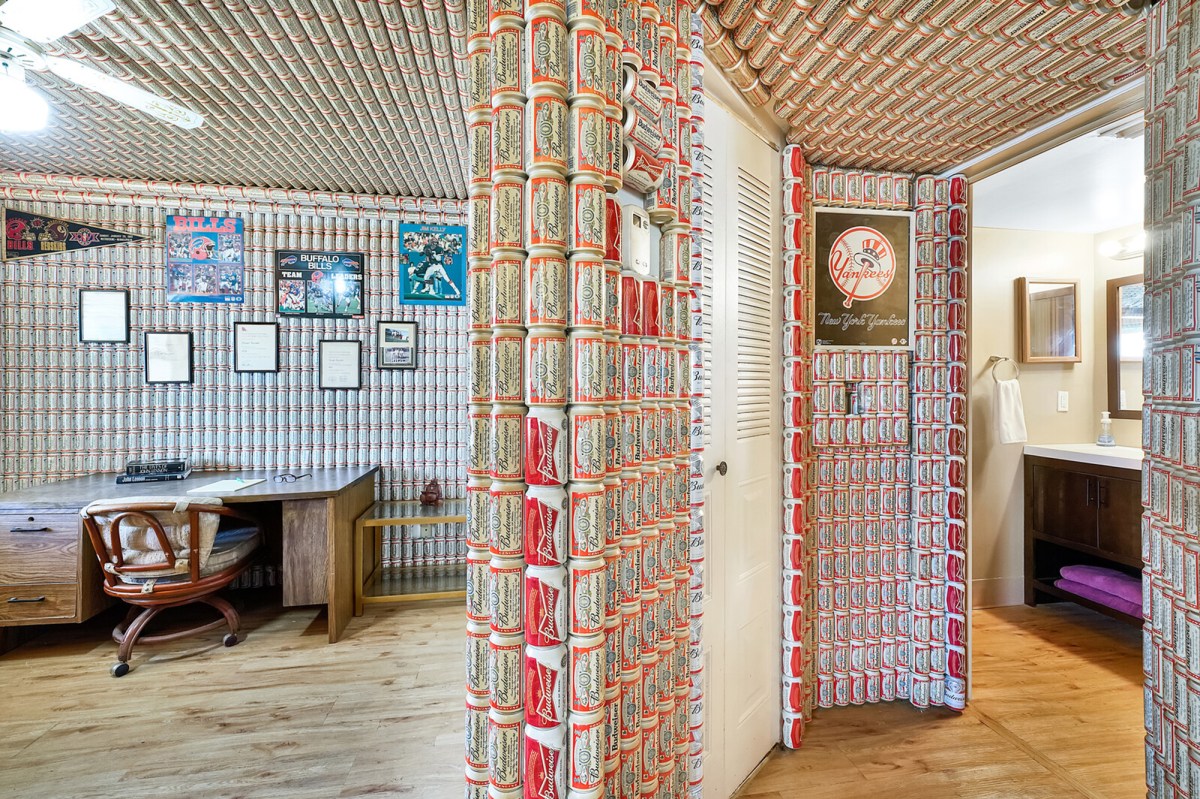 There aren’t 99 bottles of beer on these walls, but there are thousands upon thousands of cans.

Navy veteran Michael Amelotte spent 16 years lining the sides and ceilings of his Florida condo with empty cans of Budweiser.

The estate of Amelotte, who passed away this year, put his two-bedroom condo in Lake Worth, Fla., on the market in August. The apartment ultimately went into contract on Sept. 15 for more than its $100,000 asking price; the buyer is just waiting to be approved by the building’s association.

It helped that the 815-square-foot home, now cubbed the “House of Budweiser,” comes with free brewskis for life. After it listed, Anheuser-Busch caught wind of the DIY project and offered to keep the potential buyer’s fridge stocked with beer indefinitely. On one condition: They can’t touch any of the hoppy decor.

Amelotte, who died at 69 following a battle with cancer, loved a cold one, according to his longtime pal Kris Johnson, who is the representative of his estate.

“Mike drank Budweiser beer since the day he turned 21,” said Johnson, a retired pest control specialist who has also worked as a professional Santa Claus. “He just got a bug one day, and said, ‘You know, Kris, I’ve got so many cans in my house, I’m going to start wallpapering my house with Budweiser. And by God, he did! He drank Budweiser for some 40-odd years.”

The devoted drinker of domestic brew was a native of Buffalo, New York, and served as a radio teletype decoder aboard an aircraft carrier before moving to Florida in the late 1970s.

Amelotte began drinking Budweiser in memory of his father, Johnson said, who also enjoyed partaking in the King of Beers.

Amelotte purchased the corner unit at 4707 Lucerne Lakes Boulevard East in 1986 and began putting cans on the walls about 1990 — completing the project sometime around 2006.

“Every can of beer on that wall was drunk in that house,” said Johnson, who met Amelotte at a Red Lobster, helped him find work at a golf course and was by his side when he passed away. “He did not go through any dumpster, because whenever somebody came over, they brought a case of beer. He was a super guy.”

Design buffs will appreciate the effort Amelotte made to craft crown molding, electrical outlets and air-conditioner vent covers out of beer cans.

“He spared no detail,” listing broker Jesse Kearney told The Post. “The pictures don’t do it justice. Everyone gasps when they see it.”

Despite their previous uses as containment vessels for fermented liquid, the real estate agent added, “there is no smell” from the cans.

“He would drink them, clean them out, let them dry and mount them,” said Kearney, of Kearney & Associates Realty, who marketed the property with partner Kristen Adams-Kearney. “You can actually see where Budweiser has switched over its branding through the years by walking from room to room. It’s impressive.”

While the identity of the buyer has not been revealed as the sale heads for a quick closing, Kearney’s listing marketed the house to the social-media savvy, suggesting that the current décor would be a perfect backdrop for “your YouTube beer show.”

“This is the most unique property we have ever sold,” Kearney said. “We sold properties here in Florida during the mortgage crisis. And we have been in places that were grow houses and wild scenarios like that. None of them compare to this.”

Johnson hopes that the new owner will honor the memory of his friend by keeping the cans intact.

“[Amelotte] was a diehard Democrat who would argue politics with you in a minute,” says Johnson. “He was an excellent golfer with a six handicap. He had a lot of friends, and he was a wonderful man who would give you the shirt off his back. Lord, I’ll tell you I miss him, and it’ll be a long time before I see another condo like he had.”